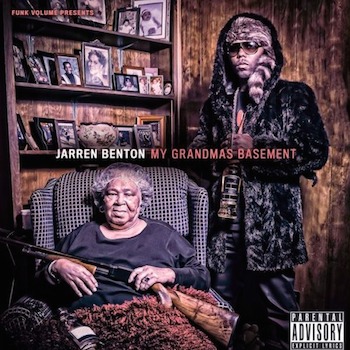 The Ty Dolla $ign, who to some are seen as singers rather than rappers, but considering the current prominence of Future that’s a non-starter for me. For better or worse hip-hop has embraced the singing rapper and the rapping singer – the line between the two now an obsolete notion.

Lost in the debate about whether or not singers and rappers should share the same cover was the fact that upstart rap label Funk Volume found one of their artists on the cover for a third straight year. That’s impressive given the L.A. based imprint has only been in existence since 2009 – they’ve come up from small and unknown to a large buzz in an unusually short amount of time. Co-founder Hopsin can be handed a large part of the credit, but it also goes to their careful selection of like-minded artists who are unconventional and original compared to the cookie cutter mold of the bigger imprints. Dizzy Wright, SwizZz and 2014 XXL inductee Jarren Benton all fit that bill. Benton was a little surprised when Funk Volume opened the door for him in 2012 given he was an underground rapper from Atlanta and the label’s best known artists were from Nevada and California but his artistic creativity was a perfect match.

At a future date we’ll take a Back to the Lab look at the mixtapes that generated the buzz to get him signed, but for now let’s talk about “My Grandmas Basement” – and yes the album lacks the hyphenation you’d expect after “Grandma.” I’m okay with that. Some websites try to insert it back in but when you look it up at retail none exists and given there is none on the cover art or binding the choice is intentional, as is putting Benton’s actual grandmother on the cover. From his coonskin cap to his macabre cinematic raps, everything Benton does as an artist is on purpose and for a purpose – even if that purpose is not obvious on the first listen. That’s led many people to compare him toTyler, the Creator – one which he dismisses on the single “Razor Blades & Steak Knives” but one that’s also unavoidable given the way he purposefully stirs the pot.

“Yeah! Razor blades and steak knives
I’ve been tweaking off of this meth, been up for 8 nights
My producer is Asian – so he ate rice
and practice kung-fu and meditate in the daylight
You a bitch – you probably picket for gay rights
I crack the fuckin jaw with a spinning kick in a cage fight
‘So negative’ – give a fuck what ‘Ye like!
Y’all a bunch of wussies, a bushy puss of a crazy dyke”

If you’re already offended hit pause and step off right now – otherwise you’ll get that he’s in on the joke when he plays his own interview and asks “Do you have anything to say that’s sort of positive?” His answer: “Yup! Suck a dick, suck a dick/suck a dick and by the way – suck a dick.” If you’re not laughing then you probably don’t like Eminem either, another rapper Jarren is frequently compared to. Jarren Benton is to being politically correct as Don Rickles is to being nice to his audience – you either get it or you don’t. He’s not going to apologize if you get upset by it and he shouldn’t. Long-time friend and collaborator Kato produces 50% of “My Grandmas Basement” (if you throw out the two skits) and understands just what matches up with Benton’s torrid verbal torrent. The big booming beat and electronic swang of “I Deserve It” match well with JB’s high powered flow, while “My Adidas” slowly builds up to the machine gun scratching of DJ Hoppa, and as a throwback myself I appreciate the Run-D.M.C. samples found within.

“My homeboy went to jail in them; next day he made bail in them
Got a pair of ‘das so damn cold with the leopard print and the tail in them
Get pissed off when I scuff ’em up, I toss them out when I fuck ’em up
and get a fresh pair the next day with 4 straps that buckle up
This the brand that I represent, put that on a testament
This Eastside, these 3 stripes, I step out so elegant
Made hip-hop in these sneakers, for that a pledge of allegiance
It’s me against the world, middle finger to my foes in my Adidas”

Signing to Funk Volume expanded both his production and guest star opportunities and Mr. Benton has taken advantage of both. The Spittzwell produced “Dreams” is the kind of song that transcends his shock value reputation and is an anthem where JB vows to “wish upon a ghetto star, clutchin on my hopes and dreams” and rise above the meager Decatur/Atlanta circumstances he came from. Anybody who tries to pigeonhole Jarren Benton as a shock theater rapper will have this song test their narrow definitions to the limit. He also tests your expectations he’d only work with either Funk Volume or Southern-based rappers by teaming with Philly’s gruff voiced Vinnie Paz on the heavy hitting “Bully.” Pazienza’s cameos can be scene stealing, but Benton shows he can hang when he spits lines like “All I need is one mic, three syringes and two rocks/I rap like I got ‘Pac’s dead corpse in a shoebox.”

Speaking of unconventional team-ups, J.B. pulls in the sinister minister of anti-mainstream rap R.A. the Rugged Man for the song “Smells Like” along with Mic Buddah – another excellent Spittzwell track. There’s not a lot to complain about on “My Grandmas Basement,” but if you try really hard you can “PBR & Reefer” is trying too hard and ends up sounding like a parody of Memphis hip-hop. It’s a rare miss. One can go either way on the title track as well – it’s an experimental beat from Oh that Benton rips to shreds like any other that’s put in front of him but some listeners will feel that it lacks a head nodding factor. Neither one takes away from songs like “We On (My Own Dick)” featuring Dizzy Wright & Pounds or the twisted “Cadillacs & Chevys.” There are times that lines like “My girl say her period is really late/I got a home abortion kit, we fin’ ta get it straight” will push your taste limits to the edge and perhaps over – but the fact Benton relishes pushing buttons is what makes him worthy of being in XXL’s Freshmen Class in the first place. “My Grandmas Basement” confirms they got it right.