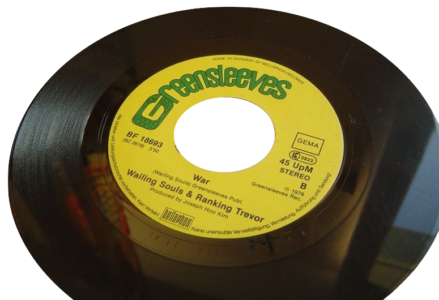 Waxing Nostalgic for the Record Store

The record store/music store used to be a place where you felt a palpable sense of excitement the day a new album was coming out. Driving to the store where you wanted to buy it, holding it in your hand and anticipate what it would sound like, admiring the cover art and reading who (if any) guest stars made cameo appearances on the album all heightened the experience. The whole process of forking out hard earned cash to a store clerk, whether a large retail location (Sam Goody, Tower Records) or small chain like I used to frequent (Co-Op Records) was as much a part of the music as the album itself. Vinyl, cassette or compact disc – the format didn’t matter – you could enjoy splitting, cutting or tearing open that shrinkwrap. There was even a “new music smell” and some record labels smelled different than others – Tommy Boy Records for example was very distinctive.

I miss the new record smell, but more than that, I miss the whole record store experience. It was a social environment. You’d go there with your friends, you’d meet your friends there, or your friends might even be working behind the counter taking your money. The opportunity of browsing through a physical selection of albums is not to be discounted either. While online music retailers

certainly offer the chance to preview snippets of songs, they don’t have the bargain bin full of discount albums that make you think “take a chance – this might be good – and if it isn’t you’re only out a few bucks.” Some innovative retailers even put stereos and headphones in stores and would let you play the bargain bin albums for yourself. Wearing the same headset a hundred other people put on before you? Scary prospect if you’re a germaphobe, but irresistible opportunity if you’re a music aficionado.

The music industry has nobody to blame but themselves for the decline of the music store. As much as I might like to wax nostalgic about the place and the process, they painted themselves into a corner with high prices and limited choices. The early days of Napster blew the doors wide off traditional brick and mortar stores. Though it was incredibly illegal to share and download millions of songs the way Napster did, and inevitably wound up being forced into bankruptcy and sold (ironically to a large retailer), the a la carte selection process of picking only the songs you want from the artists you like foreshadowed the digital music revolution

as we know it today. No one has to buy an entire album any more just to get the hot single on the radio that wasn’t issued as a 45, cassette or CD-S. Conversely no one gets to discover the other songs by an artist on an album BECAUSE they can buy individual songs and skip the rest. It’s a mixed blessing but it’s the inexorable and inevitable march of technology.

The “record store” as I knew it from a young age is now an antiquated notion, and if today’s generation buys music at retail, it’s probably at a box store like Best Buy, Target or Wal*Mart. There are a few places that hang on and fight the odds, small stores with a dedicated clientele and niche products, which is why things like Record Store Day still exist. It’s also telling that in a digital age we need a “record store day” just to drive people to these retailers, when more and more artists give away entire albums for free on websites like Bandcamp and DatPiff. When you can get half of your music for free, and buy the other half online, what value is a record store to your average millennial?

I’m not here to fight the power or buck the trend. I’d be a hypocrite if I didn’t mention that I LIKE the convenience of a la carte shopping, or the chance to download entire albums (or “mixtapes”) for free. It may just be that it was meant to be for music stores to fade away into obscurity. If you’re under 21 and don’t miss what you never had, I don’t blame you. If you’re 30-something or older and miss the music store experience, even a chain store like Tower, I understand how you feel. It’s still possible in our digital age to buy physical compact discs to take home, but it’s not the same when you’re buying them at the same place you buy groceries and diapers.

I’m waxing nostalgic for the record store – for the days when you were so excited to buy music you’d rip the shrinkwrap off IN the store after paying for it just so you could inhale the new music smell and read the liner notes before taking it out to the car to play it or sticking it in your Walkman/Discman/cassette deck/in-dash CD player. It’s a fond memory but one that for better or worse our digital music and iPods are making obsolete. I need to visit a record store soon – but first I need to find one. The last two I frequented both closed.