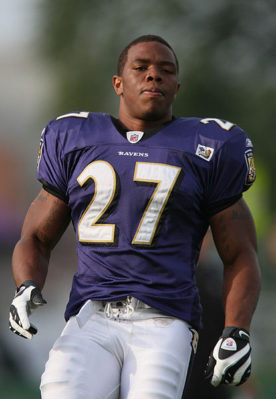 The Baltimore Ravens Finally Get It Right (Ray Rice)

In a previous editorial about Ray Rice here on RapReviews, I discussed how completely unacceptable the NFL’s two game suspension of Rice was. Rice “allegedly” assaulted his then-fiancee Janay Palmer at the Revel Casino in Atlantic City back in February. I put “alleged” in quotes because they were the only two people in the elevator, and he pulled her unconscious body FROM the elevator. With or without video to prove that he cold cocked her and knocked her ass out, it wasn’t hard to draw a conclusion based on the available evidence, especially given the callous way he regarded her limp body afterward. It’s not as though he called for medical help or hotel security or even the police – to either investigate, or to arrest him if he wanted to confess. Nope. He just dragged her away the way Walter White would drag a rival through the basement of a laundromat – all that was missing was the hydrofluoric acid. *

I know some people who are apologists for football players, and without naming their names, I’ll say they like to find excuses why major NFL stars are never guilty of anything. Ben Roethlisberger didn’t sexually assault a woman. Donte Stallworth didn’t mow anyone down with his car. Aaron Hernandez didn’t arrange for or participate in a murder-for-hire. Ray Rice didn’t beat the crap out of a woman. “Innocent until proven guilty” is the order of the day and unless they’re convicted in a court of law it’s not true. And sometimes you do beat the rap. The charges against Roethlisberger were dropped, and the NFL gave him a suspension as inadequate as Rice’s. Stallworth accepted a plea and did a very small amount of time behind bars for DUI, then settled with the family of his victim. If Hernandez has a lawyer like Johnny Cochran, he may never do any time behind bars at all – after all there’s no video of Hernandez doing anything. Until today there was no video of Rice knocking out Palmer either. Thanks to TMZ that’s no longer the case.

To the surprise of no one the Baltimore Ravens terminated Rice’s contract hours after this video, and the NFL followed up by announcing that Rice was suspended INDEFINITELY. In short that means his present tenure as a football player has come to an abrupt end and his future as a NFL star is tenuous at best. Rice forfeits millions of dollars per year on his contract that the Ravens are no longer obliged to pay him, and right now he’s probably hoping he can trust his accountant. Assuming he still has some or most of the money he made to date he can probably live comfortably in a forced retirement – if not now’s the time to start looking for a second career.

I’m happy to live in a country where “innocent until proven guilty” is still the law of the land. Occasionally that results in a scumbag with a slick lawyer beating a case, but it’s far better than the alternative – confessing your crimes first then being charged with breaking the law after the fact (think North Korea). Whatever Ray Rice thinks he can get away with though, he just found out there are consequences for heinous behavior, with or without the possibility of a prison cell. In the court of public opinion he was already guilty of being a terrible human being, and a multi-million dollar franchise like the Ravens was apparently willing to live with that PR hit… up to a point. Better late than never I suppose but kudos to them and to Roger Goddell for finally doing the right thing. Whatever happens to Rice from this point on, he has to live with himself without ongoing financial support of his misogynistic and moral failings. No more saying that players like Rice are “the victim” because wealthy people are preyed upon by the media and accusers who are making things up in order to get a cash settlement. The victim here is the woman who got knocked around like a tackling dummy and dragged around like a sack of potatoes. Sometimes what you see is EXACTLY what it appears to be.

* For what it’s worth MythBusters proved that hydrofluoric acid isn’t as effective at breaking down tissue as it was shown to be on the TV show, but it definitely made for an impressive visual spectacle when that bathtub dropped through the ceiling of Pinkman’s aunt’s house.