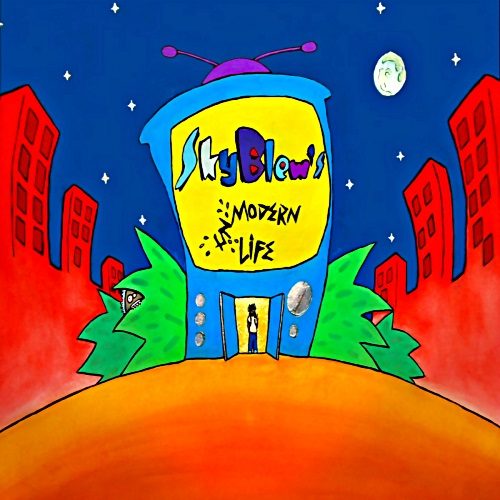 There’s no way I could resist checking out this album. I’ll confess to being a fan of the off-beat and whacky Nickelodeon cartoon “Rocko’s Modern Life,” and like some of Nickelodeon’s other colorful offerings (such as “Ren and Stimpy”) I often marveled at the gags and double entendres that were CLEARLY meant for an audience older than the channel’s demographic would seem to indicate. Even though [adult swim] clearly defined the genre of late night cartoons that could carry a “M” rating as a popular and profitable niche, Nickelodeon was getting away with being adult on the low.

Well… they didn’t ENTIRELY get away with it. Episodes of “Rocko’s Modern Life” often got censored before AND after they aired for the first time, such as Rocko’s best friend Heffer (a cow) having a rated M moment with a milking machine. They even had to rename a restaurant from the series called “Chokey Chicken” by the fourth season. Even after the show was canceled they kept on editing the replays on Nickelodeon, and some episodes were pulled from air altogether. The show pushed the envelope and that envelope got pushed back time after time. Had it come along in the 2000’s instead of the 1990’s it might now have the status of “Family Guy” or “Aqua Teen Hunger Force.” Instead it’s a cult classic – but at least SkyBlew appreciates it too.

The other reason I couldn’t resist checking this album out is that it’s the first release that’s NOT byRandom a/k/a Mega Ran on his own RandomBeats label. That kind of endorsement shows that Ran has faith in SkyBlew to keep his reputation for quality hip-hop in tact, as well as a boss minded expansion by Ran to become a full service hip-hop imprint as opposed to just being his personal distribution outlet. There’s definitely nothing wrong with owning your own label just to put out your own ish, but the ever-prolific Ran can probably give himself a little breather just by having artists under his wing, and they in turn benefit from his name and popularity. Win/win. It should come as no surprise that Ran makes a cameo on the album on the track “Plight of the Shoobies.”

SkyBlew’s debut is a deep one, as “SkyBlew’s UNmodern Life” clocks in at well over an hour in length, spread out over 19 tracks. It’s thanks to a good selection of different producers that this doesn’t drag on, and here too Ran makes an (8-bit) contribution on “Makeshift Flow.” SkyBlew’s style reminds one vocally of an early Lupe Fiasco, though one wonders what he might have thought of it given they’ve shared the stage together before. Blew is described as “dabbling in nerdcore” but “refusing to be pigeonholed” and that is a fair assessment. “The Ballad of Pigeon Man” for example is the kind of folksy storytelling once associated with Speech of Arrested Development.

The best tracks are the ones that break significantly from established patterns of hip-hop style and production, such as the Oh Genius laced “Sally’s Comet” featuring Sugelema. The track never decides if it wants to be a whistled tune, a jazzy brass feature, or a piano-tinged melody – it flirts with them all and never commits to just one. SkyBlew proves himself a capable and versatile rapper over these creative tracks, and the album is well enough mixed that he never gets lost in the grooves. He’s got a lot to say on “UNmodern Life,” at times so much so that it’s overwhelming, but then a humorous love ballad like “Tech Support Girl” pulls things back into focus.

I can’t predict whether or not SkyBlew will have a long and prosperous hip-hop career, but I can say for certain that Random will not be disappointed in the effort of his debut artist, and neither will the people who decide to give a newcomer on his imprint a chance.