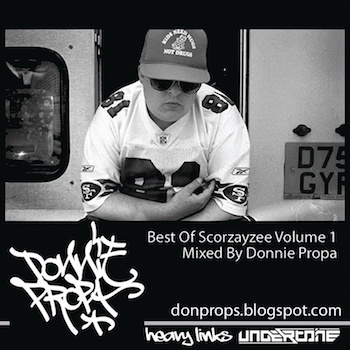 Scor-Zay-Zee is a name that is revered in the UK, despite having never put out an album. You have got to have some huge cajones to drop a “Best of” mixtape that consists entirely of singles and tracks done with established artists like DJ Vadim and P Brothers, but all that remain unknown to most UK hip hop fans, let alone hip hop fans in general. Scorz (as he’s affectionately known) is widely regarded as one of the best emcees in England, having built himself a reputation as a likable personality who turns up on other artists’ work to body their shit, or occasionally delivers classic songs (“Great Britain”). Think of him if you will as the Percee P or RA The Rugged Man of the UK. What distinguishes Scorz from those heavyweight spitters is that he’s not seen as a pure fire-breather in the booth. He usually has a message and when he does brag, it’s done in a light-hearted manner that’s ultimately harmless. It’s worth noting that he has a strong Nottingham accent and a rapid-fire delivery, so any Americans reading this have been warned.

To ease you in, a good starting point is the film/mockumentary “Le Donk & Scor-Zay-Zee”. Starring Paddy Considine (of Dead Man’s Shoes) as an irritating yet loveable agent trying to get unsigned rapper Scor-Zay-Zee a concert, it not only paints the picture of Scor-Zay-Zee as a talented rhymer, but contains some of that Ricky Gervais-style cringe-worthy humor that now seems mandatory in comedy. It’s worth noting that Scorz semi-retired from hip hop for a few years, to practice Islam. He has also confirmed a reason he stopped rapping was because he didn’t have anything to say, which would leave hip hop scarce of rappers if everybody followed that mind state. This mixtape then, is a perfect way to remind us why Scorz’ Kickstarter campaign to get an album done is still anticipated by many hip hoppers.

This mixtape (mixed by Donnie Propa) claims to be mixed entirely with 12″ vinyls, which is an impressive feat given many if not all of these tracks are now difficult to find. The most impressive thing is Scorz’ best known track, “Great Britain”, doesn’t even make the cut here which is a big surprise. It’s almost assumed that the listener has it already. Even his track that made the radio back in 2002/2003, “Creps”, a song not about French pancakes but about sneakers, is excluded. It did for Nike what “Great Britain” did for the UK government – called them out and gave them what for, yet also showed empathy. Despite these strange omissions, the gem “Wishmaster” is here, a track I recall doing the rounds on BBC 1xtra back in the early 2000s. The vocabulary is bananas and a staple of Scorz’ style throughout the mixtape, but “Wishmaster” is still the best example of a wild emcee bottling up his creativity and spraying it all over a superb DJ Fever production. It’s a barrage of bars ranging from the vividly humorous image of his engineer mixing tracks with oven gloves on, to claims that his rivals couldn’t even kidnap a paper plane. It’s the embodiment of a man that still sounds like he raps for fun. If you were to compare Scorz to any American artist, it would invariably be Big L, although Lamont Coleman’s lyricism was noticeably more violent, which given England’s lack of guns, makes sense.

The beautiful thing about this mixtape is its ability to showcase every aspect of UK hip hop. There’s the typical technical rapping ability on show with the few freestyles here, there’s tomfoolery and self-deprecating humor on “Reality (Acapella)”, and straight up bangers in the form of “Archery” and “Bang Your Head”. Serious subject matter such as lack of money (“Want What’s Yours”) is actually an area under-represented with the aforementioned favorites missing. There’s an inconsistent recording quality to some of the tracks, veering between the bedroom quality of “Freestyle Frenzy” and youthful “Raw” where a notable change in Scorz vocals affects the cohesiveness. It’s reminiscent of Royce Da 5’9″s “Build & Destroy (The Lost Sessions)” compilation which threw together a bunch of Royce’s songs without any real consideration for the overall product.

I want to recommend this mixtape as an essential collection from an artist that is held in such high regard by fans and his peers; an educational slice of UK hip hop if you will. For the most part it is, and the fact that it is FREE means it is definitely worth a download, but it could have been the perfect compilation if “Creps” and “Great Britain”, arguably Scor-Zay-Zee’s best songs, were included.