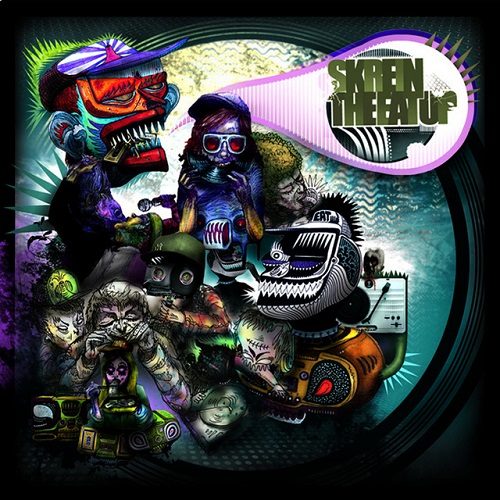 Skrein :: The Eat Up

Skrein sounds like a nasty, dirty piece of filth yet until he released 2009’s “The Eat Up”, his tracks felt like warm hugs on a cold day. Timid, affable rhymes often wove their way across beats that manage to get the head nodding and the neck-hair standing on edge. Songs like “The Youth” and “The Return of Hip Hop” were sombre tracks from the mid-2000s that first put me on to Skrein and there was a decent level of hype for Skrein’s debut in 2009, despite a lack of clarity on what his debut really is.

It’s unclear whether “The Eat Up” is a mixtape or his first album as DJ IQ mixes the tracks in to each other. There’s brutal honesty that tells us Skrein had a buck-tooth, a side-parting and nerd glasses, but bringing home a bag of new vinyls was what he looked forward to, citing Slick Rick and The Pharcyde as his favourites. Their quirky styles are clearly an influence as Skrein has bags of character throughout and a similarly unique sense of humour.

“Skrizzle” sees Skrein jokingly avoid women harassing his phones (including a Motorola brick) but descends in to a bunch of artists prank calling him. It’s largely pointless, but nonetheless entertaining. While “The Eat Up” is scattered with enjoyable moments, it’s executed haphazardly. Drifting between violent intimidation (“Reign In Blood”) and laid back tales (“Mother Earth”) means the listener is grabbed and thrown in to different parts of Skrein’s life.

“How’s It Feel” is a standout track, not just because it’s great but because it’s a massive curveball in the middle of the record. It sees Plan B tackle the issue of gangs and knife crime in London – it’s a chilling tale of peer pressure and bullying that has a smart twist, revealing itself to be a psychotic, schizophrenic’s inner conversations. It’s nowhere near the epic “Dance With The Devil” by Immortal Technique, but is a similarly gripping track that’ll you’ll want to keep for your headphones rather than the car.

The rest of the record is made up of satisfying collaborations – “Mine For The Taking”, “The Eat Up Part 1” and “The Eat Up Part 2”. The two Eat Up songs are excellent, not just because of their pounding production, but because each emcee explains how they aren’t there to support these American acts at shows, but to steal their shine on the night. Skrein even mentions that The Beatnuts can vouch for him stealing THEIR night. Doc Brown (now a successful comedian and actor) shows why he is still respected by hip hoppers:

“I’m gonna show you how we run it this side of the Atlantic
where the Thames flows rancid, feds are frantic
crimes, caught red-handed for what ya man did
jaws get broke and old folks, they can’t stand it
and in New York they think it’s all tea and biscuits
over here I’ll show you it’s real, don’t get it twisted
because there’s a sick amount of blacks in jail
when there’s crack for sale, matter (of) fact
it’s mad as hell plus we rap as well
so don’t come boyin’ man off when you run stage
fuck around and how do you say it? Get ‘John Blazed’
you was big in the 90s but then America turned spiteful
now you’re touring all over Europe hoping we like you”

Stig of the Dump provides what should be a typically ignorant ode to alcohol on “Raise Ya Glasses”, but when compared to his solo material is surprisingly tame. In fact, other than the hook, the song is nothing to do with drinking. It’s rare that I want to hear an artist rap about getting plastered, but Stiggy Smalls is an exception to the rule given his history of humour on songs such as “Fatty & Specky”. The worst moment on the record comes courtesy of “Crazy Tone Skit I” – a vulgar 3+ minutes of abuse aimed at Skrein plays out for what seems like 3 hours while the listener awaits the next track. It’s up there with Dr. Dre’s “Pause 4 Porno” and countless other skits – you listen once and never again.

Despite some jarring moments of juvenile behaviour, “The Eat Up” is a strong example of an emcee that is oddly captivating and incredibly likeable. Skrein’s whisper-y delivery is distinct and songs like “The Weary Traveller” and “Mother Earth” showcase a young man trying to grow up; one who appears to be at a turning point in his life. Skrein has worked with so many artists over the years, it’s no surprise that he rarely finds a moment to himself on “The Eat Up”, but it’s a credit to his character that he isn’t eaten up on his own record.