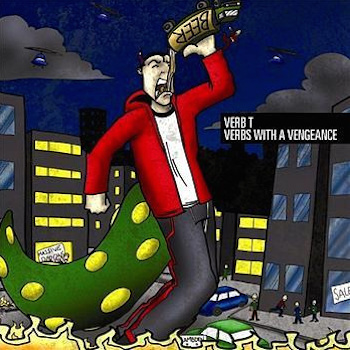 Verb T :: Verbs With a Vengeance

At school I recall being taught that a verb is a “doing word”. It’s hard to think of a guy who isn’t constantly “doing hip hop” more than Verb T – since he emerged ten years ago alongside Kashmere, he’s released eight albums and three EPs too. There aren’t many emcees that release a record every year, particularly in England, but Verb T has and now stands as a reliable emcee you can count on to drop a strong album. I’m not going to delve in to too much history on the man himself, but it’s widely believed that his 2010 release “Verbs With a Vengeance” is one of his better, if not his best album. The cover art shows an illustration (presumably of Verb T) as a Godzilla-like figure, boasting a tail and horns as he swigs at a can of beer.

England has long had a reputation as a nation of drinkers; you only have to listen to 90% of guys dropping records in 2014 to realize that this generation of emcees are proudly addicted to drink. Watch any Don’t Flop battle on Youtube and you’ll see not just punters, but participants proudly grasping a pint of watered down lager. These guys aren’t bragging about splashing cash on Henny or Cristal, they’re boasting of drunken, reckless behavior that Spanish island dwellers witness on a daily basis each summer. If you can’t re-enact Coyote Ugly with tribal-tattooed, 20-stone rugby players, apparently it wasn’t a good night. This glorification of binge drinking has seeped in to hip hop, where emcees are now claiming to be proud of their drunken behavior. They revel in being grimy and broke, as if body odor and a lack of employability somehow make ladies labias foam uncontrollably.

It’s as if the skit from ODB’s debut album (where a lovely lady finds Russell Jones’ Neanderthal-like qualities irresistible) has been adopted as a whole mindset that stretches over the course of an album. Verb T however, has never fully embraced that aspect of hip hop, instead feeling more likable and approachable – he may be drinking excessively, but he’s doing it at home in a non-provocative manner. He’s lazy, but he’s a procrastinator rather than an outright bum. It’s these subtle differences that push Verb T in to a different group of artists.

Comparisons with Jehst are inevitable given their penchant for laid back deliveries and ponderous rhymes, although Verb T never really reaches Jehst’s level of eloquence. Given Jehst is frequently cited as one of (if not the) best emcees to emerge from England, it’s good company to keep. What Verb T has going for him is accessibility, in particular, a knack for crafting catchy hooks that grab you and swing you around – his albums are always thumping. “Verbs With a Vengeance” is one of his best albums that strikes a balance between playful youth and level-headed maturity.

UK hip hop is often (rightly) dismissed as being stuck on that 90s, New York vibe – much of it is. Inevitably, songs like “Shadowlands” and “Lost World” possess hefty kicks and snares that are of that ilk, but there are also experimental productions from Verbs, such as the Grime-like “Snapshot” that highlights how to dispose of a body. I’m certain that the classic SEGA video game Streets of Rage is sampled on “Hourglass”, a song all about how time flies by. It’ll probably connect with those who grew up on sprite-based video games, tapping in to that bastard called nostalgia.

Having a self-deprecating sense of humor is an important part of being British – being able to laugh at yourself is why we frequently spawn great comedians and comedy actors. Verb T isn’t a particularly funny guy, but he’s light-hearted enough to raise a chuckle here and there. I’ve found myself mentioning humor in every review this month, and that’s testament to the genuineness of the artists representing the UK. They don’t take themselves too seriously, which may well be holding them back from further exposure (unlikely), but it acts as a great soundtrack to the real world.