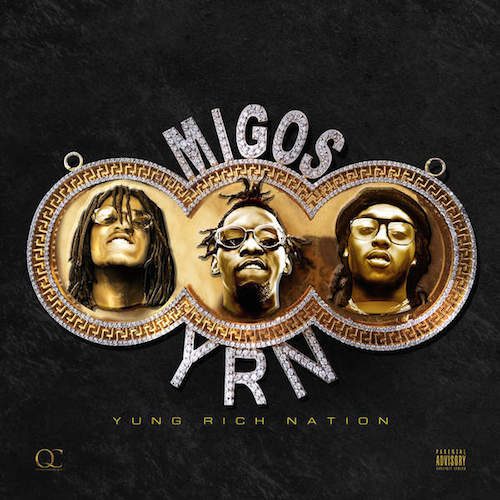 Migos (Quavo, Takeoff and Offset) are at the forefront of a next wave of Southern hip-hop. They tread the same roads paved by the pioneers of Southern style and swagger – the likes of Geto Boys, Eightball & MJG, OutKast and yes even Gucci Mane. The latter name is important and we’ll get to why in a minute, but the point I want to get across before we get any further by throwing out these legendary names is NOT that Migos are legends themselves – just that Migos are part and parcel of a tradition of Southern artists who made regionally popular music that suddenly gained mainstream popularity and tons of imitators. Each generation comes up in the shadow of what the previous one made a hit, and you can hear the influences of previous Southern impresarios on “Yung Rich Nation” – the accents, the swagger, the singing and the smooth tracks with heavy hitting bottom.

It’s going to take a long time paying dues before they reach legend status. One major label album and a few mixtapes aren’t enough to establish them at that level. On the other hand I find the casual disregard Migos receives from “old heads” in my generation a little suspect. On the surface they might have seemed like a one hit wonder with little to say based on how vapid and repetitive their hit “Versace” was, but as I’ve spent time getting to know Migos I’ve realized these young bucks from Atlanta can’t be properly understood in six second Vine clips of their music on Tumblr. “Yung Rich Nation” has plenty of well thought out songs with better concepts, storytelling and delivery than can be accounted for in the songs that have gone commercial. Let me put it this way – judging Migos on “Versace” alone would be like trying to judge Digital Underground just for “Kiss You Back” or Tupac Shakur for “If My Homie Calls.” Songs that go mainstream aren’t the same as album songs. Take “Highway 85” for example:

Quavo: “Then I looked around the corner it’s Gwinnett County law
I rolled down the window, it’s the officer
Put his nose in my car, he say he smell the herb
He opened up the door and asked me can he search?
Hell naw, officer you know how much I’m worth?
I’m worth a million”

Takeoff: “Mirror, when do you picture the Migos falling off?
The mirror said you stupid boy, don’t ask that question at all
I see red and white blue lights while I look in my rear
Put the gas out, it’s Friday and it’s smokey in here
Fuck another high speed chase, that’s when the hemi kick in
Forgive me for my sins, I ain’t goin back to the pen”

It’s not as though Migos is pulling out random examples of harassment by law enforcement – all three members of the group were arrested an April concert and only two-thirds of the group are out on bond (stay strong Offset). They’ve been accused of instigating violence at their concerts, but that’s another reason I referenced the legends in question at the beginning of this review. People used to say the same things about the Geto Boys when I was growing up. When Bushwick Bill shot his own eye out in a failed suicide attempt, it was seen as evidence that their critics were right. The mainstream media and in particular right-wing outlets like FOX News (if it can even be called “news”) have always had a negative bias about hip-hop music and culture, but no one seems to blame Hollywood for instigating violence when movie theaters get shot up.

The young men of Migos are a reflection of today’s young hip-hop culture, both its positive and negative aspects, and you can’t really evaluate the totality of the trio without considering they don’t “inspire” violence any more than the ChiRaq rappers of Chicago do theirs. 2nd Amendment rights are more valued than black lives, and on the flipside of the debate no amount of criminalizing semi or fully automatic weapons has brought down the murder rates in Baltimore or Miami. It’s a violent society, so when Migos say that “Gangsta Rap” is back, the truth is it never really went anywhere.

I did say we were going to come back to Gucci Mane though, and you can’t write about Migos without addressing that connection, which comes in a variety of forms. Gucci’s best known production affiliate Zaytoven does a lot of their beats. His former manager Coach K is their current manager. The group themselves attribute their style to being a mixture of both the critically acclaimed legends of paragraph one and the “new style” that Gucci Mane brought to the scene when they were growing up. I feel like I hear it when I listen to “Yung Rich Nation,” but I’m also happy to say that inspired doesn’t mean “imitating” at all. Their flows are more polished and easier to understand, and their style of occasionally sing-rapping is more closely tied to Future or T-Pain than Gucci Mane. I’m either getting used to the sound after hearing it so much that it’s no longer obnoxious, or the younger rappers coming up have learned how to do it more effectively in a song to make it still feel like hip-hop and not like bad R&B. All of Migos interweave it effectively on “One Time.”

Don’t get it twisted and assume that I’m saying everything is all gravy with Migos. The production of Honorable C.N.O.T.E., Murda Beatz and Deko among others is a large part of why “Yung Rich Nation” is so listenable. There’s a compelling dischord to tracks like “Trap Funk,” which also serves as an accurate description of their style. Drums, pianos and horns drop in and out or suddenly repeat, and it’s only as you listen for longer and longer to their tracks that patterns start to emerge. Takeoff gets a sly reference to how it breaks up in when he says “Same keys you’re hear playing on the piano, I got them wrapped up in Saran Wrap.” It’s choppy, it’s bass heavy, and it’s different from most of the rest of today’s artists in a very good way. There’s an undeniable fun to songs like “Pipe It Up,” even if you have to at times ignore an unnecessary vein of misogyny that runs through it and many of their other tracks. You might also accuse them of glorifying the trap life, but the longer I’m around covering hip-hop the more I get tired of these same accusations being gussied up and trotted out again like they’re fresh. People accused N.W.A of glorifying a criminal lifestyle too. If you don’t want to hear young people rapping about guns and drugs, how about creating some opportunities for those same youths to get ahead, instead of letting white flight take all the tax revenues from the schools and leaving the economically disenfranchised with nothing but dope dreams? Migos don’t glorify the trap, they reflect it, and when the hood doesn’t need the trap then there won’t be “Trap Funk” any more. You can dismiss Migos if you like, you can even try to lock them up, but you ignore them at your own peril.