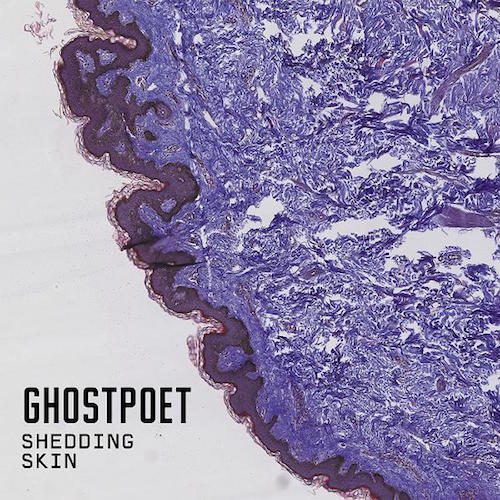 While I enjoyed Ghostpoet’s 2011 debut “Peanut Butter Blues and Melancholy Jam,” his 2013 follow up “Some Say I So I Say Light” offered diminishing returns. He sounded weighed down, and there was an amorphousness to too many of the songs. Ghostpoet may have felt the same way, because he changed up his sound for this year’s “Shedding Skin,” ditching the downtempo electronics in favor of a live band. It’s slightly risky proposition that pays off, infusing Ghostpoet’s sleepy, depressive vibe with just the right amount of energy.

The album title seems to reference more than just Obaro Ejimiwe’s new sonic direction. Much of the album deals with breakups. “That Ring Down the Drain Kind of Feeling” is about being suicidally depressed after seeing your ex with a new partner. “Sorry My Love, It’s You Not Me” is about a woman realizing she has to dump her boyfriend while her boyfriend tries in vain first to stop her, and then to convince himself that it is the right move. “Yes, I Helped You Pack” is about a couple coming to terms with the end of their relationship:

“Now it’s bigger than you and me, think of the kids
All the screaming and shouting out loud, they’re sick of it
I thought maybe somewhere there’s a cure, there ain’t a fix
You deserve better than that my love, better than this
Better than this”

These are all heavy topics, but his new band helps keep things moving. “Yes, I Helped You Pack” has a propulsive rhythm and devolves into squalls of guitar noise, making it feel like a relationship spiraling out of control. The mournful guitar on “That Ring Down the Drain Kind of Feeling” perfectly echoes the despair of the protagonist.

While there is still a hip-hop vibe to the record, thanks largely to drummer John Blease, there is also a distinctly indie feel as well. It is a guitar-centric album, focusing on more traditional songwriting and song structures, albeit all with Ejimiwe’s trademark croaking vocals. He enlists several female vocalists, including Nadine Shah, Melanie De Biasio, and Etta Bond, who offer a nice foil. Given that the album is so focused on the misery of a guy getting dumped, it is good to have the female perspective as well. The female vocalists really make the album by offering just the right amount of variety to offset Ejimiwe’s somewhat monotone singing style.

As an artist’s career goes on, they face the choice of whether to keep making different versions of the same sound, or whether to totally change things up. Ghostpoet deserves props for having the courage to try something new and potentially risky. He deserves even bigger props for making that risk-taking pay off. “Shedding Skin” is a step forward for the artist, and worth checking out.