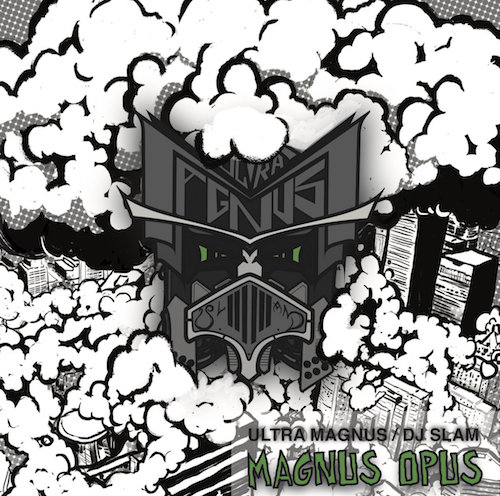 For this review of “Magnus Opus” I’m going to start seemingly at random on the track “Thirst Trap” just because several things caught my ear about this particular song right away. First and foremost the call and response at the beginning of “Can I have it like that?” and a posse yelling back “I want it like that!” stirred up fond memories of a late 1980’s and early 1990’s era of rap where seemingly every MC rolled with a crew and they all got love on a track too — besides the fact it made for a great performance song on tour when the audience could yell back the response. The internet made us all more interactive and yet somehow made hip-hop LESS interactive. Speaking of things we can’t get back though, Magnus is seemingly unafraid to pay tribute to other emcees on his bars, as he imitates both Run and Method Man within the space of about 15 seconds, then drops a Biz Markie reference and claims a chick hating on his style caught “The Vapors.” At one point during this song I actually caught myself thinking I had somehow dug up an old Dana Dane record and was playing that by mistake.

Now I’ll admit I’m a sucker for classic hip-hop styles and references, but I’m an all day sucker for quality hip-hop in general. Since my first exposure to Ultra Magnus and his faithful compatriot DJ SLAM!, I’ve gotten the distinctive impression this duo would rather make the kind of hip-hop they want to listen to than the kind of rap music that would top the charts. While it could be argued (and some music scholars already have argued) that “the underground” as such no longer exists as a force to both influence and ultimately replace what’s mainstream in hip-hop, you can still have “outsider music” even if it’s accessible at a widespread mainstream level. That’s what Ultra Magnus and DJ SLAM! sound like to me – they’re a Toronto tag team that are perfectly content to chart their own course and dare listeners to follow along. Referencing Blahzay Blahzay on a track, a seminal obscure rapper in his own right, certainly isn’t going to earn them anything other than brownie points from hip-hop crate diggers and rap bloggers – and yet “North Is in the House” featuring Dynamic is worth listening to whether you get the references or not (there’s a Lauryn Hill one too).

Furthermore you’re probably appealing to an audience of exactly ONE person (ME) by sampling from Mozart’s “Requiem” for “Bossanova” but this is a case where I absolutely unapologetically don’t give a F#$K if nobody likes this song other than me and the two people who recorded it. Classical samples in hip-hop have been my jam ever since Xzibit dropped “Paparazzi.”

There aren’t a lot of big name guest stars on this album, save for Dan-e-o on “Criddown,” but the good news is that even when Magnus shares the track with a Canadian hip-hop legend he’s able to hold down his own space — even letting Dan go first on the track — and make no mistake Dan rips it with bars like “Better than anything you’ve done or will do/This ain’t a video game, no coming back after I kill you.” Magnus still represents when he gets his chance to shine and once again manages to drop an old school (Kane) reference in the process.

“Now come, get some, you little bum
Drunk off JT and 151
Richie in +La Bamba+ lady drama got these whores risin
sorta like the Earth to meet the sun
And my DJ’s the cut chemist catalyst
You +Birds+’ll get mocked yo, word up to +Atticus+
In this f—-n world of computer cutthroats and fake savages
Ultra Magnus is the manifest…”

Now there are some songs that either don’t hit the mark or are going to require a few more listens for me to warm up to. “4 the People” featuring Snaggapuss is dark and mysterious like a Gravediggaz track, but this is a throwback that doesn’t quite hit the mark for me. “Junglist Soldier” featuring Kondriah and Practical Stylist has that UK grime stylee, but it just makes me want to listen to UK grime emcees instead. A few misses don’t detract from the hits though, and once again I find myself pleased to report that Ultra Magnus and DJ SLAM! are on to something. They may not top any charts of any repute but they’ve carved out a niche that they can release on and tour with and be pretty successful with it.