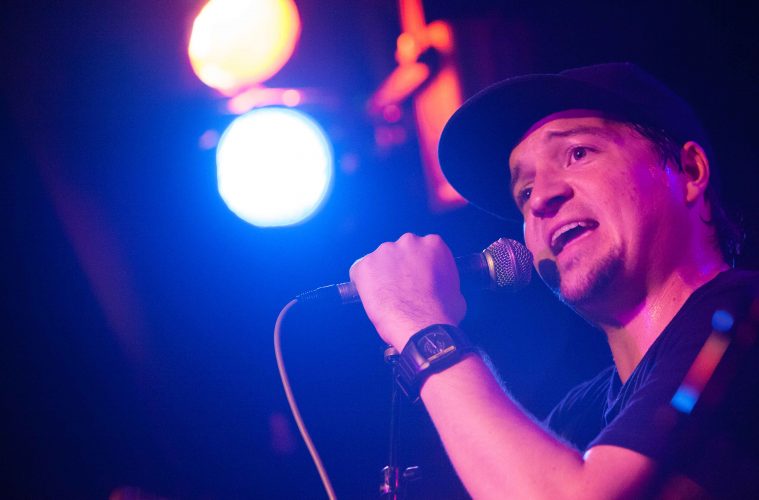 Saturday November 5th was a day on which I explored one-fifth of New York City’s densely populated concrete jungle, specifically the island of Manhattan. This wasn’t my first trip to the Big Apple by a longshot, but it was unique in that it was my first time I went there by myself. Having a near-pathological independent streak frees you up to do what you want, when you want, how you want without being tethered to the needs and wants of a companion or a group. I’m not saying that traveling with either is a bad thing, but I am saying that such travel only works for me in very small doses. That morning and afternoon was spent exploring most of Time Square. But that night was when I reached my visit’s apex: DROM.

Located in the Lower East Side of Manhattan, it almost felt like a speakeasy bar considering the dark concrete stairs one descends to reach its darkly lit basement location. Dubbed by the Wall Street Journal as “New York’s premiere venue for world music”, DROM is as much that as it is a restaurant, a lounge and a bar. There was a bohemian feel, and it proved to be that after 7pm when the place became packed with more than 40 people. After around that time is when BRBRCK and the iLL Harmonic took the stage.

The schedule for the venue was the same format as my college alma mater’s annual Spring Weekend concert: A rock act opens before the hip-hop main attraction performs. Singer-songwriter Jason Consolacion (also a member of the iLL Harmonic) and his backing band performed a vibrant set that touched off with a cover of Peter Gabriel’s “Sledgehammer”. After a brief interlude, the iLL Harmonic began to set up until BRBRCK himself came out and took helm of the mic.

Born Michael Berberich, the 33-year-old Brooklyn transplant was sporting a Run the Jewels t-shirt that seemed appropriate in a polar way. For what he and his hip-hop band lacked in aggression in the performance, they more than made up for it with their collective energy. With this being a record release party/performance for his full-length sophomore album “Backstage”, the set list was comprised of high-energy songs from said album. They started off with the upbeat “Boom Bap” and then, after some humorously shameless plugs for the merchandise table, went into the more wistful and jazzy “Champagne Hangover”.

The iLL Harmonic gave off a more organic sound live than they do on “Backstage”. The band is comprised of the aforementioned Jason Consolacion, along with Amanda Kay Schill, Ryan Dinger, Aaron Butler, Anthony Dunn, Andrew Friedman, and Lauren Crump. Before the gentrification-attacking “BrunchDrunk, New Brooklyn”, BRBRCK gave a seemingly ad-libbed faux-theater monologue. I say “seemingly ad-libbed” because of how band singer Amanda Kay Schill weirdly glanced and responded to him as he did it, as though she wasn’t expecting it. But they later revealed that it was all part of the show. On the mic, BRBRCK feeds off of the live sounds of his band with boundless energy in both motion and as a rhymesayer. Going out strong with the hook and guitar-driven “Waiting for the Sun” was a good choice. Being in DROM was the right spot for live D.I.Y. hip-hop acts like BRBRCK and the iLL harmonic to have maximum expression.