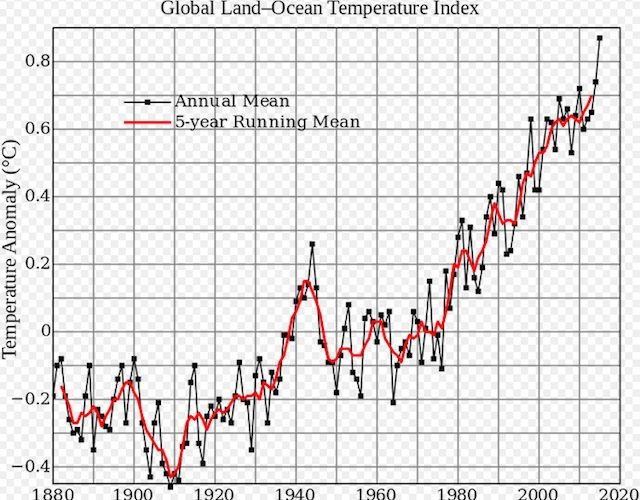 Global Warming Isn’t What You Think It Is

Every year around this time when the daily high temperature drops below the freezing point for water (32 degrees to most of the United States, 0 degrees elsewhere in Celsius) I have to hear some joker quip “Well so much for global warming!” Aside from not being that funny (who wants to hear that s#%t when you’re already wearing multiple layers of clothing just to go outside) it reflects a general lack of scientific understanding that ticks me off. The joke implies that if “global warming” was a real phenomenon, it wouldn’t be so cold in the winter. These same people will joke that if a summer day is unusually cool and comfortable that “global warming” didn’t make us all hot and miserable – and it’s equally as devoid of both humor and fact then too.

I’m not a meteorologist, nor a climatologist, and I do not profess to know more than the actual people who make studying the weather or our global temperature their living. What I DO know is that “global warming” has absolutely nothing to do with an unusually cold winter or an unusually mild summer. The problem is a lack of perspective on the part of the observer, or to put it another way, the variance in temperature for YOU personally is absolutely statistically insignificant. If you’re having a miserable day in July where it’s so hot outside you can fry an egg on the sidewalk, and/or the local news says it’s the hottest day on record, both of those things have nothing to do the average global temperature worldwide for one day, and even THAT one day measured worldwide would STILL be insignificant.

“Global warming” actually measures long term trends for our planet Earth as a whole, which means a whole lot more than whether or not your electric bill goes up in the summer or your heating bill goes up in the winter. You can personally feel the difference between 80 degrees and 100 where you live, but you can’t feel the difference if the entire Earth goes up a tenth of a degree – SHORT TERM. Where global warming should actually be a source of concern for people, and not trivialized in jokes about the current weather outside, is the long term implications of pollution being trapped in our atmosphere, which in turn traps more of our sun’s energy instead of radiating it back out into space, the so called “greenhouse effect.” If you let the ice in your cup melt to room temperature you have more water in your glass than you did before, and if we let enough pollution into the air to trap more solar radiation on the surface, we are doing the same thing to the polar ice caps.

If you don’t think that much ice melting makes a difference then I hope you don’t live in any state or country with a large coastline. Those water levels aren’t going to go back down folks. An Earth whose resources are already strained to the brink by a population of over seven billion is suddenly going to have to find where to resettle a couple of billion when those coastal cities disappear under the rising tide. That’s not going to be pleasant, and it’s only going to cause more scarcity of resources, not less. What happens when resources aren’t abundant but human populations are? Wars happen. It’s the natural consequence of needing more than you have – you want to take it from those who seem to have more than they need. This is writ across history for century after century, and these people weren’t dealing with global warming at all – just a lack of technology to produce a surplus of food. Increasing population and decreasing land mass means there just won’t be enough resources for everyone.

I realize that something you can’t feel, can’t see, and can’t personally attest to changing your life on a daily basis seems insignificant enough to make jokes about it. In fact it makes it very easy for politicians to deny that climate change exists, because they can appeal to that very human tendency to dismiss that which you can’t observe in your own life. Furthermore politicians will tell you it’s a lie because accepting the truth of the knowledge gained over the years by the meteorologists and climatologists who have studied long term trends means CHANGE. If you can be shown that human beings generate more carbon emissions through burning fossil fuels, it means we either have to change the way we produce energy, or reduce how much energy we consume. Who wants to do either? It’s easier to deny global warming is real and make jokes than deal with the awful reality you might be part of the problem. Individually one person driving one car isn’t the problem, but billions of people consuming the same fuels that produce the emissions that turn our Earth into one giant greenhouse is. It may not matter to you if the Earth as a whole gets a tenth of a degree warmer this year or next, but once those ice caps melt and Los Angeles is under the Pacific Ocean, maybe we can all stop joking – or MAYBE we can do something before it gets that far.