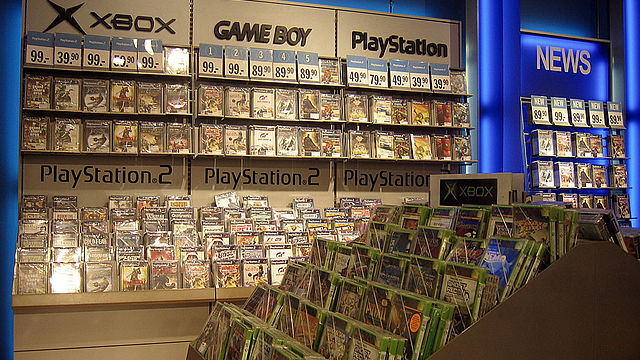 Does Media Still Matter for Games, Music or Movies?

I reached a point a couple of years ago when I lost interest in buying compact discs. At first it was a practical matter, because stores around me stopped selling the cases I had been using to sort and hold my discs, and I had become tired of constantly reshuffling them each time I had a large enough batch only to have my cup runneth over with no place to put the extras. I tried to simplify matters by reorganizing my collection so that artists with multiple albums were separated from those with only one, but this proved to be of little use because very few artists these days are “one and done” if they get signed to a label that cares enough to put out a physical copy.

The digital nature of music encoded onto a compact disc also makes it largely irrelevant to me any more whether I listen to an album via buying the download or buying a hard copy. When artists want to send me a promo copy I actually prefer the digital version because it sounds just the same and it doesn’t take up any storage space. If they sent me a hard copy I’d just wind up ripping it and adding it to my digital library anyway. If I’m going to buy something that takes up space in my home, I’d rather it be a vinyl record where I don’t expect a “perfect” audio experience, but appreciate the vintage sound of needle on vinyl and the oversized artwork of the larger format. It doesn’t hurt that these are sometimes “collector’s edition” releases which may (but this is far from guaranteed) retain their value over time.

As previously mentioned in my Virtual Console editorial though, I have acquired hard copies of a great many video games over the years, and even when I have digital editions of them to play I still keep the hard copies out of sentimentality and a “collect ’em all” mentality. I haven’t gotten rid of any of the compact discs I’ve ripped either. Maybe I just like always having a hard format backup, or maybe I just don’t trust digital versions to not fail at some point, but I have noticed that with each new generation of consoles I buy fewer hard copies of games. I make some exceptions for titles from Limited Run Games and the like, but the convenience of a digital purchase is hard to ignore when you want to play something new right now. Even though Nintendo hasn’t done the best job of making their purchases transferable, Sony has made it relatively easy to buy a console and (where compatible) re-access your own downloads. It gives me some degree of confidence that my purchases are “in the cloud” and always there if something happens. There’s no such cloud for retro games so we need the physical media.

Still though I wind up thinking the Nintendo Switch may be the death knell of my desire to own hard copies of games. Since the system doubles as both a portable handheld experience and a console wired to your TV, having electronic purchases makes more sense than physical copies, and the physical copies don’t really come with much that makes them special anyway. An empty plastic box comes with one chip inside you put in the game card slot. That’s it. No instruction manual, no warranty, nothing collectible or interesting to look at. At least with retro games you had a lot of things to examine inside the box – a game manual, a warranty card, sometimes even a poster. Modern games seem to have completely forgotten these basic necessities, and unless you shell out for a “collector’s edition” you don’t get anything with your game other than the game.

Movies and TV shows may be the lone holdout for me as far as physical media is concerned. A lot of the streaming services like Netflix and Hulu don’t leave your favorites up in perpetuity – they put things up and take things down based on whether or not they have the rights or feel it’s popular enough to keep it available. I found this out the hard way when Monk disappeared from Netflix, but I enjoyed the show enough to buy hard copies of the DVD sets (which were often available cheap). The size of the files makes it impractical to buy and download digital copies which would quickly fill up the entirety of a built in hard drive or external drive. There are also many shows and films which will NEVER be streamed due to them having a cult following which doesn’t justify being picked up by a service like Netflix. A compact disc no longer meets the standard of physical media, video games still do in some limited cases, but as it stands right now concerts, movies, and TV shows still remain the king of hard copies be they DVD or Blu-Ray.