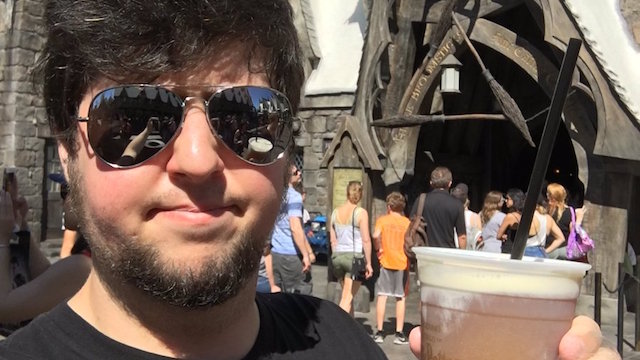 Maybe JonTron has spent a little TOO much time talking to birds.

For those who haven’t heard of him, YouTube comedian Jon Jafari b/k/a JonTron first made his way to fame in the early 2010’s through his reviews of video games ranging from the truly memorable to the hilariously awful (and often both at the same time). This led to him forming a “Let’s Play” video game channel with Arin “Egoraptor” Hanson called Game Grumps, a channel he would later leave behind to concentrate more on his own brand. Later JonTron videos were more infrequent but of a higher production quality comparable to modern TV shows, with his unique brand of humor still in tact, and a partnership deal with Maker Studios that gave him the ability to take on new projects like movie reviews and a Star Wars themed game series called “Starcade.” With over three million subscribers and a pet bird named Jacques, JonTron was “the man” and a lot of upcoming YouTube content creators blatantly copied his irreverent style in trying to cultivate their own audience and achieve his success.

All this could have gone on business as usual had JonTron not been turning the volume up on some uncomfortably disturbing rhetoric the last few months. This first came on my radar as a suggested video called JonTron on SJWs back in January. I had never heard of Sargon before and knew nothing about his views, so some of what I heard in this interview caught me by surprise. Jon actually sounded somewhat reluctant to talk about politics and suspected his fans might not agree with his views — talk about foreshadowing. As they discussed “social justice warriors” and the “regressive left” I found myself wondering over and over again “What exactly is Jon trying to do here?” Nothing he said back then struck me as SUPER offensive, but it left me feeling generally uncomfortable. Nevertheless just because somebody is a YouTube funnyman doesn’t mean they aren’t entitled to a political opinion, and freedom of speech in the United States gives our right to express those views, so I let it go and continued on my way despite some of my concerns.

Unfortunately JonTron turned the volume up when he tweeted about U.S. Congressman Steve King and added his own two cents in support of King’s anti-immigration views.

Wow, how scandalous, Steve King doesn't want his country invaded by people who have contempt for his culture and people! NAZI!!!

The obvious hypocrisy of Jafari being the son of immigrants (he is Hungarian-Croatian & Iranian) was not lost on me or many of his fans. Putting aside the fact that either Jafari or King would be the arbiter of what “culture” is in the United States, and presumably deciding that means America’s borders should be closed (even to people like his parents), this still could have gone largely unnoticed as Twitter twaddle had he not decided to double down and discuss these views with a streamer called Destiny. The full audio if you’re interested is two hours long but let me give you a brief summary of Jon’s most disturbing (and completely unsubstantiated) talking points.

1.) Colonization was positive for the African continent on the whole.
2.) Wealthy black men are more likely to commit crimes than wealthy white men.
3.) Immigrants would reclaim portions of the U.S. ceded by Mexico in the 19th century.
4.) “Nobody wants to become a minority in their own country.” *
5.) White people are going through a “demographic displacement” in the U.S.

* Maybe he should talk to some indigenous Americans about that one.

After going silent for nearly a week on Twitter regarding the uproar his comments caused, JonTron released a statement responding to the controversy. Again in a free country and a Democratic society he’s entitled to espouse any opinion he wants, right or wrong, but that same freedom also allows other people (who he may consider the “regressive left” and “SJWs” he put on blast in January) to call him out for sounding like a storm trooper for alt-right racism. His statement was hardly apologetic. He blames his inability to articulate his points to the fact he decided to enter a spontaneous debate, and thinks the problem is that people hyphenate their ethnicity (Asian-American, African-American) instead of just all treating each other as fellow Americans. Jon, that’s a little easier to do in a society where the sons and daughters of people who have lived here for three generations aren’t being yelled at by the alt-right to “go back to their country” because they don’t happen to look as white as you do. That’s a little easier to do when you don’t have to worry about being shot on your way out of the mosque where you worship your religion, and that’s another freedom enshrined in this country – the right to any form of worship you choose without government interference.

Mr. Jafari seems to believe we live in some sort of post-racism United States when the events of the last five decades clearly show we’re nowhere close to that, and on a global scale there’s no evidence of a post-racist society either. We haven’t even begun to catch up on the effects of hundreds of years of slavery before the civil war, nor the Jim Crow laws that followed, nor the ghettos created by “white flight” from urban areas to suburban ones. You can’t live in a post-racist society when not everybody is treated equally regardless of race, religion or gender and we’re not even close to that. I may not be a “social justice warrior” but I know that denying racism exists doesn’t make it go away, nor does arguing that white people are suddenly a homogeneous body of people with the same views who are the new oppressed minority. I think the election of 2016 itself proves that white people come nowhere close to agreeing with each other let alone having a unified political view.

One thing seems to come up over and over again in Jon’s debates – that “white bashing” proves his point that whites are the whipping post for everything wrong in America even though it’s not their fault. As someone who passes for white and seems to identify as such I’m sure he doesn’t want to bear the burden of history any more than anybody else who looks that way or receives accidental white privilege they didn’t ask for. Unfortunately we can’t shed history so easily nor should we try. Have you heard the saying those who ignore history are doomed to repeat it? Does it feel like the drumbeat of the alt-right who say we “can’t rebuild our culture with somebody else’s babies” who want to “build a wall between the U.S. and Mexico and make Mexico pay for it” and who vouch for a “Muslim ban” because they are “bad dudes” are forgetting history? It’s either that or they are blind to just how racist they really are. 98% of the U.S. is immigrants and yet JonTron would have us believe immigration is the problem with America and ending/controlling it would cure us. JonTron would never have been born here (nor Donald Trump) if the borders were closed so I hope the next time he makes a YouTube video he considers how blessed he is to live in a country where he’s free to say any stupid thing he wants — funny or not.

Next time Jon please do your homework and don’t say ridiculous s–t like wealthy black men commit more crimes than wealthy white men. Even if you’re trying to make a point and can find some Breitbart source for that kind of “fake news” it doesn’t make your talking points any more palatable – it just makes you a racist dick – and it makes me one less subscriber to your channel.