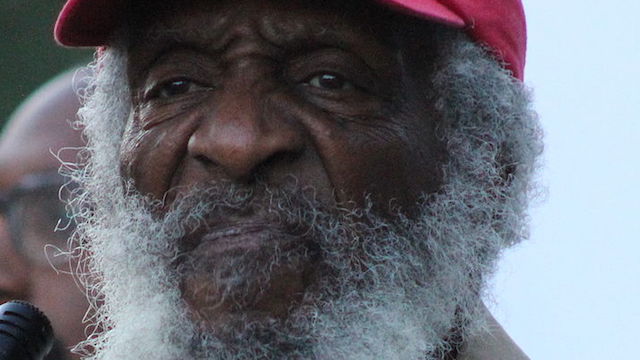 I don’t know that any one bio, obituary or editorial can do justice to the life and times of the man born Richard Claxton Gregory on October 12, 1932. That won’t stop me from trying to shed a little more light on an important figure in American history – known as well for his humor as for his activism – just a few days after his passing on August 19, 2017 at the age of 84. It is sad to note that Dick Gregory passed away at a time when civil rights is going in reverse in the United States at a time when we need his voice more than ever, but perhaps in remembering this icon we can also shed some light on the truths he spoke about and use them in these troubled times.

Dick Gregory’s early life in St. Louis seemed to put him on a path to success in any number of fields. He found success as both a student and an athlete at Sumner High School, and his endeavors in track and field earned him a scholarship to Southern Illinois University. This abruptly ended when Gregory was drafted into military service in 1954, and it was during his time in the armed forces that he developed and refined his skills as a comedian, winning talent shows performed in front of the troops. He was discharged in 1956 but by then had lost his interest in the collegiate system and was disillusioned by what SIU expected of him as a person: “(They) didn’t want me to study, they wanted me to run.” That chapter of his life closed but a much broader one was just about to open.

Gregory moved to Chicago to further a career in stand-up comedy, working by day as a carrier for the postal service, working by night perfecting a brand of humor that it’s not hard to argue informed the careers of Richard Pryor, Chris Rock and Hannibal Buress among many others. A now legendary tale states that Playboy impresario Hugh Hefner caught his act at the Roberts Show Bar in 1961. Even though the counter-cultural movements of the 1960’s were not yet in full swing, and the Civil Rights Act was still three years away, there was little doubt Gregory was both mocking racism while simultaneously speaking about how pervasive it was in the South. He joked about how a restaurant was going to refuse him service for being black: “These three white boys came up to me and said, ‘Boy, we’re giving you fair warning. Anything you do to that chicken, we’re gonna do to you.’ So I put down my knife and fork, I picked up that chicken and I kissed it. Then I said, “Line up, boys!” Even late in his life, Gregory’s unapologetic humor was still as cutting and sharp as it was in the 60’s.

You’ll notice I mentioned the Civil Rights Act of 1964 earlier, and that’s because Gregory used his cutting wit to do more than just make audiences laugh. He was a key figure in the Civil Rights Movement of the era, using his platform in places like Selma, Alabama to encourage voter registration and to fight against racist attempts to suppress the black vote (something which sadly we are seeing again in modern times). He also took direct action by running for office against those who were against civil rights and justice for black men and women in a racist society. He ran against Richard Daley in Chicago for Mayor in 1967. He ran for President in 1968 as a write-in candidate and received 48,000 votes, a testament to both his popularity and perhaps to the dissatisfaction with the three leading candidates of the day: Republican Richard Nixon (who won), Democrat Hubert Humphrey, and independent segregationist George Wallace. Gregory’s campaign put him on Nixon’s “enemies” list.

As Gregory often decried the dishonesty of America throughout a life of political activism, so too would we be dishonest if we didn’t point out that Gregory also had some controversial beliefs over the years. He disputed the findings of the Warren Commission that Lee Harvey Oswald assassinated President John F. Kennedy, believed the moon landings were faked and that 9/11 was a conspiracy covered up by the government. I admire Gregory’s life-long commitment to standing up for the disenfranchised and oppressed, and there’s no doubt his comedy was a powerful weapon against racism, but his hunger strike in pursuit of “the truth” about September 11th was a disappointment to me. It doesn’t diminish the greatness of the man as a whole, it’s just a regrettable footnote to a lifelong career of meritorious public service protesting injustice and inequality in America.

To end up an upbeat note, he was faithfully married to his spouse Lillian Smith from 1959 until his death, and they had 11 children together. One (Richard Jr.) died at only two months old, but the rest (Michele, Lynne, Pamela, Paula, Stephanie, Gregory, Christian, Miss, Ayanna and Yohance) can proudly carry on his legacy of activism and know that their dad believed in making a difference in the world. He wrote a best selling autobiography that used the ‘N’ word as its title long before Nas was forced to change his album title when he attempted to do the same. Gregory was a man ahead of his time, and not one that I agreed with in all things, but one who I respected because he spoke in an uncompromising voice for what he believed until his dying day.