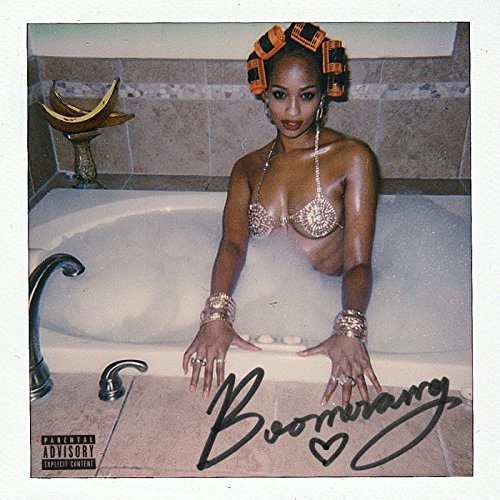 Just a couple of months ago I wrote my first review of rising musical star Jidenna, an artist who fluidly transitions from rapping to singing and back again. He seems to be this decade’s version of Wyclef Jean in terms of his musical vision and worldbeat crossover appeal, and the unexpected surprise “Boomerang” album continues that trend with a couple of remixes and some hot new songs including the booming J-Kits produced opener “Decibels.”

“She ready for the weekend, goin Mozambican
Black passports, we ain’t takin meetings
Don’t gotta lotta life, for a lotta words
And when they call her b—- that’s when I’m proud of hers
Chiefy, chiefy, chiefer, now I vape my reefer
That s–t be too loud, s–t could blow a speaker
Chiefy, chiefy, chiefer, that’s my queen of shisha
She my Smokahontas, but they just see a diva”

“The Chief” changes it up to a more Carribean feel and flow with a little help from Diplo for the “Boomerang” title track and a music video that will inspire copycat dance moves. It’s likely to replace current favorites like “Little Bit More” and “The Let Out” in rotation on the airwaves and at whatever dancehall or club you frequent.

Even though “Bambi” was not an official single from “Long Live the Chief” and was technically a promotional vehicle for the album, Jidenna’s pseudo AutoTune croon and playful metaphors about lions and jungles definitely caught my ear. Nothing about the Nate “Rocket” Wonder, Nana Kwabena, Horowitz and Jidenna produced original has changed on the sequel “Bambi Too” other than the guest stars — Sarkodie, Maleek Berry and Quavo.

Speaking of “Little Bit More” though, the album updates the stomping Afro-pop original from Roman GianArthur, Nana Kwabena and Mark Williams with a remix that brings in Burna Boy. As with the new take on “Bambi” nothing is different about the song musically, but the line-up for the other song gives it more of a new feel. This one comes across like taking an established hit, adding one cameo and sticking it on “Boomerang” to pad out the album.

The album peaks with the heavy booming bass bottom of “Out of Body” featuring Dot Cromwell, Wale, and a very angry woman who thinks she’s being played by Jidenna and doesn’t want to put up with him any more. It feels like a leftover from “Long Live the Chief,” and that’s a good thing, but then again most of “Boomerang” feels that way and that might NOT be such a good thing. While Jidenna seemed innovative and trendsetting before, he feels comfortable and established here, revisiting old hits and putting a new spin on a formula that already works for him. It’s still a good effort but it’s not that next level I’m still hoping that Jidenna will take it to.