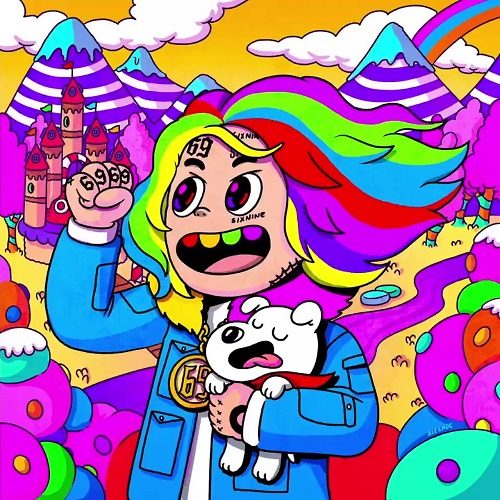 One of science fiction’s basic conflicts is that it tries to imagine the future with today’s means. How many club scenes set in the near or not-so-near future have you seen on the silver or the small screen that were soundtracked by tunes that sounded suspiciously like contemporary dance music? If the budget allows for it, someone may come up with a stereotypically futuristic variation of what the kids are listening to, if not, they just insert a current hit – or any song that some parent company or involved agency would like to see turn into one. Art direction has potentially the same problem, but it generally masters the challenge better, often being part of the splendid visionary package that the screen adaptation of science fiction is absolutely able to present.

What’s this got to do with rap? Maybe this: As I look across the rap landscape today, I cannot help but feel alienated by some of the characters that pop up and rapidly become inescapable even to people like me who use the internet conservatively as a source of information. 6ix9ine is such a bird. I had already a bad image of the guy before I had heard a single one of his songs as unsavory legal troubles that surfaced colored his flamboyant appearance in a peculiarly negative light, only reinforcing my impression that these newly emerging rap stars must be part of a particularly dystopian future. As it turns out, and as is the case for too many of these rappers who appear to foreshadow the future of rap, 6ix9ine’s music is anything but futuristic, let alone forward-thinking.

His distinction in today’s market is that he raps with an aggressive bark and doesn’t mumble his words. That’s cool and everything, but if you have to come across to me like a reincarnation of Sticky Fingaz, don’t end up disappointing me as a product of too many replication errors, to the point where I can only call you Sticky Fingaz without the mind and soul – actually without any mind and soul whatsoever.

Oh who is Sticky Fingaz, you ask? Just the guy who created one of rap’s most accomplished concept albums (“Black Trash: The Autobiography of Kirk Jones“) and conceived a massively underrated rap musical (‘A Day in the Life’). But he was also the dude who exclaimed with his Onyx brethren at the top of his lungs, “LET THE BOYS BE BOYS!” And that’s probably where history can come to the defense of one Tekashi69. In terms of its broadest lyrical outlines and the energy it packs, “Day69” is very 1993 (going into 1994) – “Bacdafucup,” “Enta Da Stage,” “To the Death,” – depending on how you look at it, fratricidal rap committed by young men or a lost generation lashing out in blind rage.

There’s a track called “93” on Tekashi69’s first full-length, and it’s not a reference to an era that might have some bearing on his music but some gang signifying. As mentioned, regarding content there’s nothing new to be found, and what’s particularly lamentable is the shocking lack of variation. He’s basically killing – or just about to kill – ‘niggas’ in every song. If you had to assess the character portrayed, you’d come to the conclusion that the streets bred another monster. The rapper’s creative skills certainly don’t lie in songwriting (it’s doubtful he’ll ever be able to come up with song titles with more than two syllables), his strength lies in channeling the (destructive, so be it) energy into a precise flow. As mindnumbing as the listening experience is, 6ix9ine does not proceed recklessly in regards to the tracks he raps to. He and/or his producers finesse their sonic assault with a sense of musical momentum. Beats and raps are not on a collision course, they are combined forces and hit accordingly hard.

Ironically, the actual music found on “Day69” is what helps me settle in. If I were to judge the book by its cover, my instant reaction would be, ‘Get this WorldStarHipHop-meets-cosplay clown out of my f***ing face!’ With his ‘break stuff’ attitude he fulfills a purpose, even if it’s only quenching the audience’s thirst for testosterone. Perhaps this is simply something the young man had to get out of his system. His most recent hit single, trash rap extravaganza “Fefe” with Nicki Minaj (not included here, “Day69” having originally been released in February), already fully exploits his pop potential, and the major assists from artists like Tory Lanez and Young Thug (“Rondo”), Fetty Wap and A Boogie Wit Da Hoodie (“Keke”) and Quavo (“Gummo (Remix)”) indicate that 69’s team early on intended to take his show to bigger stages.

“Day69,” taken for itself, casts 69 as the rap equivalent of those dubious YouTube Kids channels that abuse familiar characters from children’s entertainment to shock young viewers on a massive scale through what critic James Bridle calls ‘industrialised nightmare production.’ For some adult listeners 6ix9ine is already a nightmare with or without sinister plots. Cartoonishly violent rap is nothing new. But this is starting to feel like so-called ‘trolling culture’ has reached rap music (in literal and physical form), and since the behavior is so normal nowadays, these kids aren’t even aware of what they’re doing. Perhaps that’s ultimately a good thing, nobody knowing where this is going. Just when you got 6ix9ine firmly pinned down as Lil Yachty’s evil twin, “Graduation Day” bonus track “Gotti” sees him plea in a kiddie-slash-Caribbean tone, “I pray to God that my niggas gon’ eat / I pray to God that my family gon’ see / Prayin’ that the Lord take a chance with me.” What do clerics say when there is nothing more to say? Let us pray.