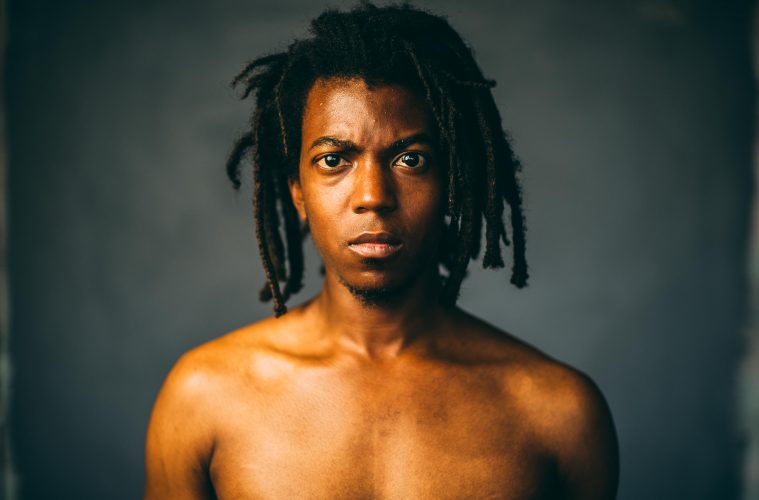 What is your mindset when you go on stage to perform songs from “Bad Actress?”

“I like performing the new songs because they speak to my current state of life.”

Some of the singles on the album have already been out – was there a set start and end date to the project, considering it was your first LP?

“We were still working on the visuals, so we thought that in order to buy time we would release singles leading up to the full-length. Ideally we wanted to release the visual EP and it would be the first time anybody would hear it, but the visuals just took a while.

I thought it would be a shorter EP at first, but it was quickly shaping up to be an album after five or six songs. After the sixth or seventh song we realized it was going to be an LP. Ant is a great producer and I admire him, I’ve always admired him. It worked really well. He’d play a beat and I’d come up with a hook, chorus. We got excited and dove in. The songwriting process happened mid-2016, I wrote on the road… We kind of got the feeling that this album was about relationships, it’s a love album, a self-discovery.”

You’ve always played around with genre, but this album is a lot more vocal heavy. Some may even call it a punk album. Would you call this a rap album with heavy rock influence, or a rock album with some rapping?

“It’s blues, rock, soul, and some country. With hip-hop. Which is great. I think it’s so cool, sonically I love Ant’s production. Those songs came out of that. Let’s not forget the roots of hip-hop. We started blues and rock and roll and soul. It was really refreshing to hear Ant’s production and I felt like I was just channeling these old songs

A lot of the themes are about partying, that moment when you feel the most alone in a crowded room. People really relate to that. When did you notice these things about yourself, and how did that come to be on the album?

It just spoke to what I was going through. I was just in a cycle, a loop of getting on with the wrong women, and the partying was an escape from dealing with my shit. Dealing with what I got to do in my life. It became like a crutch, a habit. I realized how much time was spent in the clubs and the bars and these kinds of places. It started feeling like a hell. Going to the same places, everybody knows your name and you’re welcome, you feel somebody special, and I’m the life of the party. Bad Loves Company. The company I kept wasn’t holding me accountable. I felt drained in this company, I didn’t feel like I was being fulfilled, or being fed. It was just party, party, drinking, drugs, just escape. It was just days. Days of partying. I remember 2016 I was in a particular relationship and all we did was party. Wake up, party, sleep, party some more, have sex. That was my existence. The songs on this album are a reflection of this period of time. Things just kind of came to a head – it was my mother, it was my manager. They were like, where’s the music, what’s going on, where are you spending your time, where are you spending your energy. But it was ultimately me who woke me up. I realized that the relationship I was in wasn’t going anywhere, so I stepped. It was hard, because it was a siren that kind of called me back. It just had to stop.”

“It influenced me in many ways. I believe in being naked and transparent in art. You can lie to yourself, but when I make songs I do not lie and I do my best to be vulnerable and expose myself. Being let down by your father is jarring and traumatizing, and “Let Down” is a story about coming home to my parents fighting every night. There was one particular night where my mom and my dad were fighting upstairs when I was four years old, and I walked up in the hallway and it smelled like mustard and hot sauce because my dad was crazy and drenched my moms clothes in mustard and hot sauce and ruined them. It just so happened that the Fugees were playing on repeat, and it drowned out the fighting. I remember thinking then, “I want to make a song about this moment, make a song about what I went through.” I’ve had the song in my head for years.

Another theme in the album seems to be the loss of a love. What was the relationship like that inspired this, or was it a series of relationships?

The album is named “Bad Actress.” Why the gender?

What is the story you want listeners to take away from the album?

“I wrote the songs, first of all, for myself, but if I had to answer that, I hope that they see that the overarching theme is like a journey through hell. You start with “Tomorrow Party” and you end with “Gotta Get Ova.” You’re going through the most: addiction, abuse, toxic relationships, and you get out of that black hole, you get over it. That’s what I hope people take away: my empathy and understanding for how this works, and how life can be toxic, but you can get over it. You can get out of this.”

Why did you want to do a visual album?

“It tied into the theme of Bad Actress, and I’ve always been a fan of film. It was directed by Dave Wilson, we traveled around the South and shot 5 music videos and tried to tie it together somehow. It illustrates somebody holding you down, you losing your way, and you finding your way back to them again. I just wanted to do something different. I didn’t want to do something cliche, I wanted to make this an experience. The worry was that it would be hard to swallow for some, since it’s so long, almost half an hour. I think it perfectly encapsulates the album- in a shortened version, there’s the album.”

What were some of your inspirations?

“The songs that Ant produced really reminded me of the American South, it has a very old Western feel to it. Soulful, bluesy Alabama sounds. Music Man sounds like you’re in a parlor, old western town by yourself. That’s what inspired the sound. We started shooting in Alabama, then we went to Texas, New Mexico, Arizona, California, New Orleans. It was always my intention- when I made gratitude, I just knew that this song has to be translated over film. It was the bullshit that my ancestors had to go through, and that we were all going through. I’m an avid reader of history,… we think we’re so ahead, we think we’re so advanced, but we’re not. As a nation, we are not. These things still happen. Police brutality, killings. People writing “nigger” on somebody’s garage door. There’s this story I have where I was in this party in high school, and I introduced myself to a white girl and she said to my face, “I don’t shake hands with niggers.” I just stood there frozen, gritted my teeth.”

I heard you want to continue exploring genre and maybe even start a band. What’s your next direction musically?

“I don’t know. I do think that rock is going to be at the crux of what I do. I gravitate towards it, naturally. It’s effortless for me, whereas I’m not the best rapper. I love hip hop, but as for now I really gravitate towards rock n roll and screaming and distorting my voice and body. I love to do that. My next album will sound completely different, I already know that for a fact. It’s going to be weird. I want to explore more ambient sounds, or maybe some reggae undertones. I love the beach boys, I love Nirvana, I love Jimi Hendrix, I love The Jesus and Mary Chain. Maybe this one will be more punk.”

Special thanks to DEEN Studios for the attached publicity photo.