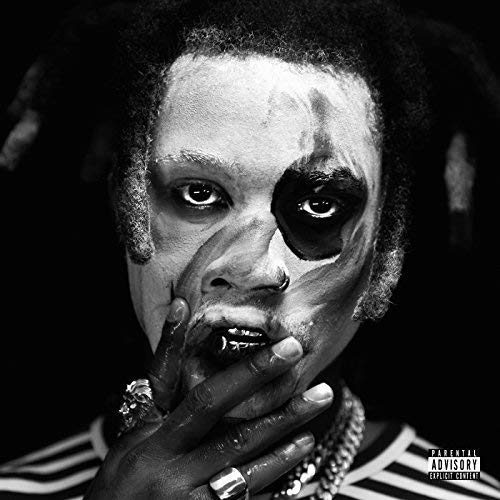 When asked about the video for his song “Clout Cobain”, a devious carnival-esque visual, Florida rapper Denzel Curry recently told Power 106 Los Angeles’ The Cruz Show that the current generation of rappers, one that he is a part of, is “really just a circus to me.” He also called on viewers to interpret the clearly symbolic video for themselves and denied using it to take any direct shots at any of his fellow artists. This dynamic, Curry portraying the new school of rap as ridiculous and circus-like without naming any clear names, is a central theme in his latest album “Ta13oo”. It is certainly not the only topic addressed on the work, however, as Curry delves into a wide array of subject matters touching on everything from wealth and success to molestation and governmental control.

Curry has described this work as having three acts: Light, Gray and Dark. The first act features tracks such as “Black Balloons” and “Sumo” which tend to carry more uptempo sonics in their own ways but in the case of former still carries some rather negative lyrics. For while “Black Balloons” showcases a vibrant, smooth but energetic beat Curry still delivers lines about being “timid and very sad” and the sentiment that life is “overrated”. On the bass-boosted “Sumo” Curry boasts how full his pockets are but also uses the track as a way to convey his more cynical thoughts on the matter with lines like,

“Never gave a fuck about a dollar
Mo’ money mean more problems
Pray for me to fall like Autumn
‘Cause I got it on my own with no help, mane
Got a bag then invested in myself, mane”

“Sumo” ultimately feels more like an aggravated look at the rapper’s contemporaries and their obsession with dollar signs than the flexing session it may seem to be upon first listen.

In the second act of the album, Gray, the listener finds Curry delving into somewhat darker subjects. On “Mad I Got It” he raps about others coming after his life and how, “police never read my rights”. On the chorus of “Clout Cobain” Curry insists that he only wants to live well and do well but others don’t want to see him thrive with the lines, “I just wanna feel myself, you want me to kill myself.” He even states that he can’t trust his friends for fear that they may actually be his foes and asks, “Oh why you wanna take my soul?” This second act is a clear progression into the deep darkness that comes with act three but it also serves to level the project as a bridge between acts one and three. That is not to discount act two in any way, however, as cuts such as “Sirens” and “Switch It Up” as well those tracks already mentioned provide robust material on which to build the album’s themes. Additionally, these tracks do appear to be a commentary on the ‘circus’ Curry referred to in the aforementioned The Cruz Show interview.

Act three, Dark, heads full speed ahead into a deep, menacing space as Curry mocks ‘your favorite rappers’ on “Percs” and even threatens to “make sure they all dead.” Things get particularly grim on “Vengeance” when Curry talks of chopping people up into pieces in the first verse. The second verse of this track finds rapper JPEGMAFIA talking weaponry with lines like, “You know my chopper shy, when it cries, it cries, if you die, you die.” His vocals come off with great strength and serve as a powerful addition to this track. Then, in the third verse, City Morgue rapper ZillaKami brings a feeling of all out terror to the track as he goes grim with lines like, “My presence alone can exterminate masses,” and, “Hands covered in blood and rust.” While this artist’s style is not for everyone and can easily be overdone, the devious and gravelly tone he brings to “Vengeance” is ideal for this hostile track’s third verse. Additionally, the sonics of this track more than compliment these emcee’s lyrics as every last bit of the manic and dangerous beat comes off just as heinous as their words.

“Ta13oo” is a concoction of many ingredients and ideas. Ultimately it does come off as a rebuke of the current clout-based culture surrounding his generation of artists. This does not feel overdone in any way, however. Instead, the bulk of the album feels like a journey through Denzel Curry’s mind, a place where his thoughts are experienced in different shades representing varying levels of mental darkness. Certainly one aspect of these thoughts do represent Curry’s feelings toward his fellow rappers, but it would be a misrepresentation to say that this project is an indictment in its entirety.

This exciting album boasts high-quality characteristics in several categories. Firstly, Curry is a particularly strong lyricist. He rarely misses the mark when it comes to his rhyming and flows and can certainly hold his own in this when it comes to building verses that sync together and play off his competent and often catchy hooks. The production across “Ta13oo” varies in nature according to each of the three acts it supports but is consistently well-done whether it be for a more carefree cut like “Black Balloons” or a darker piece like “Vengeance”.

Regardless the beats on this album surely get the job done and then some when it comes to matching the tone and messages of the progressively darkening lyrics. In the same way, this project’s features, whether they be from Goldlink or JPEGMAFIA, all do their part well and help add to an album that uses features rather sparingly. Denzel Curry’s “Ta13oo” is a high-quality piece of hip-hop artistry that skillfully takes aim at its own contemporaries without coming across as misunderstanding or preachy and with a knack for exhibiting the darker side of life without seeming corny or ill-intentioned.