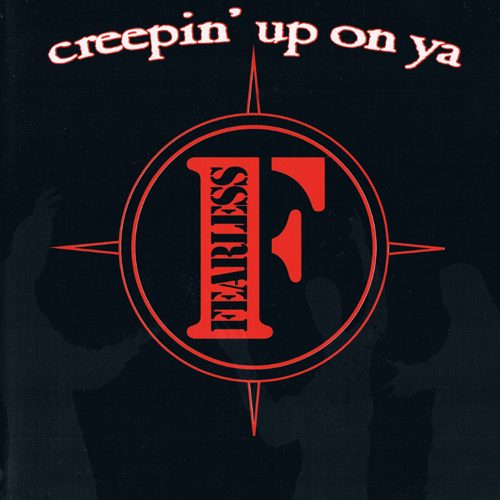 Fearless :: Creepin’ up on Ya

Conventional wisdom has it that when Run-D.M.C. came along in 1983, new school rap was born, and anybody that had come before the Hollis trio was henceforth condemned to wither away in the eternal winter known as old school hip-hop. Fair or not, the clean break meant, at least once the historical turning point had seeped into everybody’s mind a few years later, that the chances of these pre-Run-D.M.C. artists to remain involved in rap music were greatly diminished. A discriminating look at the situation would likely reveal that exactly one pioneer persevered into the new school – Kool Moe Dee.

After a number of groundbreaking artistic developments between the mid-’80s and the early ’90s, and after the charts had been conquered, a longing for simpler times began to take root in rap music, perhaps mixed with a vague notion of a debt being owed to the people without whom none of this would have been possible. This combination of nostalgia and admitted neglect paved the way for a brief old school revival during the mid-’90s. Public Enemy DJ Terminator X took the lead by featuring several respected names on his second solo effort, “Super Bad”. De La Soul were led by the same intentions when they recruited one representative from four iconic groups for their off-album cut “Stix & Stonz.” And the next thing you knew fresh albums by The Treacherous Three and Whodini could be found among the Snoop Doggy Dogg’s and Wu-Tang Clan’s.

The inspiration for these projects, ironically, seemed to have been the last successful Run-D.M.C. album, 1993’s “Down With the King,” which equipped the new school architects with strong connections to the contemporary scene. One can only imagine the consent needed to reactivate MC’s who had probably long given up any professional ambitions, or even, in the case of The Fearless Four, record the first album of their career.

Now simply going by Fearless, they set out to prove that there’s life in the old dog yet, and perhaps even a few new tricks. But how old were they exactly in 1994? The eldest of the group, Peso, was 35, still some ten years younger than some of today’s recording veterans. With the possible exception of the youngest member, DLB, they all were in their early thirties.

The Microphone Wizard DLB was somewhat a driving force when The Fearless Four were the first group signed to a major label, penning their 1983 single for Elektra, “Problems of the World (Today)” (and devising a number of the crew’s routines before that). Coincidence or not, he maintains that role on “Creepin’ up on Ya” as the album’s most frequently credited writer. He shares the actual airtime with The Mighty Mike C and The Great Peso while The Devastating Tito, ironically the F4 representative on the aforementioned De La Soul track from the same year, can only be identified on three tracks. Indeed the reunion took largely place without Tito, likely one of the reasons the group called itself simply Fearless.

Tito is present for the title track. Following an album intro straight out of the Hollywood playbook with kids opening a forbidden box, the foursome appear like ancient warrior spirits let out of the bottle (perhaps a nod to their 1982 debut single “It’s Magic”). Unfortunately they forsake one of the greatest features of old school rap, checking in with your name, so it’s difficult to determine who says what, but the first two verses of “Creepin’ up on Ya” declare war on competition with decidedly militant minded language. The imagery spans from fighting tactics to graphic threats of force. The second half of the song goes easier on the listener, as it’s more on the traditional bragging and swagging side between “Remember back in the day when the 4 was born / 4 crowns were worn and all titles were torn” and “When I hear beats from O.C. and Krazy Eddie / I lose grip, I do trip, but still rrrrock steady”.

The Fearless Four of 1982, lest we forget, also included DJ’s Master O.C. and Krazy Eddie, who going by the liner notes were still part of the crew in 1994, although O.C. Rodriguez, the member with the most continuous career with production gigs extending from the mid-’80s to the mid-’90s, is the one with the actual album credits. He’s assisted by DLB, Scratch God and Forty Duce who help him bring the group up to date musically. They do so moderately, not in terms of the distance between 1994 and 1982, but in terms of trying to sound contemporary and cutting-edge. The album offers all around familiar hip-hop as you would hear it then.

“On the 2-5th” sets the stage for each rapper’s flirting adventures on 125th Street with a super smooth combo of bouncy drums and a leisurely rolling piano. The title track follows the Marley Marl blueprint of thumping lows and jarring highs without treading too closely to the craziness of Cypress Hill. “Let Us Move On” opens in similar fashion but for the verses scales back the shrieks to let the message ring more clearly as the trio gets political. While “Let Us Move On” recalls more rigid Public Enemy and Paris soundscapes from ’91 and ’92, “Uptown” is closer to its year of origin thanks to a sporty bassline, pumping drums and sprinklings of funky stuff. Left to himself, Peso holds the fort on the album’s only solo joint: “I’m dedicated to rap like a Shaolin monk / full of s–t cause I was born with the funk / A uptown brother, wasn’t raised to be a punk”.

In general the music is serviceable. The wrestling rhythm section of “Getcha Thing On” is an offer to ‘catch wreck’ no rapper would turn down in the early ’90s, and guest Shawnette Gibbs holds her own as she spars with DLB. “Chocolate” has absolutely the right consistency, what knocks this “ode to our black women” almost off balance, though, are the ecstatic moans. Ultimately, Fearless were thinking about formulas, in one case, “That’s an Idea”, even turning that very process into a song. Not every group album in rap history feels truly like a collective effort, but “Creepin’ up on Ya” does. Fearless owed it to their legacy as the performers of one of the most iconic songs in said history. That would be “Rockin’ It”, of course. A landmark that is revisited at length at the end of the album. It’s a bit of a bummer that the producers can’t recreate the magic despite their stubborn reinterpretation of the original track (with all due props to the late great Pumpkin). Also, the crew must have been aware that it was a bittersweet triumph that their greatest hit could have been so relevant to their comeback (from “We’re much more better than we were back then” to “Now, even as we play / there’s a new wave of sound going on today”) but remained a blast from the past even as “Past Tense” packed an extra portion of vintage routines. Fearless dropped their future shock in 1982, in 1994 they didn’t produce as much as a ripple.

But while the Fearless reunion did eventually end in an old school bonfire, DLB, Peso and Mike C were largely behaving like the grown ups that they were. Mike would most likely use stronger language – while introducing a bunch of young guns on “Da Buildin'”. DLB would try to convey the album’s more complex lyrical concepts – while taking a dig at tongue-twisting rapping du jour with “They trip over words, I find it absurd because mine roll”. Peso would spread feelgood vibes and draft multisyllable rhymes – while also, in what might be a rare autobiographical moment, admitting to a past of drug abuse, imprisonment and absentee fatherhood on “Let Us Move On”. The willingness to prove they can still hang is evident, but what’s remarkable, especially a quarter of a century later, is that the pride and joy of being an MC comes across on practically every track.

The song that makes this passion specific is called “Heart & Soul”. Where too much of the argument that “rap is from the soul” is made by singing voices, yet especially Mike and Peso drive the point home in their verses, the former quipping, “It didn’t start from a chart, real rappin’ is an art”, while the latter stands up for rap geeks young and old:

“I sit down and write my rhymes every other day
Friends and family say it shouldn’t be that way
But to this art I have a total devotion
And my love for rap is as deep as the ocean
It’s the way I like to express myself
to uplift myself and to be myself
Cause hip-hop is all in my blood
Everytime I hear it, I get a buzz
I’m a fan of a lot of hip-hop artists
KRS-One, Snoop Dogg and Onyx
Just to mention a few, the old, the new
And it’s a feeling that I feel down low
from the heart and the soul”

The Fearless Four were a second generation rap group, direct descendants, so to speak, of Harlem’s Treacherous Three. The lineup immortalized on “Rockin’ It” didn’t solidify until their first recordings in 1982. So their actual time in the spotlight before new school rap broke loose was brief. Nonetheless, they did put out more singles than just “Rockin’ It”, making various efforts during the remaining years of the decade to keep a hold of a career that had begun so promisingly. But in the end they didn’t have much material to show for, collectively and individually. And even “Creepin’ up on Ya” was snakebitten, beginning with Tito’s limited availability (after all the group’s nucleus together with Master O.C.) and ending with a messed up release situation that seemingly didn’t produce as much as a press photo of the crew and very limited pressings of the album. Nevertheless, in the year of “Illmatic” Fearless accomplished a heroic feat that was never properly honored by hip-hop itself.

Fearless :: Creepin' up on Ya
6Overall Score
Music6
Lyrics6