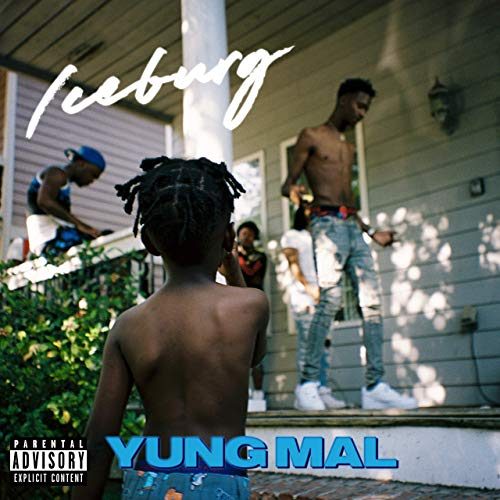 “Ain’t talking ’bout money, then get out my face”

So states Yung Mal on the single “Toothpaste” from his album “Iceburg”. Previously known as one half of the duo Yung Mal & Lil Quill, the 1017 Eskimo rappers (a Gucci Mane imprint) are taking advantage of their increasing profile to drop solo efforts, though it’s clear from tracks like “Cold Shoulder” that there’s no beef or animosity among the team. Collaborating is still natural for these Atlanta artists.

And as you might expect from being affiliated with Radric Davis, a Gucci Mane cameo is mandatory on “Fresh” but not unwelcome. I’ve been hard on Gucci in the past, but either because he’s not having to carry the entire song’s weight or because he’s simply gotten better over the years, his baseball gun-play raps on this song feel effective — simple, but effective.

“Posing for pictures with the strippers and the pie flippers
I’d rather lie to you baby than to lie with you
I seen you with it, s**t, I ain’t finna ride with you
Pitching underhand, I’m a knuckleball pitcher
You’re off base, I call you out, I’m the hind catcher
You ran off, guess you thought it’d be a cake walk
Stealing base, got caught, let the K talk”

That’s far from the only cameo on “Iceburg”. Turbo The Great produces the syrupy and catchy “War” featuring Gunna, and I’m reasonably sure that Pi’erre Bourne produces “Action”, but he also cameos on the song along with Lil Gotit. Other than “Toothpaste” this is the song most synonymous with “Iceburg” and with good reason — it’s got a heavy bass THWOMP that makes it easy to crank up with the windows down rolling around town.

A lot of the appeal of Yung Mal’s solo effort IS in the production. The ethereally floating “7 Day Notice” is a solid rap about struggling through hard times and evictions to come up, but he could have just been spitting “ya ya ya ya” over it like Lil Uzi Vert and it would’ve still been dope. “Harder Than Hard” may not be an original sentiment and “my diamonds shine in the dark” may not be creative when it comes to conspicuous consumption, but this s**t bangs in the whip. “Cross Like Cris”? Same deal.

I’m honestly more ambivalent about handing Atlantian accolades to “Iceburg” than I should be or need to be. I’ve said it before about Migos and it applies here as well — you don’t always need to be a wordsmith to be a good artist. I’m not saying Yung Mal elevates the game to a new level with this album, but he certainly doesn’t drag it down into banality and mediocrity either. The bars tend to hit at about an average level with a focus on swag, a tinge of misogyny and a preoccupation with machismo. I can’t imagine this album being appreciated by someone who calls themselves “woke” but that’s not who it’s for or what it’s about. This is some boom it in ya, boom it in ya, boom it in ya trunk music and for what it’s worth Yung Mal does it as well as anybody else doing it.