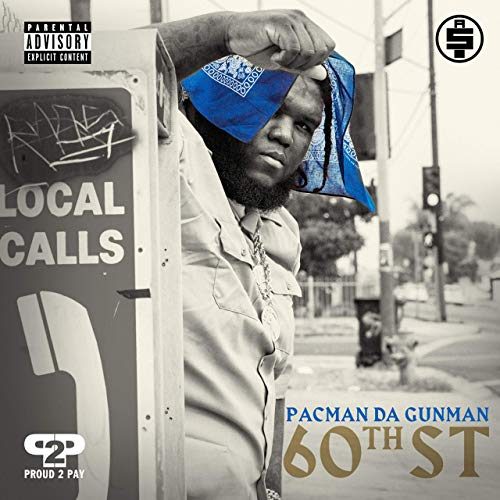 Pacman da Gunman is signed to the late Nipsey Hussle’s imprint All Money In (No Money Out). PDG references this on the track “Don’t Speak About It” from his new album “60th St” when he says “Ain’t hard, to see/my brother, smiling, down, on me/You know I learned from the great, capital S on his face/I’m talking All Money business and we never gon’ change”. If you had any doubt who he meant he tweeted a picture with Nipsey referencing his own lyrics. It’s clear that Nipsey was not just an artist whose label he signed with to get shine with but a man he viewed as a mentor guiding him to the next phase of his career. Unfortunately his death robbed Pacman of a role model as it did so many young people who saw Nipsey trying to leave his old life behind and embrace being an artist/entrepreneur/mogul.

I sense from “Never Knew” that Pacman feels an obligation to step into those shoes and make his mentor proud. “Every other night/questioning my life/Am I doing right? Lead me to the light”. He also acknowledges the traps and pitfalls that come from succeeding in the rap game: “Level up, when you doin good, they’ll hate you for it”. PDG may not be telling you anything you don’t already know, but he’s got both a heartfelt demeanor and a stylish flair that gives the words resonance. It’s probably cliche to say he sounds “West coast” but it’s certainly not a surprise to me to hear him rapping with The Game on “How You Feel.”

Of course it goes without saying there’s a tie that binds all three of these artists, but I think the prominent use of the color blue would explain it well to those who still don’t know. Nipsey used his hustle to work with people across the aisle regardless of their set, and if PDG is truly to follow in his mentor’s footsteps, he’ll do the same as his fame increases. It’s hard to know whether or not he’ll achieve as much as Hussle did, but songs like “Racing to the Grave” featuring Mozzy (Tha Motive) gives me hope he’ll outlive the song’s title. He talks quite frankly about having “lost a gang of peers” and sagely notes that rappers “do it for the streets but they don’t love a n*gga”.

It takes a lot to catch my attention after 35+ years of rap music, and the fact Pacman da Gunman had an interesting name (here’s hoping Bandai-Namco doesn’t sue) and famous connection probably didn’t hurt, nor did the fact that he has the physique of a NFL lineman. At the end of the day though it’s the music that matters, and the deep bass line meets the deep thoughts of “In Too Deep” in an ear pleasing way. “I don’t make excuses/I just make improvements”. Pacman’s clearly a thoughtful young rapper choosing words that have meaning for himself and for those who are paying attention.

I don’t want to oversell “60th St” nor do I think I need to. PDG’s music largely speaks for itself, but even by his own admission he has room to improve and become a better version of himself. There are some people in life who can get far by being so arrogant in their demeanor that everyone believes they are what they say they are (whether they are or not), but you also don’t make many friends or influence many enemies that way. Pacman da Gunna has the potential to do BOTH and I think Nipsey would be proud.