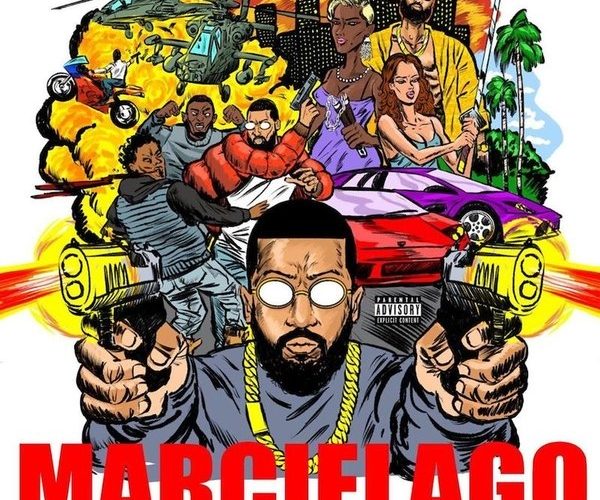 Regular readers will know all about 2010’s “Marcberg” – a pivotal rap record, along with 2012’s “Reloaded”, that helped shape underground hip hop in the 2010s. These are important albums which directly influenced the renaissance of Mafioso rap and the subsequent Griselda movement that supposedly even Drake and Lebron James are fans of. My review in 2013 concluded that “Marcberg” had the better songs, but “Reloaded” is the better album – and I stand by that statement. Even Roc himself acknowledges them two are his stone-cold classics, in a recent interview with Rap Radar.

The Long Island emcee’s more recent work has refined the brand, utilizing drumless, often laid-back production that emphasizes the clean, pimp-like persona Roc embodies in his rhymes. A blend of 70s soul and blaxploitation cinema are clear influences, highlighted by the colorful album artwork that embraces the outlandish. Roc is an intelligent artist, aware of his role in the modern rap climate. With a whole underground movement influenced by his approach and style, “Marcielago” is a statement of self-awareness that embraces the superhero role he has ended up personifying. What distinguishes his monotone flows from his “spin-offs” (as he aptly titles them on “Molly Ringwald”) is the nuance and humor in his writing.

Telling somebody they was probably on their Molly Ringwald because they were “a snotty-nosed kid with ringworm” is ridiculous, yet equal parts hilarious. To describe one’s testicles as “hanging like drapes” is vivid use of imagery, but then Roc has previously described his penis as beautiful.

“Tom Chambers” is a highlight, seeing Roc flip three beats like he’s Primo. Knowledge the Pirate manages to steal the song with a more direct brash take on the English language:

“The type of shit we on…
We give a fuck about your small town or them little blocks that you hustle on
I remain poised, my 40 cal makes a loud noise
All my n—-s is cocaine cowboys
Don’t make me shoot up your one-horse town
Have intercourse with your bitch and drive my Porsche around
Have my enforcers lay my gangsta down
Seventy two ounces, a few pounds allowed
Any “Drama King”, keep a Streetsweeper to control the crowd
Go to your local, strip bar throw a couple thou’
Put some fiends on the corner, have them having samples out”

I’m surprised Knowledge, Ka, and Roc haven’t formed a group and put out a joint album as it would certainly work. Even new protege Cook$ holds it down on the haunting “Puff Daddy”, a track that’s the antithesis of the Bad Boy jiggy sound. He reminds me of 38 Spesh or Bully – menacing yet knows his way around a beat. “Richard Gear” though (one of Roc’s many aliases) is going to be a fan favorite in the vein of “76”, “Snow” and “Tek to a Mak”.

Another change in “Marcielago” is the touch of humanity. “God Loves You” is reflective and a rare letting down of the guard, mentioning his pride at how far he has come and addressing how fickle the rap game can be:

“Sacrifices I’ve made on this path that I laid
Shit was bad ’til I came
I ain’t complain I just mastered my game
The aim was to land with Rakim and Kane
The landscape changed when I went against the grain
N—-s wasn’t quick to embrace (No!)
I could have did the same but I didn’t hate
I just did my thing and prayed, eventually shit went my way
I ain’t dick-ride for no features ’cause I can lift my own weight
I’m really self-made, and I never fell from grace
If they stoned Jesus, I ain’t special neither
Life’s a bitch she don’t appreciate you until you leave her”

It ends up being another standout track; a rare glimpse of emotion before you’re back to his mansion that’s “so clean you can eat off the floor“. You’ll notice the constant need to quote lyrics because Roc at his best is a one-liner machine.

Roc’s 2019 wasn’t as loaded as 2018, but I want to shine the spotlight on a filthy 12″ single with Damu the Fudgemunk that is an absolute must-listen, demonstrating his laconic presence still sounds incredible over beats not dissimilar to the work on “Petestrumentals” and “U N Or U Out”.

But back to “Marcielago”, which I’m confident is his best work since his return in 2017. It isn’t without its flaws – the horns on “Bomb Shelter” drown out both emcees (it features Willie the Kid) to the point where the rhymes become the beat and vice versa. A shame, because Willie rarely disappoints. “Saw” is also a dramatic production that builds yet never quite rewards the listener outside of the rhyming.

Roc Marciano isn’t likely to win over those who aren’t into this style of hip hop, but it certainly feels more accessible than the DJ Muggs record “KAOS” or even the “Rosebudd’s Revenge” albums. With Benny, Westside, Conway, Pusha, Freddie, and Roc all firing, the next few years could deliver some great music that is, quite frankly, shaping the sound of hip hop to come. And the best thing is, they all have their own character, aesthetic and unique vocal presence.