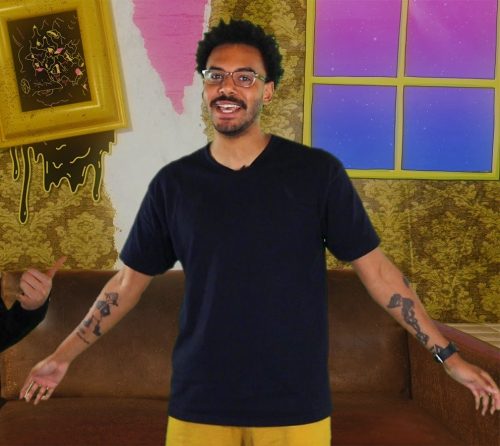 Live streaming and the culture that surrounds it is nothing new. What’s changed are the demands of the current world. We present to you a new kind of program, one that combines music, animation, internet culture, story and collaborative fan involvement – an interactive live performance narrative adventure!

The series will be centered around Zack Fox, an everyman living on Planet Ass surrounded by animated characters such as his asshole pitbull sidekick Marlow or his alien landlord no one can understand but him. In each episode Zack will be visited by a featured musical artist that will help him solve his problems, or he’ll solve theirs. Always being sent on an escapade across realities in his ‘94 Corolla turned Mad Max-style spaceship, music artists will perform along the way, celebrating their new albums. Zack will have to go out of his way to be a nice guy, appease his own cast of characters and somehow make it out alive, all while dealing with the wildest shit.

For the debut episode, Phoebe Bridgers will star. She will need Zack’s help to make it to the Cyber Goth Prom in Outer Space! But something’s not right, she needs to make some special punch to change into her true human form! And who will be her prom date??? Zack and Phoebe will traverse the galaxy to find the ingredients and answers. All will climax when they finally make it to prom where Phoebe will perform songs from her internationally lauded new album, Punisher.

With an overarching storyline and an outrageous premise, we’ll introduce a level of creative writing not usually seen in live streaming. RELEASED! will push the boundaries of technology to create something totally unique AND endlessly fun for the fans. Or as Zack put it, “This shit’s on the forefront.”