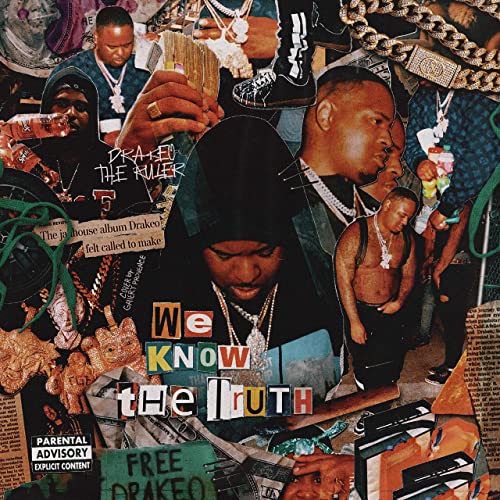 We Know the Truth

Drakeo the Ruler :: We Know the Truth

If you’ve been following the saga of L.A. rapper Darrell Caldwell b/k/a Drakeo the Ruler, you’re aware that he’s been in and out of jail for the last three years on various charges. After a LAPD raid resulted in his arrest for unlawful possession of a firearm by a felon, things escalated dramatically to the point he faced a potential minimum life sentence on first degree murder, attempted murder and conspiracy to commit murder. To the surprise of some Drakeo was acquitted in 2019 after the jury in his trial was unable to reach a verdict. The district attorney (like our current President) couldn’t handle losing and came back at Darrell with a whole new charge — criminal gang conspiracy with his fellow Stinc Team rappers being “the gang” as such. Realizing they couldn’t make that stick to him either, Drakeo was offered a plea deal which he accepted. He got out of jail last month.

What does an up-and-coming rapper do to celebrate finally being a free man? Go right back in the studio to record more music. “We Know the Truth” is the result and the lead single “Mardi Gras” doesn’t find the raspy rapper dialing down the rhetoric one bit. The same things that made him mixtape famous before multiple bids are the same topics he’s talking about now. “Niggaz always talking nerd shit, it disgusts me/now he want to beat the bitch up cause she love me.” There’s some irony to dissing “nerd shit” considering he’s standing in front of a bunch of video game cabs, but considering he’s also dripping with ice in the clip it’s probably just a reflection of how much wealth he has to throw around. He’s not shy about flashing that ice either as the album’s closer “Polar Bear” shows.

“I looked at my wrist and we both went blind” raps Drakeo, and given what he’s been through it’s hard to blame him for celebrating a little bit. “It’s not gonna stop man because I’m the truth […] fuck you niggaz feelings — go get some money, bitch.” That’s a little bit more than celebrating Darrell. That’s openly antagonizing people who may or may not have been sour on you to begin with. It also feels a little out of touch with the reality of the world most people are living in during a pandemic. There are many people out of work, struggling to pay rent, standing in line for food to feed their kids. Meanwhile Drakeo rubs it in on tracks like “Hundiddy” by saying “My wrist that’s a hundiddy, my neck worth a hundiddy, my whip cost a hundiddy.”

Now is the time in the review where we give Drakeo the Ruler the benefit of the doubt and say that it’s a persona he enacts for the sake of making music. We could generously assume that Darrell Caldwell is much more humble and grateful in real life. One could even say that Drakeo is the modern day equivalent of Ric Flair. Some people loved how glamorous “The Nature Boy” was, while other people resented him for constantly flashing his expensive Rolex watch, thousand dollar suits and custom made robes in their faces. The great part is that if you’re good at being a wrestling heel it works either way — if they love you they’ll pay to see you, and if they hate you they’ll ALSO pay to see you in the hopes that you’ll lose. There’s no losing for Drakeo on “We Know the Truth” though. He just keeps on winning.

“+Cold Devil+, bitch I’m icy hot/I’ll do a nigga bad if the money good enough.” The twist on “Captions” is that he immediately brags that in court all he heard was “ten not guilties,” so he’s interchangeably mixing the real Darrell and the fictional Drakeo on the song. This is not by accident. Within seconds Drakeo is telling us how the whole thing was a set up. “They talking ’bout some shit that never happened/cain’t believe they almost made me stop rapping.” Suffice it to say “The Ruler” isn’t exactly being +Slick+ here. Both men dealt with a lot of legal battles, but Ricky Walters went out of his way to distance himself from his criminal past when given a second chance. Meanwhile Drakeo wants us in the same song to believe everything he was accused of was a lie… but he’ll kill someone for the right amount of money.

With the right suspension of disbelief one could overlook the glaring contradictions, the fact Drakeo the Ruler has a generally unfriendly rap persona, and the fact he himself can’t decide if it’s real or all a work. None of that changes the fact that his vocal delivery gradually wears on you to the point of exhaustion. It’s like listening to The D.O.C. after he went through a windshield, and even he recognized that just wasn’t going to cut it and handed off the majority of the vocals on his album to other people. This is Drakeo the Ruler every day though, with no car accident to blame it on, all the time every time. Perhaps if the beats spread across 18 tracks of “We Know the Truth” weren’t so monotonous it would work. It doesn’t. Guest appearances are the only thing that save your sanity.

Every part of me wants to congratulate Drakeo on finally beating the rap after years of prosecutors throwing shit at a wall hoping something, ANYTHING would stick to him. In all likelihood he’s right that the charges were a bunch of trumped up bullshit stemming from the fact he owned a firearm that he wasn’t supposed to. They wanted him to stay behind bars and the fact they had to offer him a plea when they knew that they’d lose AGAIN in court must have been humiliating to the D.A. and everyone involved. So props Drakeo, you beat the system, and now you’re a free man living your best life. Sadly I’m not that enamored with your music, but I still wish you all the best going into 2021 and beyond.