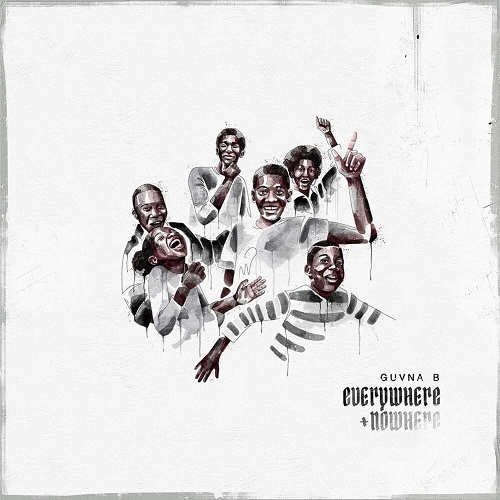 If RapReviews.com’s UK Month 2019 would have been the final chapter (and for a while it seemed like it), it would have been a worthy farewell. The annual monthly focus on rap and related music from the United Kingdom was perhaps a slightly random but still well deserved nod to one of the most diverse and dedicated scenes worldwide. If you’re a RapReviews regular, I would expect you to appreciate our efforts because a month devoted to a specific scene reflects our curiosity and expertise at the same time. To put it bluntly, when we take you off the beaten path, you better show some interest!

For the RapReviews staff too it was an opportunity to discover music we might have remained oblivious to if it wasn’t for UK Month. In 2019 I came across Guvna B for that exact reason. The Guvna of “Hands Are Made For Working” struck me as an independent thinker who wasn’t afraid to compose an album in memoriam of his deceased father. His 2020 offering “Everywhere + Nowhere” indicates that he hasn’t fully found closure yet. Opener “Bitttersweet” offers “something like an update” on his turbulent inner world. But it’s more than a simple tally of joy and pain. It’s a lesson in finding one’s bearings when faced with life’s discrepancies. Guvna manages to address his dad and God, two figures who are close to him but not phsyically present, with the same intent.

Guvna B is an articulate artist who works with contrasts. In “Cushty”, the cold, hard facts await just after the warm welcome. But even though he admits that “days in the ends be bleak”, he always tries to find a solution, offering tidbits of food for thought like “Gotta turn our back on our stubborn ways” or “Youths in the ends got talent and skill”. This MC is literally out to change the conversation about Black Britain:

“I don’t wanna hear ’bout all them straps
I’m from the ends, that’s boring stats
‘Sis just got into Cambridge, bro’s in Oxford’
Yeah G, more of that!”

One fundamental psychological issue that rap finds itself occupied with is self-esteem. There is often so much of it that overcompensation seems like the most obvious explanation. As a quote unquote gospel artist Guvna B is in the comfortable position of being able to refer to a higher calling. This enables him to express self-doubt while always seeing a way out of it. That’s the formula behind the confident “Mazza”, which concludes: “This is where God wants me”.

That’s why songs of gratitude are standard in this corner of popular music. In the mid-part of “Everywhere + Nowhere” Guvna B gives in to his gospel leanings with “Fall on Me”, “With Me All Along” and “You Never Let Go”. Not only are these songs musically conscientious in their intent to be grateful and inspirational (they feel like bonafide gospel numbers), they are also deeply honest, Guvna B relating at one point, “The waves of depression could have drowned me” and at another, “Sometimes I feel like I don’t belong here”.

The days when rap artists were noticeably on a mission are largely over, still such a kind of motivation will sometimes shine through. “I do this till I effect change / that’s why I picked a pen and pad in the first place” (a quote from “Fall on Me”) is proof that rap and faith are not a mismatch.

So much the better when critical thinking is involved. Although critique of the clergy is as old as Christianity itself, not every religious person is aware of the dangers of blind worship and blind loyalty. How Guvna B deals with wrongdoings by church officials in “Safe Place” is rhyme writing at its best, right down to him defending his decision to keep the faith in his congregation.

Completing the dish – also musically – are “These Are the Days”, a collaboration with Ezra Collective, and “Battle”, sampling the similarly inspirational UK garage staple by Wookie and Lain. In so doing, Guvna B carries on British musical tradition.

I confess to liking Guvna B. He may not be a major figure in his country and “Everywhere + Nowhere” was merely ‘the UK’s highest charting non-explicit rap album of 2020’. But when he describes himself as “not quite Stormzy“ and “not quite Lecrae“, the answer should be clear – being Guvna B is quite enough.