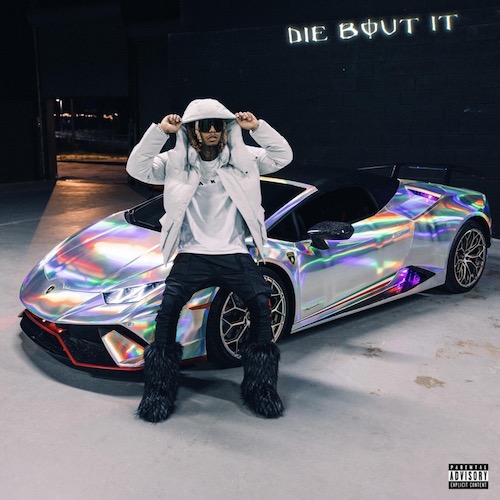 “DIE BOUT IT” is the first official studio album from Atlanta rapper Lil Gnar since his debut, but he’s already had a handful of mixtapes and EP releases along with the usual slate of guest appearances. Things really started to accelerate for him in 2019 after the Cole Bennett directed video for “Death Note” featuring Craig Xen and Lil Skies dropped. Nearly 20 million views later it’s fair to say a major album was inevitable. “More is better” seems to be the philosophy when it comes to promotion because this album has no less than EIGHT official music videos dating all the way back to 2020.

Gnar and Lil Uzi Vert are definitely having fun on “Diamond Choker.” They’re playing golf with wads of cash while curvaceous women twerk. They’re showing off expensive iced out chains. They’re tearing through paper walls like the Shockmaster (without tripping). I think I’d be having fun on this video shoot too. Thanks to a bouncy beat from the brotherly production team of Bankroll Got It, the song is fun and infectious. DJ Scheme and Nuri provide even more bass on “New Bugatti” featuring Chief Keef and Ski Mask the Slump God. It sounds like background music for a trill ass video game — Grand Theft Auto: Trap Stories.

If a song from “DIE BOUT IT” was released as a single you can guarantee two things about it — it’s got a listenable instrumental and featured stars. I understand Lil Gnar showing love to the people on the scene, the people who gave him features on their projects, but at times it makes me question if Gnar is the star of his own album. The only time I can’t fault the process is the song “No Reason” featuring both Yak Gotti and the late Lil Keed. At this point every appearance featuring the late Mr. Render is as valuable as the ice on all those chains, because he’s not around to make more of them.

Another guarantee is that if Bankroll Got It produced it, the song can be saved from the proverbial scrap heap. The singing on “Missiles” featuring Trippie Redd is AutoTuned to the point it makes my speakers crackle like the cones are breaking, and that’s something I expect bass bottom beats to do, not the vocals. If it weren’t for Bankroll putting hard percussion and smooth violin strings into it, I’d have turned it off. Well, maybe not. The line “excuse my bad language, I think I’m the shit” makes me laugh. Well played.

“DIE BOUT IT” does have some misses along with the hits. “Shoebox Money” and “Wazzup” blow out everything from the bass to the pitch correction and could have been dialed back ten notches. “Dem Days” sound like it’s trying to clone “Miss the Rage” at a higher pitch. I’m sure an instrumental version that’s slowed and reversed with extra reverb will be a viral hit. These are offset by tracks like “Digg” featuring Germ and “Moshpit” which haven’t been made into singles or music videos yet. There’s still time.

Lil Gnar’s presentation can be summed up in one line: “Bitches love Gnar — who the fuck are you?” He drops pop culture references to [adult swim] and Toonami here and there, but for the most part his music is about how cool he is and how much people love him. I neither asked for nor expected more from Gnar than that. I’m not coming to Gnar to learn about world history or get his opinion on social issues. His music is about living fast and hard. Run the red lights, avoid the haters and their weaponry, and talk trash about “the niggaz acting like bitches.” He’s not the type of rapper you want kids to look up to, but we both know that’s exactly the kind of endorsement he’d want. Lil Gnar doesn’t want to be a role model, but he’ll happily be an anti-hero and a rap star. He’s both.