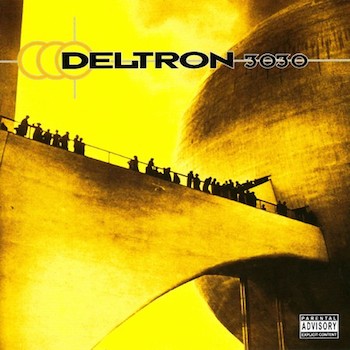 D-E-L, he rips microphones. Actually, he's been ripping them for quite a while now; he's been on record since "I Wish My Brother George" came out in 1991 on Elektra. The 90's were an up and down decade for the Delphonic one - first hailed as a next generation P-Funkateer, then quickly dismissed by the public and his label for the darker sounding but much more ambitious "No Need For Alarm." Del didn't drift away into obscurity though - his Hieroglyphics family of rappers and producers kept his name alive with independent label releases and internet based support. That cleared the way for him to return on Hiero Emperium earlier this year with the album "Both Sides of the Brain."

Del himself apparently wasn't satisfied with the statement, "There - I'm back, I never really left, and I just proved all you naysayers wrong." The man who once christened himself "The Funky Homosapien" is more ambitious than that. What should such an ambitious and cutting edge hip-hop lyricist do? Hook up with 'Dan the Automator' of course; the same man responsible for Kool Keith's revolutionary "Dr. Octagon" and the brilliantly demented "Handsome Boy Modeling School" he co-authored with Prince Paul's help. The stage was already set for this conjunction when Del contributed a lesson to the School in the form of "Mangetizing," but it was only a taste of what the future held.

The future is now where Del finds himself squarely located. By holding court in the year 3030, Del has the luxury of wielding his futuristic cyberpunk rhymes in complete comfort while still being able to sound suprisingly contemporary within hip-hop topics. The Automator's lush beats, along with Kid Koala on the turntables, provides a lush backdrop for the wordplay Del intends to display. Even this normally jaded reviewer found himself impressed by the depth of quality songs. The orchestral title track "3030," the looping Alice in Wonderland quality of "Things You Can Do," the Pete Rock-ish horns of "Memory Loss" with Sean Lennon's musical assistance, and so much more.

Del's goal is clearly to shake up the groundwork of hip-hop and the world as a whole as we know it. As the introduction to "Virus" says, "Crisises.. precipitate change." Del's approach to the heavy topic of wiping out the world's hard drives with the ultimate computer program is almost laidback - ho-hum, I'm "crushing corporations with a mild touch." He's hit the nail on the head here - his self-confidence about the ease of his victory combined with Kid Koala's clever "robot" scratching make his impending revolution sound like it's present day. In fact, when he raps "Human rights come in a 100th place, mass production has always been number one" he is just as clearly talking about a Nike factory as one for microchips.

Never taking his role too seriously, Del interjects humor into his music and coordinates alternately funny and bizzare skits between songs. The "National Movie Review" may be the most brilliant of them all in that it clearly represents a future person looking back on 20th Century cinema and finding Bob and Doug McKenzie to be our most landmark achievment. Scary to think that might be the only facet of the modern day era that survives, but Del clearly thinks that rap (and his songs) have the best chance as stated on "Madness":

"Yo, I must appeal to you people with your faculties
cause everybody else is gonna laugh at me
People try to get over and take a crack at me
The universe is one; I see what rap can be -
Glorious - put in the Smithsonian on podiums
for holy hymns, but you see who's controlling them"

Repeatedly, Del's songs function at the highest level of thematic cyberpunk, auditory pleasure, and lyrical excellence bar none. Song after song hits the mark: "Time Keeps on Slipping," the remix of "Turbulence" and more. Trying to find a weak song on this album is harder than finding a flaw in a Vince Carter slam dunk cause BOTH come down harder than a ton of bricks. As Del says himself on the album, "I remake my universe every time I use a verse." Clearly excelling beyond the limits of traditional rap, Del's "plain of existence is amazingly different" on this futuristic LP. In fact, we've coined a new term to describe Del and Automator's sonic union: neo-rap. Unless Automator works with another rapper as gifted, Del may reign supreme in this genre of his own design.