Team Rezofficial :: The World (And Everything in It) 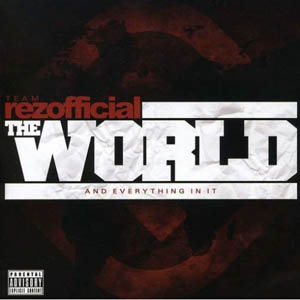 Team Rezofficial caught my attention on YouTube with their video "Lonely." The musical theme of the track instantly grabbed me, and the two featured rappers enhanced it with inspired performances. It was my type of current rap, daring, hard-hitting, melodic. Plus it had that certain something it needed to stand out. If I had to give it a name, I'd call it a touch of swing. I later learned that "Lonely" had been the first video by a Canadian native rap act to reach the top ten in MuchMusic's long-running Rap City show, even climbing all the way to the top. My natural curiosity led me to order a copy of the album that contained the song, 2008's "The World (And Everything in It)."

The Team began as a production duo called Rezofficial Music comprised of Stomp and Jay Mak. They recruited MC's to expand to what since 2003 is known as Team Rezofficial. Currently vocal duties are shared by Big Drezus, Hellnback and Tomislav. With three mic wielders and two beat programmers, one can expect Team Rez to deliver the full hip-hop experience. They do, with only few corners cut.

"The World (And Everything in It)" is rap music that doesn't want to be second to anyone - but in its own tragic way still is. The producers artfully copy beats from south of the border. Jay Mak's "We Are the Future" could easily be mistaken for a Just Blaze production. Stomp and Da Heala's "Get Money" has Polow Da Don written all over it, their "So Fresh" is derivative of "The Chronic 2001"-Dre, and "Paper Music" possesses the swag of a Scott Storch beat. Whatever Stomp and Mak touch turns to post-2000 mainstream rap, and the variety is even more astounding. The "Intro" alone blows two banging beats. Stomp's "You Can Get It" absorbs its southern influence with complete ease and "Make Way" shines in the dramatic department. Jay Mak's "Its Over" sounds like something Black Milk or J Dilla would come up with in an energized state, while "Bounce in a Circle" does the Bollywood tour and "I Must Leave" serves up sped up soul in a lush jazzy setting.

Not only are the beats per se tight, they also inspire suitable content. The crackling old school soul of "Magic Days" causes Hellnback and guest Sleezy Sleez to reminisce on the music of their youth, which ranged from Marvin Gaye and Funkadelic to the emerging rap scene: "6 N the Morning My Mind was Playing Tricks on Me / what they recorded really had effect on me." Hellnback remembers "listenin' and wishin' that I spit that first" and concludes, like many others before him, that music calms the savage beast: "If it wasn't for you I wouldn't be livin' rappin' / probably be dead or in jail wonderin' what happened." He then makes the seamless transition into the solo track "Take My Hand," where he offers his support to family and friends, be it the man led astray or the mother who was always there for him. Singing the hook himself and interacting with the melodic beat, Hellnback comes up with the epitome of heartfelt rap track.

"I Must Leave" is another happy marriage of sentimental beats and rhymes. As far as emotional tracks go, however, "Pain" is nearly flawless, Jay Mak's beat pulling all strings with a wistful tune set to loud, stripped drums and the rappers combining rhythm and melody like modern day MC's are expected to. Another highlight is the collective effort "Tarintino Music," a conceptual storytelling joint supported by a supreme, western-themed score courtesy of Stomp and Cam Buffalo. Told in the third person, the song retraces the vicious circle of street life with conversations between the verses tying everything together.

It's hard to find fault with these songs, especially since they also allow the rappers to pursue personal interest. It's when they want to be Mr. Me Too that issues arise. The problem is not so much that the tracks of the more superficial variety lack lyrical significance in terms of 'meaning' or 'message,' but that Team Rezofficial simply fail to come up with interesting lines. Swagger needs substance. You'll find them doing what business-minded rappers like to do, detail their gear, their accessories, the contents of their wallets, but it's done in completely forgettable ways. "Everybody know my name money like John Doe" is as far as their one-liners will go.

There can be several reasons for this. One seems to be that Team Rezofficial want to run with the big dogs, causing them to streamline their expression to a majority format. Consciously evading their own background but not wanting to fully embrace the often questionable content of mainstream rap either (sex and drugs are almost absent, crime is only marginally present), they aren't left with much to say. Also lacking the resourcefulness for lyrical self-aggrandizement, they couldn't be further from a Lil Wayne or a Fabolous. The paradox is that these types of songs by definition are supposed to come off witty and confident, and while offerings such as "Get Money," "You Can Get It," "Paper Music" and "Pump That" sure SOUND witty and confident, upon closer examination they only expose the wild goose chase the rappers are on. Big Drezus (AKA Big Dro) is the exception every now and then, for instance when he spits on "Paper Music": "I'm deadin' misconceptions / natives out there wish that I missed conception / cause I spit like a rip from the Smith & Wesson / while you slip like a kid taken in for questionin'."

There are songs on this album that would make you say, "Why haven't I heard about these guys yet?" You might also ask yourself, "What exactly is dude's problem here?" It certainly isn't that I want Team Rezofficial to pigeonhole themselves as aboriginal rap artists. (With two of them being ex-members of War Party, they seem to have been down that road at least partially.) This isn't to prohibit peripheral rappers to floss and write club tunes. Let them use rap vernacular like "Get familiar" and "Who you know that..." Let them sample Tony Montana (check the album title for clues). Let them employ DipSet flows, it didn't hurt "Lonely." Rap music can pat itself on its back for inspiring folks far away to adopt its philosophies like Team Rez do in "We Are the Future," bringing Biggie Smalls and Cee-Lo Green together when they rap:

"Look, real natives do real things
Simple and plain, forget the mindgame
Sonny, they got you locked up in the mindframe
Now you think you can't get out, or better yet get up
You need to get up, get out and get somethin'
Don't spend all yo time tryina get high
You need to go 'head and feed our future
cause me and mine gotta do for me and mine"

There's a way out for Team Rezofficial. They have professionality down pat, now it's time to master originality. That would truly be "doin' it major league."