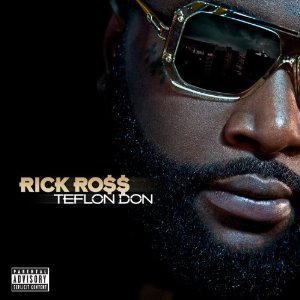 If there's one thing success attracts it's haters, and William Leonard Roberts the Second has had more than his fair share. You know him better as the self-proclaimed "Teflon Don" of Florida hip-hop, the one and only Rick Ross - well perhaps not the ONLY Rick Ross. Like so many other rappers Roberts' nom de plume is based on an infamous drug kingpin, and by all accounts 'Freeway' Ricky Ross was highly successful at his trade long before the future rapper had finished the first grade. Even when Ross was incarcerated and his empire fell, the legend of his fame and fortune lived on, and the aspiring rapper Roberts emulated his success with tales of his own lavish lifestyle. His raspy vocal tone, cinematic lyrics and above average delivery along with well placed connections to DJ Khaled and Trick Daddy quickly propelled the modern day Ross to superstar status on albums like "Port of Miami" and "Trilla." The haters pounced, claiming Ross was a fraud, and said the self-professed drug kingpin had IN FACT been keeping drug kingpins behind bars as a corrections officer.

In a "truth is stranger than fiction" twist of fate, it turned out to be 100% true. Photos and records surfaced proving Roberts' previous employment, and he revealed to shocked fans he had spent more time keeping people behind bars than being incarcerated himself. This shouldn't have been that shocking. Ross had one of the most convincing drug dealing personas in all of rap, but the fact his stories were so cinematic was indicative of his ability to write a compelling screenplay, and the producers who provided beats turned it into a movie we all wanted to watch. As fun as Al Pacino's performance was in "Scarface" we all know at the end of the day he went home to a mansion that was paid for by his acting - the drug kingpin was left behind on the set. For some reason hip-hop still has a tough time shedding the "keep it real" ideal though, expecting that rappers actually live what they talk on wax on the daily. As a result Ross' credibility took a hit and many people wrote Ross off as a rap star exposed, unable to accept his fictional rap had been entertaining all along.

With 2009's "Deeper Than Rap" Ross proved the haters wrong and his career continued unabated. His album gave the controversy about as much lip service as it needed, while continuing to spin entertaining tales of a life neither he nor most of his listeners had ever led growing up. The funny thing was the criticism actually improved Ross' rap as he injected more of himself into the album, giving his listeners their first real glimpse behind the scenes to things that weren't fake. Ross' really did grow up in Carol City, Florida and really did struggle to work his way up to overcome the limits of his environment and expectations of society. Through all the debate about whether or not Ross was real or fake, people overlooked the fact that taking a job you might not like just to pay rent and keep the lights on is as "real" as it gets. If you've dreamed of a mansion in the sky while serving sandwiches and fries, that's real too. Perhaps you even wrote a song about it. Maybe you even thought about recording it. The difference is that Rick Ross actually did record it, discovered he was good at it, and could make a living off of his rap.

"Teflon Don" finds the rapper enjoying the fruits of his labor even while the naysayers continue to expect him to prove the unprovable. Over a short but impactful 50 minutes of music, the gravelly guru of hustling expands his repertoire beyond debates about authenticity. He's got so many guest stars on this album that the only song where he's completely solo (ironically) is the opening track "I'm Not a Star," given a bouncing and dramatic brassy backdrop by the J.U.S.T.I.C.E. League. "Niggaz feel my pain, I ain't even gotta say it." And yet he does. "All black Lamborghini, smokin on the sticky/Got a couple dollars, now this nigga think he Ricky." Even though he professes not to be a star, the songs betray him, showing that he's still able to weave together dope beats with great stories. At times his presentation rises to epic heights. The double entendre of "Free Mason" finds Ross OUTSHINING Jay-Z over a beat produced by the aptly named Inkredibles.

Ross: "We the lost symbols speakin cryptic codes
Ancient wisdom valuable like gifts of Gold
I embark on life my path is all math
I understand the codes these hackers can't crack
I understand the folks expect me to fold
Community control to violate parole
I wont fail but a lot of men will
I'm iconic in the field like Solomon's Seal
Uh, it's just in an intro
Allow my flow time to sink into the temple
Freemason, freelancer
Free agents, we faster
Big contracts, big contractors
Built pyramids, period, we masters
No Caterpillers, it was just a lot of niggaz
A lot of great thinkers and a lot of great inventors
All white mansion I'm the child of God
All black diamonds, times were hard
New Rolls Royce, guess you made it nigga
All white neighborhood, you they favorite nigga"

There's definitely more to Rick Ross than meets the eye, and just because he keeps his inner Talib Kweli hidden doesn't mean he can't let it out to shine from time to time. His rap here is sardonic, grandiose and iconic. The contradiction he offers with the words "you they favorite nigga" is a direct and wry challenge to the proud history of science and architecture he offers, a not at all subtle reminder that perception goes far behind whether or not rap fans feel he's "real" when ignorant white people decide you're a "good nigga" or "my kind of nigga" in a condescending way that implies he doesn't deserve success. Perhaps the people in that neighborhood think he should be serving them tea instead, and maybe a cop will pull his Lambo' over thinking he's in the wrong part of town. Ross knows he can build pyramids with his hands or his words, no matter who doubts him or thinks that's absurd. The J.U.S.T.I.C.E. League comes through again on "Maybach Music III" and even though he shares the spotlight with Erykah Badu, Jadakiss and T.I. he still proves he can hang and rap with the best of them:

"How dare you try to knock a nigga?
Street scholar graduated no father figure
Still tote chrome, check my chromosomes
Meet me halfway with things in the mobile homes
Money machines yeah they RRRING like a mobile phone
I'm a 7-Up but need a Coca-Cola loan
I'm in the hood like I'm James Evans
Cashmere handmade sweater
Me and money got a vendetta
Lookin back to tell the truth I coulda did better
Parents never had a good job
Now it's black American Express cards"

Before readers get the wrong impression this is not the story of Rick Ross rising from a dead rap career like Lazarus to the amazement of all. Some may have DECLARED it dead, but Ross has been consistently putting albums year after year, and even when his image was in doubt his constantly improving rap was not. If there's a downside to "Teflon Don" it's that the new and improved Ross has so many great beats from the likes of Kanye West, No I.D. and Lex Luger yet still ends up sharing the billing with Drake, Diddy and Gucci Mane. While it's good to see hip-hop stick up for Ross and his charismatic storytelling, their support sometimes gets in the way of hearing what Ross actually has to say, and at the end of 50 minutes you're left wanting more of Ross than you actually got. He's still telling drug stories and it may be that he always will, but it's not hard to be excited about the jewels he drops here and there to remind us he can and WILL be more than anybody expects him to be. If he continues to work with the best beat maestros in the business, use his raspy vocal tone to tell good tales, and ever so subtly work social issues into his raps then Ross will continue to be relevant to listeners long after the "corrections officer" issue is forgotten.