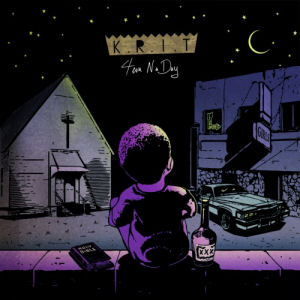 Andre 3000 once famously quipped, "forever never seems that long, until you're grown." Well, for Meridian, Mississippi's own Big K.R.I.T. it seems like it's going to take forever for his major label debut album to see the light of day. It could be label politics over at Def Jam, it could be sample clearance issues. It's hard to say. I don't really know if it's bothering Big K.R.I.T. that much though, as he continues to do what he does best, gaining fans in the process of it all. Just shy of one year ago, Krizzle released "Return of 4Eva," the follow up to the critically (no pun intended) acclaimed "K.R.I.T. Wuz Here." The project did well and I even listed it in my top five releases of the year. It came in at number two, behind Killer Mike's "Pl3dge." Having the past as a reminder of what K.R.I.T. is capable of, the question becomes whether or not he can continue to display the talent that got him selected as one of XXL's Top 10 Freshmen in 2011.

I'm pleased to report that Justin Scott doesn't appear to have lost a step with this project. Personal, heartfelt lyrics and soulful production have been key factors in K.R.I.T. building the following that he has amassed up to this point in his career, and this time around he's coming with much of the same. After the brief intro on "8:04AM," things kick off with "Wake Up." The track features Willie B on saxophone and hits on the oft-discussed topic by K.R.I.T. of waking up and actually making things happen...even if it's at the expense of missing a few phone calls because "being broke ain't fun" and the pity party he's thrown for himself starts to get a bit dull after awhile. "Yesterday" is another ode to K.R.I.T.'s dearly departed grandmother, who he often points to as his greatest inspiration. He reflects on several things including her kindness, her cooking and her lectures, among many other things.

The project's first single, "Boobie Miles" was released about a month ago and to some, can be seen as an extension of "Hometown Hero" which featured audio from Derek Luke's portrayal of the cocky, ill-fated Boobie Miles from the film "Friday Night Lights." K.R.I.T. reminds the listener to give their all, but also be leery of those who won't be around after a major injury or setback. In the case of Miles, it was a torn ACL. "4EvaNaDay (Theme)" is right on par with the "R4 Theme" from "Return of 4Eva" leading into the slow rolling "Me and My Old School." And if you didn't already know, it's much more than a car...it's a time machine, a spaceship and basically something quite precious. You have to take your time when you maneuver it, doing your best not to rub the curb or hit any potholes. It's that serious.

In addition to K.R.I.T.'s birth, a lot of other things happened in "1986." For one, it was the first year Martin Luther King Jr's birthday was observed as a national holiday. Other occurrences that year include Michael Jordan's 63-point game against the Boston Celtics in the NBA Playoffs and Run-D.M.C. hitting number three on the charts with their "Raising Hell" album. Towards the end of the track, things switch up with an old Bobby Womack sample, leading into "Country Rap Tunes." If you can recall, the colloquialism was coined by the late, great Pimp C. Reggie Miller is not allowed in the "Sky Club," so I'm assuming it's kush or nothing at all when it's time for K.R.I.T. to take off. "Red Eye" examines the ins and outs of trying to balance a personal life with a professional life, as K.R.I.T. raps:

"I'm like, what happened to us?
Maybe I'm rappin' too much
I've been missin' your touch
Sometimes I'm out and I lust
What if love ain't enough
And all we have is this trust
What if I'm fuckin' that up
So you don't trust me as much
I'm wastin' your time
To say I'm straight, I'd be lyin'
It's either you or this music, but I can't make up my mind
[...]
I settle for less
So when I'm tired, I stress
I go through the motions, pretending I'm at my best
Fall victim to flesh
I live to be fresh
But this ain't what I expect, because my life is a wreck"

While we're not all world famous entertainers or anything, I think anyone who has chased a dream or pursued a passion and had to choose between that and a lover can relate to that song. Likewise, anyone who's been scraping just to get by or perhaps looking for something to just get them through the day should be able to relate to "Down & Out." Sippin' on a drink or two doesn't ease the pain and smoking on weed isn't necessarily going to do anything to increase sanity, although their users probably wish they would. Perhaps the best piece of storytelling comes on "Package Store." Here, we are privy to the tales of a philandering preacher, a drunk K.R.I.T. and a financially frustrated felon, as K.R.I.T. raps:

"Click, clack
Against my head went a Glock
From a hoodlum on the block
What's what to me? What you got? You'll get shot
If you refuse to come up off that
What made you floss that
Outside the package store
You know we out here like wolves searchin' for antelope
Lambs and sheep, prey on weak
Don't you reach under your seat
I'll bust your head like cantaloupe
Then I replied, out for a nightcap
Didn't bring my tool with me 'cause I assumed I'd be right back
Shawty said the neighborhood was cool and it wasn't like that
But here you are with a loaded gun and I'll be damned if imma fight back
So he went on to loosen up on the aggression
And proceeded to lecture me on the troubles of recession
And ain't that many jobs out here hiring convicted felons
So instead of buying what he wants, he takin' what they sellin'"

The project starts to wind down, but not before "Temptation" finds K.R.I.T. in the strip club trying to get some good wings and possibly find some one-night love. "Handwriting" is Krizzle's take on his time in the industry thus far, stating that he would rather make great albums than cook up hits and he questions whether or not he's rapping in vain. "Insomnia" has K.R.I.T. making his way to his lady's house at 4AM because she has the ability to help him get to sleep, but not before a romp in the sheets first though. "5:09AM" and "The Alarm" close out the show and the latter poses several introspective questions.

One knock on both "K.R.I.T. Wuz Here" and "Return of 4Eva" was that they seemed to go on and on. I can agree with that to an extent and from my first few listens, I can say that this may be the first project of K.R.I.T.'s that doesn't really feel bloated. Coming in at just under 50 minutes, I think that most listeners won't have a problem staying tuned into the music this time around. As I've pointed out, the production is soulful and smooth. I'm sure K.R.I.T. got his fingers nice and dusty while digging up some of the samples used here. Lyrically, Krizzle seems as if he's coming from a point of sincerity...or he's a pretty damn convincing thespian. Either way, it's highly appreciated and it gives an extra bit of shine to the package that is Big K.R.I.T.. I have no idea when "Live From the Underground" will hit the streets and it very well may take forever. But projects like "4EvaNaDay" make the wait a little easier.