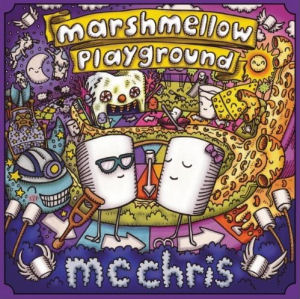 The biggest asset and biggest criticism of mc chris over the years are one in the same - a distinctively high pitched and arguable UBER-nerdy vocal tone. It certainly lends itself well to doing voiceover work for cartoons, but it causes his detractors to overlook the dope rhyme writing ability and a flow he's spent years polishing to a professional level. That's not the only problem though - when you have a voice that sounds like a pre-pubescent boy and you DO work in cartoons, you tend to attract an audience of children whether you like it or not. I've seen it first hand. Even though Aqua Teen Hunger Force is rated M for mature, tons of tots show up for his concerts and rap along word for word as he takes us all to 6-1-2 Wharf Avenue.

I'm sure all of the children in the audience had parental supervision, but whether he wanted to or not, mc chris couldn't change up the lyrics of his songs to be age appropriate to a minority of his audience at the club that night. He may have a youthful voice, but the majority of his paying audience is adults who relate to his topics - Star Wars, Tarantino movies, Harry Potter, et cetera. It's worth noting that we addressed in the "Race Wars" review that a lot of these topics USED to be considered nerdy, but as they've gone mainstream so has the appeal of mc chris' music, leading to songs like "Hoodie Ninja" being featured in car commercials. Back to subject at hand though, and that's the conundrum an artist like mc chris has - a small but noticeable part of his audience is very young, yet the topics of his raps are far from age appropriate - drinking and sex being frequent topics. What's a guy to do?

"Marshmellow Playground" is the answer. Since he already sounds child-like to begin with, it's actually a natural fit for him to rap about things a kid would relate to, on a drug and profanity free album. In fact the most dangerous thing about this CD is that the protagonist he portrays is visiting a playground that's NOT made out of soft fluffy marshmallows. A series of linking skits between songs feature him and a friend talking about whether or not it's safe for them to be playing there, even though it seems their parents may be unnecessarily nervous-nellies. Getting the occasional cut, scrape or bruise from playing on "The Jungle Gym" as a kid wasn't that bad:

"Well your dad's got a point
but I certainly do like climbing up on them
and like, climbing down, the jungle gym
And sometimes I pretend that I'm a monkey!"

Even though there are eight tracks on "Marshmellow Playground," the entire thing clocks in at only 13:30, and thanks to the aforementioned skits there are only four full length songs. There's an amusing and charming innocence to the songs on this album, particularly if you're a devoted mc chris fan who recognizes how un-PG many of his songs are, but if you like hearing him rap about smoking 40's and drinking blunts then a track like "Best Day Ever" might not be your thing:

"Too many options it's a problem for chris
Mix Trix with Cookie Crisp cause I'm a scientist
My mind's on the prize at the bottom of the box
Fetch me the funnies I like Fox Trot a lot
Bloom County, Far Side, Charlie Brown if I'm down
sleeping bag on the sofa, watchin Bozo the Clown
I'm watching Gummy Bears and the Rescue Rangers
Darkwing Duck cause I love me some danger
Transformers, G.I. Joe, cause I love me some lasers
Wash my dishes won't leave it for later"

Parents will appreciate the advice chris doles out to young listeners on songs like "Halloween," where he explains that not brushing your teeth leads to something far scarier than ghosts and goblins - a trip to the dentist to fill your cavities. Kids will appreciate "Mac and Cheese and Cut Up Hot Dogs," a sincere ode to something that even adults will admit to craving from time to time. The only problems with "Marshmellow Playground," if indeed you can call them a problem, are that you don't get a lot of value if you buy the album as a whole (buying the actual songs individually saves you $4) and that the album is so dedicated to being wholesome that it doesn't have the often times bawdy and cynical wit of more familiar mc chris hits. The good news though is that the next time his young fans show up at a concert, he'll have some age appropriate music to perform, and an album their parents can buy without fear. I have to rate the album for the replay value of adults like me, but if I had kids I could see them enjoying this one repeatedly.