Brother Ali :: Mourning in America and Dreaming in Color 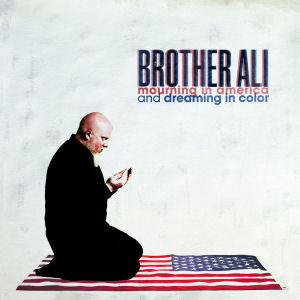 After a three-year hiatus from recording, Brother Ali, America's best legally blind Muslim albino rapper, is back with a new album. The cover of the record shows him doing an Islamic prayer using the American flag as a prayer rug. It is a provocative image, but Ali isn't doing it to rile the right-wing talk radio crowd. He means the image literally: he's praying for this country. The last three years, described in detail on "Stop the Presses," saw Ali touring the world, putting on weight, having two DJs quit on him, losing his father and a close friend, and traveling to Mecca, the Islamic holy land. His trip to Mecca helped him reaffirm his faith, and he came back itching to get into the studio. His go-to producer Ant was on tour with Atmosphere, so Ali hooked up with Jake One to make "Mourning in America."

The opening track, "Letter to My Countrymen," sets the tone of the album. The beat starts off with a menacing guitar line that is then lightened up by a xylophone and singing. It's both heavy and uplifting, which is the the mood that Ali hits for much of the album. Ali acknowledges the trouble in the world while staying optimistic about our ability to overcome. "I used to think I hated this place," he raps. "Couldn't wait to tell the President straight to his face. But lately I've changed/nowadays I embrace it all/The beautiful ideals and amazing flaws...I want to make this country what it says it is." He also tackles America's uncomfortable relationship with race, owning up to his own white privilege.

"We don't really like to talk about the race thing
The whole grandparents used to own slaves thing
Pat ourselves on the back in February
Looking at pictures of Abe Lincoln and the great King
But the real picture is much more embarrassing
[...]
What does it mean to be American?
I think the struggle to be free is our inheritance
And if we say it how it really is
Our lily skin still give us privileges
Advantages given to the few
Who are built into the roots of our biggest institutions
That's the truth and in life we got to choose
Do I fight in the movement or do I think I'm entitled to it?"

He delves further into this theme on "Won More Hit," in which he raps about how whites have celebrated African-American music while still oppressing and disrespecting the musicians. Ali is at his fieriest on the title track, rapping about the wars overseas and the wars at home.

What Brother Ali brings to hip-hop is a one-two punch of pure rap skills combined with a wisdom and intelligence that is rare to find anywhere, let alone popular music. He may be a white muslim, but he raps like an African-American Baptist minister, and has the compassion and sense of interconnectedness of a Buddhist monk. This is clearest on "All You Need," in which he describes his ex-wife's neglect of their son precipitated their divorce. Most people would be content to call her a terrible person and be done with it, but Ali explains to his son:

"I know you wonder why your mother does the things that she do
It's not because she doesn't love you
It's because she grew up in something they call foster care
That's when strangers raise you, your mom's not there
Imagine how she felt when she was your age
Going place to place never feeling safe
Never having love, she probably felt the world was a big scary place"

It's hard to be spiritual and positive without being corny, but Ali only approaches corniness a few times on the album. "I Need A Knot" repeats a stunt where he describes a job that sounds illegal but ends up being benign. The song would be terrible in the hands of a less talented rapper, but Ali manages to make it work. He drops a few platitudes on album-closer "Singing This Song," but there is enough heartfelt sentiment to compensate for his few Oprah-worthy moments.

The only track on the album that I wasn't feeling was "Fajr," which lost me with its combination of melodramatic beat and apocalyptic imagery. It's the only time on the album when Jake One fails to deliver. Throughout the rest of the disc his combination of soulful samples and booming drums are a perfect compliment to Ali's rhymes. It's fair to say that Jake One has one of the nicest drum sounds of any producer in hip-hop, and his beats add a lot to the album.

Ali's last album, 2009's "Us," was all about togetherness and unity. With "Mourning In America," Ali sounds like a man whose faith has been tested time and time again. He hasn't given up on his quest for righteousness, but he is less naively optimistic about achieving it. On "Work Everyday" he addresses the current economic crisis. Ali raps about the struggles of working Americans and questions why so many poor people end up conservative. "They seduce you with a little wealth," he explains. "If say you can have some crumbs for yourself/If the government doesn't help anyone else."

Even at his most angry, like on the title track and "Say Amen," Ali always keeps an eye on rising above and finding a better way to live. This is what makes him such a great rapper. He has the fire of a fighter but the wisdom of a religious leader in the body of a white man who sounds like a black man. Ali is a mess of contradictions, but his latest effort proves how well those contradictions work together. "Mourning In America" is another amazing album by Ali, hip-hop's best street preacher.