:: Think It's a Game Entertainment
as reviewed by Emanuel Wallace 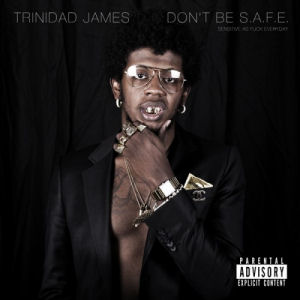 For all intents and purposes, I'm sure that Nicholas Williams is a nice guy. However, his on-stage persona, Trinidad James, makes some people feel a certain way about him and the current state of hip-hop music. The jokes have been plentiful and have spared no mercy on the Trinidad & Tobago-born and Atlanta-raised rapper who has been said to look like everything from a cross between Jimi Hendrix and Master P to the Jerome character from the 90s sitcom, Martin. James is getting the last laugh though, all the way to the bank, as he has reportedly inked a deal with Def Jam to the tune of two million dollars off the strength of the buzz created by his single "All Gold Everything" and subsequent mixtape, "Don't Be S.A.F.E." Not bad for someone who will readily admit that he just started rapping barely a year ago.

So what's the fuss about? "Don't Be S.A.F.E." (the acronym stands for Sensitive As Fuck Everyday) can't possibly be any worse than other projects that are polluting the airwaves and taking up precious hard drive space as part of the genre I like to refer to as "Recycle Bin Rap." Stop reading right now if you're interested in thought-provoking witty wordplay and the like, you're not going to find that here. What you will find is exceptional production and a personality that seems to be compelling enough to hold your attention...at least for a moment.

"Don't Be S.A.F.E." opens up with the braggadocious "Tonk For The Money" and "Females Welcomed." The latter is the tale of James swapping out the women in his life after falling out of favor with his "main bitch." At the start of the sparsely-produced and lush-sounding "Gold On My Macbook," James admits to surprising himself with the project while feeling amazing about it all. The old adage of "what happens in Vegas, stays in Vegas" is explored on "Team Vacation" as James and the crew shine bright like Vegas lights at a Vegas fight on a Vegas night. Smoking kush, popping mollies and having their way with other men's girlfriends are all viable options. Speaking of rap music's new apparent drug of choice, "One More Molly" all but confirms that James and company love doing drugs and aren't ones to skimp when it's time to have some fun.

For months, social media has been filled to the point of ad nauseum with the phrase "Popped a molly, I'm sweatin... woo!" Sometimes the "Woo!" is left out or someone comes up with a completely different and clever substitute such as "Popped a tamale." In any case, the line comes from "All Gold Everything," the single and video that began all the Trinidad James fanfare (and criticism). The beat rolls along slowly, truly sounding like something out of Goldeneye 007, a game for the Nintendo 64 console. Hours of deathmatch fun. Back to to "All Gold Everything." As James puts it, winners wear gold and you should never strive for second place. The song is quite addictive in its simplicity. The video has spawned several parodies, including the hilarious "No Gold Anything" by Belizean James and "All Rolls Everything" which features a necklace of chicken nuggets.

The project closes with songs like "Madden On Gamecube" and "$outh$ide," but not before the excellent "Givin No Fucks." With a spoken intro, James explains how "perfectly terrible" his life is and how the word "perfect" is among his favorites. Strictly taking aim at all of the "fuck niggas," James raps:

"So I stop searching for love, and kept smoking this loud
Cause I thought when you this high, that you couldn't feel this down
I was wrong again (these hoes are ridiculous)
I was wrong again (real ridiculous)
Niggas gon' hear this song and probably think I'm going in (them niggas lame too)
But if you a real nigga, and you think that you know me
And you say that you my homie, then you shouldn't have to worry
Cause this song for them fuck niggas, and niggas who I don't fuck with
Now you wonder who he talkin bout
If you had to wonder, then the shoe fits
[...]
The best part about being me, is I ain't nothing like you
And if you were me then you probably wouldn't like you
The best part about life man, just should be living it
But everytime I try man, I just keep getting into shit"

The "perfectly terrible" line is perhaps the best way to describe this project. The production fits well in the canon of what Trinidad James is all about. Rap music needs a bit of balance and for every Trinidad James out there, you can also find your lyrical heavyweights. A word to the wise would be just to not look for that from James any time soon. As with most things, the experience here wasn't as bad as some people have made it out to be. While not as addictive as crack or as damaging as meth, Trinidad James is a drug you might find yourself indulging in from time to time, just because but nothing more than that. Woo!