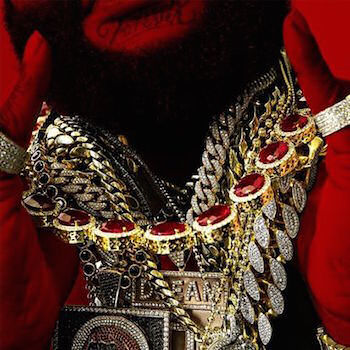 Listening to the intro of "Hood Billionaire" you'd think that Maybach Music's familia was out in the middle of the desert surrounding Albuquerque, "Breaking Bad" style. Pick-axes or shovels are digging their way to well concealed stashes of money, which presumably are buried due to the money being earned illegally, which you'd also have to believe was too much money to be laundered by traditional means - one of the recurring problems that Walter White (Heisenberg) has. The protagonists (or perhaps villains) state matter of factly they're digging up "fo' bags - eight million a bag" - meaning over thirty million dollars is just a few shovel loads of hard work away.

Songs like the Metro Boomin produced "Neighborhood Drug Dealer" outline the ways in which the fictional version of Rick Ross got his millions. You certainly couldn't bury thirty-two million and change underneath the ground if all you did was work 9 to 5 as a corrections officer. I keed, I keed. To be honest I respect Rick Ross' hustle and always have. The Mississippi born, Carol City raised rapper parlayed being an affiliate of Trick Daddy to hip-hop superstardom which has arguably eclipsed Mr. Dollars (nuff respect to him though). He's put in the leg work, and his fiction is certainly an entertaining one, spun out with his trademark grunts and groans for emphasis. Even his haters have to admit that between his mixtapes and retail albums, Ross works hard. This is his second "official" album of 2014, a follow-up to "Mastermind" released the first week of March.

Back to "Hood Billionaire" though - Ross as always relies on a little help from his friends to get by, and there are no shortage of them to return all the favors he does with cameos and guest verses. Yo Gotti drops in for the slick soul singing backdrop of "Trap Luv," the laconic Long Beach lah lah smokin' Snoop Dogg is on the funky slow riding DJ Toomp laced "Quintessential," Memphis' own Project Pat goes cruising with Maybach Music down "Elvis Presley Blvd." and the now unhyphenated Jay Z gets the Timbaland treatment on "Movin' Bass" - and these are just a few of the ten features found on "Hood Billionaire" (slightly less if you didn't get the deluxe version). Peep Ricky's story on the latter:

"Fallin from the sky, the money bags are bigger
Angels tatted all on me, pray for a lost sinner
Rolls Royce Corniche, sweepin me off my feet
New bitches they buy the fleet and we do 'em all by the week
Taz Angels just wanna chill, jewelers just wanna meet
Weed man expensive, three trips a week
Misses just wanna freak, feds stay up the street
Know they tailin us close so we leak what we wanna leak"

If you are familiar with the half-dozen previous official albums and many more unofficial ones, this is the exact same Rick Ross you've come to know and either love or hate. He certainly does have a flair for telling tales of criminal enterprise that would make Tony Montana envious. "I think a nigga phone tapped/they wanna give me time for my old raps/indict me for my own raps" vows Ross, even though his non-fictional legal problems are certainly enough to keep him busy. If it was a novel though Rick Ross would be a hard book to put down - much like Mario Puzo's "Godfather" epic. Could you make a movie out of the tales Ross tells? Probably. He doesn't just narrate the crimes and the bad times though - on tracks like "Keep Doin' That" with R. Kelly he's living it up with a "rich bitch" who can "suck a good dick." Good news for the penny-pinchers - you won't need the deluxe to get "Brimstone" featuring Big K.R.I.T., who is currently one of the hottest commodities in hip-hop - hotter than Rick Ross in fact. K.R.I.T. produces the track himself and lends it a flair that makes it sound like Organized Noise, which seems to suit Ross' "money on my mind, alcohol on my breath" flow ideally. It's the kind of partnership that makes Ross come across better than he technically is. Some people get by with a little help from their friends, Ross gets by with more than a little. Yes he does have a natural charm and charisma, yes he does spin his drug dealing yarns well, but the fact is that the story doesn't change very much from one album to the next. It's the beats, the cameos and the sheer momentum of Maybach Music that propels "Hood Billionaire" forward. What happens though when a rival gang comes and digs up all of Rozay's money though? Will he go out in a blaze of glory like Heisenberg? We'll have to wait and see what the next chapter of his crime saga brings.