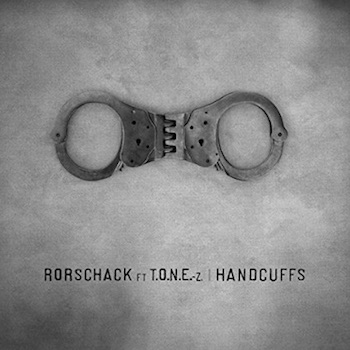 Cross-pollinating musical genres is nothing new. The most frequent kind is elements of hip-hop being combined with rock music, which works so long as the lead singer can actually rap. Merging hip-hop with r&b music also works and has a large crossover appeal. Combining it with electronic dance music (EDM) is scant, but I believe that's mostly because of production. Overblown and minimalist productions can overshadow the rapper, regardless of how good he or she may be on the mic. Finding a middle ground is key, and "Handcuffs" is almost there, but falls short.

Scheduled to be released early next month, "Handcuffs" is the brain child of Israeli producer Rorschack and rapper T.O.N.E.-z. The album seems to be the length of an extended play, but I suppose we'll know if it'll be an actual LP around the time of the release date. But for now, I'm working with what's available. Of the six tracks available for downloading and listening to, only one is a full-on instrumental. Lyrically speaking, T.O.N.E.-z's topics range from women to battle lyrics here.

The first two tracks, "Bartab" and "Handcuffs", deal with meeting women and the roadblocks that most men face, to one extent or another, when attempting to make an approach. For me, his spit-game was most appealing when he's spitting battle lyrics. He takes aim at his competition on "God MC", but the better (and best out of the six) is "Hifi Hafla". He demonstrates good breath control, a penchant for word association, and internal rhyme schemes:

"Everybody wanna see a nigga rap quick
I'ma hit 'em with a lyrical miracle, make 'em all flip
So easy, that I do it with no pen and a pad
I just spit it, you hear it and folds spirit"

One of the best aspects of this track was Rorschack's incorporation of Middle Eastern elements into his beats, along with the melodic chanting and drum snares. The final track, "Naked She Was", also does the same. Rorschack makes use of a Middle Eastern mandolin and combines it with the kind of synth changes and drum programming you can expect from a trap music-style of record. This track was the instrumental I mentioned earlier.

Overall, the album doesn't do much for this listener. Though some of the lyrics are nice and the production takes few varying turns, it still remains in its lane. The length of the album is also a contributing factor. Perhaps if there was more to go on, it wouldn't feel as lackluster. Like I said in the beginning: It's almost there, but falls short.