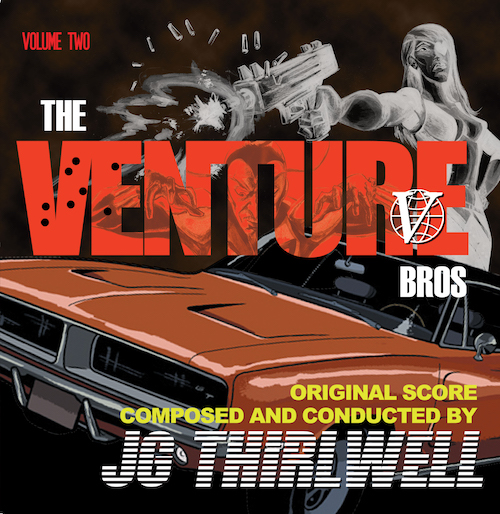 One could if they wanted sum up the Venture Bros. series on [adult swim] as "a parody of the 1960's cartoon Jonny Quest" and leave it at that. One could - but one shouldn't. Even if the source material and inspiration came from Quest, the series has reveled in sending up all manner of comic book superheros, spy movie supervillains and secret agent trops over the years. Each fictional organization that comes along is more absurd and their relationship with each other more inscrutable -- the Office of Secret Intelligence (OSI), The Guild of Calamitous Intent, S.P.H.I.N.X. and The Doom Factory just to name a few. It's perhaps fitting that the late avant garde music icon David Bowie, voiced not by himself but James Urbaniak, was a super villain on Venture Bros. - it's just that kind of show. My personal favorite voice actor on the whole show is Patrick Warburton - he brings just the right level of over-the-top insanity to the muscle bound blonde-haired agent Brock Samson.

I think it's clear at this point I enjoy the show, and one of the many reasons I'm fond of it is the music of James George "J.G." Thirwell. Perhaps David Bowie became an arch-villain in the show simply because it would have required too much chutzpah to cast the show's musical composer, but he certainly displays a talent for subterfuge and disguise that even The Sovereign would envy. If I took the time to talk strictly about Thirwell's alter egos and side projects it would take up the rest of the review, so let's cut to the chase and say his best known may be Foetus. He's had a very eclectic and inventive career, and like the aforementioned Ziggy Stardust he's never been one to be held to one musical style. His ability to tap into any genre and make it his own breathes life into the scenes of the Venture Bros. show, giving it a score to rival your favorite Hollywood blockbuster films.

With "Music of the Venture Bros. Volume Two" Thirwell continues to show the same passion for providing a musical method to the masterfully madcap mishaps of the Venture clan. The tracks range from whimsical to deadly serious and hair raising, but the real treat is getting to experience them without the excellent voice cast talking over it and unintentionally reducing it to background noise. Tracks like "The Chosen March" come to the fore here, as good a send-up of a patriotic parade route tune as you're likely to hear, both loving tribute and tongue in cheek riff on composers like John Philip Sousa. "Optimistic Space Travel" shines too with it's overly enthusiastic "zoom zoom zoom" singers and the feel of a campy 1960's classroom science film, which coincidentally is how it comes across on the TV show too when discussing the scientific advancements of the ORIGINAL Dr. Venture. You can hear it in the background below at the 31 second mark -- I was looking for a longer clip but they're hard to find (probably to keep the home video and digital distribution sales up).

If you're asking "How does this all fit into hip-hop?" well I'd have to argue that any emcee worth his salt would want to rap over the slinky funk of "Scenester" on this soundtrack, and it's far from the first all-instrumental album we've reviewed on this website. Some of it simply stands alone without need or want of any accompanying vocals whether actors or rappers. "Hank Goes It Alone" has just the right level of dark piano keys, high tempo percussion and zany xylophonic melody to create the feeling of both danger and excitement that Venture Bros. takes to insane and routinely hilarious heights. That's another reason J.G. Thirlwell is the man best suited to score this show - among the many names his Foetus alias has been resculpted under the potentially offensive "Scraping Foetus Off the Wheel" and "You've Got Foetus On Your Breath" top the list. The wrong personality type will take both horribly wrong, and the right will recognize that it's so far over the top it that seeing people take umbrage only makes it even funnier. It's pretty much the same reaction I have any time some Christian conservative group complains for the ten millionth time about how offensive South Park is. I'd have to imagine their list of complaints about Venture Bros. would be just as long if it weren't purposefully part of a late night TV block MEANT for adults. I still can't help but wish there was a rap version of "Volume Two" that had MF DOOM rapping over "Battlestations" and J. Cole spitting on "Ready For Takeoff" but I can say that just like the previous volume J.G. Thirlwell's music stands on its own. If you're a fan of the show the soundtrack is a must have and if you're not listening to it will make you want to watch to see how the score fits in to the action.