:: Sleep 513/The Fraternity
as reviewed by Steve 'Flash' Juon 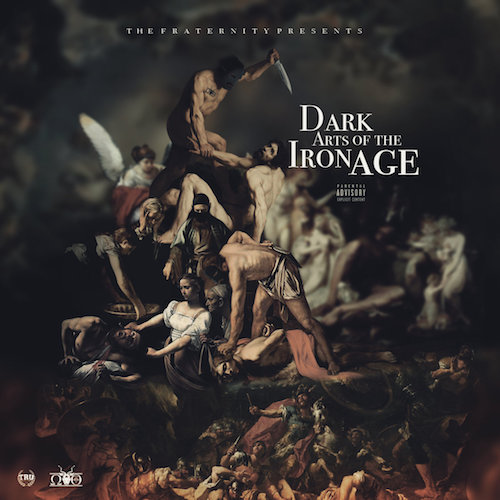 After having several solo albums reveiewed throughout the last decade, Orange County rapper Loose Logic revealed a new facet of his persona by reaching out to us with The Fraternity's "Dark Arts of the Iron Age." I didn't picture Logic as a "rolling with a crew" emcee before now -- he seemed perfectly content to ride hard solo and take whatever success or failure that would come along with it. Mind you that's not a trait unique to Logic. Anybody who records and/or performs on their lives and dies by that sword. The "Iron Age" was one all about that sword as well, as larger societies and communities formed that could both support and consume the new products that came from blast furances capable of purifying iron. Obviously weapons of warfare were a strong component of that, but for the wealthy items made of iron were renowned for their durability and symbolized the prestige of being able to afford something that would last over the long haul. Sayings like "iron sharpens iron" have been passed down over the ages to point out the strength that iron personifies.

The Fraternity is Logic's previously unseen crew, who for the life of me I can't remember him mentioning or promoting before, but their "Dark Arts" album clearly means to invoke those ancient times (ranging from 1200-600 BC by a Judeo-Christian calendar) that are to some degree recorded and understood by the very iron artifacts they left behind that survived to modern times. Written tablets could be broken, papyrus scrolls could weather, crack and crumble, but well forged iron could endure (and poorly made/kept could rust) for centuries. There's a clear mysticism implied by the name of the album as well, and a hint of the conspiracy theories of those who believe that "ancient technology" from "ancient aliens" explains humanity's seemingly rapid progress from the stone age to modern civilizations around that time. Some of that same vibe can be heard on "Sunken Place" with its haunting background melody and repeated references to the Illuminati and mind control.

"Go learn that novus ordo seclorum is the message" quips the crew, a Latin phrase meaning "new order of the ages" often misunderstood by conspiracy theorists to mean "new world order." That's what we're working with for Logic's homies in The Fraternity. There's an inherent mistrust of modern day society, figures of authority, and what I would call a generally dark and forboding vibe. The same has been heard from Wu-Tang Clan affiliates over the years like Killarmy, but it's not often the hallmark of a California hip-hop collective. There's no doubt that The Fraternity would read books like William Cooper's "Behold a Pale Horse

" though, and you'll hear references to "Area 51" and "faking the moon landing" on tracks like "The Owl" with sarcastic bars like "pray to whoever you think can save you and remember The Fraternity hates you." Logic was a hard rapper on his own, one I would compare to other soloists with a rough around the edges attitude like Madchild and Slaine, but his homies are more like Non Phixion. That's fine. Every now and then hip-hop needs a dark group with dark foreboding raps, and with POTUS 45 on high in Washington, these certainly feel like the New World Order and Illuminati times so many rappers have prophesized. Of course if you predict enough s--t over a long enough period of time you're eventually bound to get at least one or two things right (see Nostradamus) by dumb luck if nothing else. Still it's not all as bleak as this review might at first intimate - The Fraternity still lace their raps with punchlines and double entendres like "Burn at the Steak." One thing is for sure - neither Sleep TF, Jus Ra, Cain, X. Medina or Loose Logic (the principal members of this crew) are playing around on "Iron Age of the Dark Arts." They may have a few jokes just to keep things moving along and not totally bog you down in how grim they are, but there's little question this is a serious album for people who like their beats and rhymes colored blood red and ominous. Let me put it to you this way - if you like Jedi Mind Tricks or the Vinnie Paz solo albums you'll probably like The Fraternity too. They're not AS good as either of those but this hour long album fits comfortably into the same wheelhouse.