Down South :: Lost in Brooklyn

:: Big Beat/Atlantic
** RapReviews "Back to the Lab" series **
as reviewed by Matt Jost 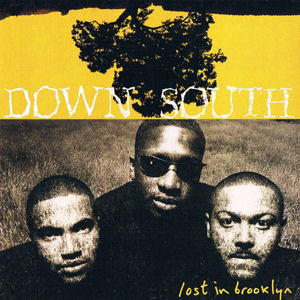 Rap records are often very typical of their time (and anything but 'timeless'). It's hard to imagine Down South's "Lost in Brooklyn" being released after 1994. Here we have a group embracing everything southern, and where are they from? VA. Virginia may be 'down south' from a New Yorker perspective and it may be below the Mason-Dixon line, but it finds itself 'up north' relative to the Carolinas, Georgia, Florida, Alabama, Mississippi or Louisiana. States that in the years to come would produce national rap stars such as JT Money, Petey Pablo, Pastor Troy, Juvenile, Bubba Sparxxx, etc. Their way was paved by a number of labels and artists, many of whom would also be part of the growing southern scene that rendered a concept act like Down South obsolete by 1995.

Still in '94 Down South had every right to exist as they presented a rural, southern alternative to the urban, northern way of life, both on a social and a musical level. To stress that Arrested Development beat them to it by two years would be failing to realize that Down South solely exist within that dichotomy. They purposely hit their heads against the New York city walls, in place of every out-of-towner who ever tried to make it there. "Lost in Brooklyn" is not only a symbol of the hegemony of the birthplace of hip-hop, it also implicitly represents the adventurous journey of generations of southern migrants/refugees/runaways who settled in the northern and eastern cities. Down South directly address those with family in the south, plus allude to having family further down south themselves (although no geographical denominations are given).

Down South's most prominent member is Shawn J-Period (not to be confused with DJ J.Period or with Shawn J of Field Mob), who would go on to produce for Mad Skillz, Bush Babees, Artifacts and become one of the architects of the Rawkus sound. Since him and partner Soda Pop share the same family name, we can assume they were blood-related (AllMusic says cousins). They could also originate from the same place (Richmond), including Myorr the DJ, whose family apparently accomodated the trio during its stay(s) in New York.

Although the tape and vinyl versions of the album are divided into a South and a North Side, there is no sudden change of the narrative point of view. Things kick off with the self-titled "Down South," produced by South Carolina transplant T-Ray, the opening steel guitar sample soon making way for a dense Soul Assassins-type track. "Here come the hicks!" they chant, before staging some sort of barbarian invasion with violent imagery straight out of a backwoods horror movie. When Soda Pop argues, "Because the vibe down here is real / Take you five miles out, you'll forget that from-the-hood deal," he also throws down the gauntlet to the urban warrior who usually characterizes rap music. "Now you know country [niggas] ain't all about pickin' cotton," he concludes.

Nevertheless they have to employ stereotypes, and they go all the way on "Southern Comfort." A perfect J-Period/Stretch Armstrong co-production, the track paints a landscape of pure bliss over which a siren saxophone beckons you home. Shawn J-Period heeds the call:

"It's time for me to go just below the Mason-Dixon
I heard through the grapevine my grandmother's fixin'
some vittles, for me to come down for a little
if I take up some of these sweet candied yams
Damn, remember how the grass starts itchin'
and itchin', you fall into your grandma's kitchen
Had to wash your hands before you ate some
Stove Top stuffing and collard greens on your plate
Oh what about the buttered cornbread?
She wouldn't sit down to eat till the whole neighborhood was fed
The hospitality that I savour
Wanna make some Kool-Aid? Kid, get a cup of sugar from your neighbor
No quibbles and qualms, ring the alarm
In the evening relaxin' in my grandma's arms
Just a boy, but now I'm a man on the run
Step off bro, I'm baskin' in the sun
of the southern comfort"

T-Ray returns to the boards for "Tractors, Rakes, and Hoes" (the title inspired by Black Sheep, another group with an affinity for the country life), which continues Soda Pop's allegorical language from "Southern Comfort" while making digs at the fair sex. The lyrical approach gets out of hand on "Jimi Crack Korn," a pop culture-laden back-and-forth that ignores the historical context of the original song. "Spin Da Boddle" is the same thing in cypher form.

And then it's finally time for the title track. The Beatnuts provide a tongue-in-cheek jeep beat while Myorr digs up an old piece of wax from Bed-Stuy's own DisMasters for scratched in vocals. Shawn and Soda star as the gullible hayseeds who get taken advantage of in the big city. After nothing but mishaps it seems they are in a hurry to get back to the south, or more poetically put by Shawn - "It's the Down South flock flyin' south for the winter." "Sitting Here" catches these migratory birds resting, and as they fall asleep, their dreams take them back to their childhood once again on "Big Wheels."

The Beatnuts and Stretch Armstrong again blend in nicely with "Around the Clock" and "Open Sesame" and the Soda Pop solo "The Carbonated One," respectively. Mainly because they observe the number one house rule of this album - there's gotta be at least one horn in every track. When it comes to horns and hip-hop, "Lost in Brooklyn" is the album to beat, and while they're not all mind-blowing, they shape the sound of the album and edge out any other musical regional pointers such as 'East Coast' or 'Down South.'

Still Down South prove that Virginia possesses a little bit of both. While they weren't the only VA representatives trying to be a part of East Coast hip-hop in the '90s (Mad Skillz and Ill Biskits come to mind), it wasn't long before Missy Elliott and Timbaland put the state on the map for good with their highly original combination of urban and rural. Meanwhile Down South struggle to compete with similar groups like The Beatnuts or Tha Alkaholiks. But as a historical document of rap exploring black people's southern roots, "Lost in Brooklyn" is certainly an interesting item. As Shawn J-Period puts it: "We'll never forget the southern folks are the source that raised us and provided us - with just a hint of southern twang in my vocal thang."