:: Wordplay
** RapReviews "Back to the Lab" series **
as reviewed by Matt Jost 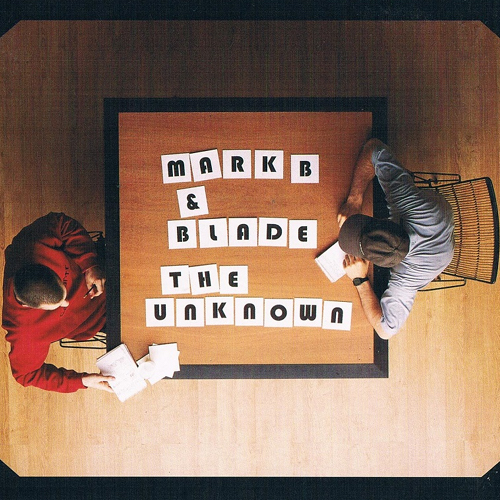 During the 1990s, British rapper Blade was among the few who kept hip-hop alive in a country that couldn't seem to forget the golden days of rock, reincarnated almost weekly in new young bands hailed by the music press. As the music scene additionally divided its attention between innovative formats and tried and true formulas, hip-hop somehow fell through the cracks, at least commercially. Domestic hip-hop artists had virtually no chance to establish a sustainable business model amidst Britpop, trip-hop, acid jazz, drum 'n bass, breakbeat, big beat, bhangra, boybands and the Spice Girls.

By the end of the decade Blade's state of mind was torn between hope and frustration. Normally a lone wolf, he had teamed up with up-and-coming beatmaker and cratedigger Mark B for a single and EP in 1998. But it is their 2000 full-length "The Unknown" that stands as a unique release that embodies the potential and the crux of UK hip-hop. Still nursing a heavy grudge against the music industry, the veteran MC mustered all the optimism he possibly could to present Mark B & Blade as a winning team. The album is chock-full of confident statements and arguments as to why hard work and true talent will triumph over the flashy ways of the music biz. In detail Blade tells of their plans to advance into enemy territory. At times their strategy has a martial undertone, but overall they hope to get there with the aforementioned virtues:

"We gain critical acclaim, critics are tamed
Aware of our names, we return to re-ignite the flames
Recordings are delivered on schedule
The album is completed and original
Now all that remains are the dates to be confirmed
The press to be informed because it's critical
Ads in magazines that could spark off our dreams
We're keen to be heard by any and all fiends
For rap beats, taken from backstreets
And brought to the forefront to stand face to face with the elite
The heat uncontrollable, too hot to handle
The record a demonstration of skills that cause scandals
The media tracking us every step of the way
There's a time to be serious, a time to play"

Sounds like a plan. Rappers are known to be ambitious, but few have ever laid out their plans across album length like Blade does on "The Unknown," whether he devises a fictional scenario like the stealthy radio invasion "Hostile Takeover," or reconsiders his lyrical approach on "24 Hours":

"When you throw a pebble in the river the ripples expand
I must develop a style they understand
Not too difficult, or scientifical
And not too typical, but still lyrical
So I can maintain respect on a street level
The world's the river and my words the pebbles"

Combined with Mark B's bare-bone, 70's basslines-driven beats this results in a number of convincing manifestos from the perspective of the underdog who knows he has the potential to join the top dogs. "From the Wordlab" is a bulletproof opening, Mark looping a funky horn, backing it with soft drums intertwined with the subtlest of harpsichord sounds, before introducing jubilant flutes in the chorus. Lyrically, Blade gets right to the heart of the matter. The song begins with the unforgettable bottomline "While you party your ass off we work our ass off / to give you something to party to - take your hats off."

While the rest of the album lacks such sophisticated rhetoric (at least the sentiment returns prominently as the song's chorus), the rapper who once counted himself among the hardest working crafts solid scenarios that suggest that hard and honest work pays off. If that sounds slightly passive on their part, Blade just as well knows how to have his way, as evidenced by the duo's most famous tune, "Ya Don't See the Signs." Mark B sets him up with a hip-hop-meets-western track, triggers the gunshot sound effect and Blade is off riding the bucking horse of a beat with spunk, giving one of the most focused performances of his career. Grant Nicholas of Welsh rock group Feeder remixed the track for the new year, the crossover compound reaching number 23 on the singles charts. One version of the album then entered the album charts in the summer of 2001, whether it was the original release or the one that included the remix and three more bonus tracks can no longer be made out. Those potential album buyers attracted by the rock remix (which secured Mark B & Blade a slot on the popular Top of the Pops chart show) but winding up with the first edition, still got a certified UK classic, a flawless production that combines the DJ Premier school with a cinematic scope and features 84 seconds of uninterrupted scratching, hefty rhymes and a strong flow that represent that timeless attitude of a rapper who has something to say. It was rare in these days in any place in the world to witness a longstanding MC in the public sphere, but for a brief moment, Blade was close to completing the impossible mission: "Stand back and watch a professional rapper rhyme / Put the mic down, boy, the show is mine."

Taking up the idea behind "The Unknown" - that great hip-hop (or great music in general) is sometimes right under your nose (without you noticing it) - "Ya Don't See the Signs" aims to change that in four minutes, starting with the basic finding that Mark B & Blade have a disadvantage in entering the history books of hip-hop simply because they're British. "To hell with that prehistoric thinking!" Blade declares dismissively, and even though the song dwells a bit too long on battle rap standards, it doesn't lose sight of its purpose: "And as it goes you're the cons who've been acting as pros / One of these days you'll be exposed."

And so the two Londoners embark on their mission. They're joined by fellow UK hip-hop mainstays Rodney P (of London Posse, on the classic back-and-forth bragging-rights-excercizing "We Stay Rough") and Lewis Parker and Skinnyman ("The Long Awaited"), and last but not least accompagnied by accomplished DJ's Plus One, Mr Thing and Primecuts. Given the monothematic and musically narrowly defined nature of "The Unknown," variation is welcome. The title track features a gentle guitar and a haunting sampled voice while Blade offers a sobering view of the obstacles passionate musicians face. "Back in the Day" celebrates their carefree years in hip-hop, Blade remembering how he used to beatbox for early rap star MC Merlin. In turn, "Right Here Right Now" presents the duo as elders who pass on their knowledge to the benefit of the next generation. Other concepts are less convincing. "Split Personalities" with Beatnuts affiliate Al Tariq sees Mark B loosen up with a grooving horn section, but the song itself remains a rough draft. "One Shark One Piranha" thrives on its confident vibe while the uninspired "Bad Day" is a bad way to end such a focused album.

"The Unknown" is an important record in the annals of UK hip-hop, particularly because it was released in a time of drought. There were Roots Manuva's "Brand New Second Hand" (1999) and Skitz' "Countryman" (2001), but the Mark B & Blade album is, although musically a touch too much in tune with similar revivalist sound architechts (DJ Vadim, Nextmen, Unsung Heroes, DJ Format) and technically and thematically not the greatest rap presentation, the definite UK hip-hop release of its time. It was an artistic and commercial success that neither artist would be able to duplicate. "The Unknown" works exactly because it doesn't lose sight of the prize. Said prize ("We hope we'll go platinum - ain't nothing wrong with dreamin'") may seem unrealistic to pessimistic minds or those who helped streamline rap music towards the mainstream, but it becomes just a little bit more realistic because of the obvious experience that is involved and the seriousness behind it. Mark B and Blade did what few ever really do. They put their money where their mouth is. They said, "It's time to unleash our capabilities" and promised, "This album will be known for settin' standards / sellin' cause we're good, not cause we're payin' backhanders." When Blade recalls his b-boying days and how local crowds "witnessed the performance of a lifetime," then "The Unknown" was a modern day attempt to convey that noble ambition to deliver something spectacular.

On the first day of 2016 Mark Barnes unexpectedly passed away, and the year should not go by without those who already know or want to get to know "The Unknown" commemorating his legacy without giving it a spin.