:: Murdertone/EMI
** RapReviews "Back to the Lab" series **
as reviewed by Matt Jost 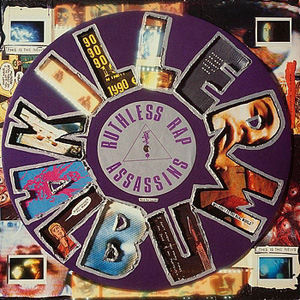 When we're looking at the demographic that simply does not get rap and fails to see what other people hear in rap, probably a substantial percentage has a hard time understanding how music (or perhaps even art in general) can be both serious and funny, flippant or frivolous at the same time.

These people may be familiar with the specific dichotomy itself (through any type of comedy that isn't completely lowbrow, for instance), but they don't want to hear it in music, because they're not used to hearing it there, or just naturally lean towards straightforward messages. Or, reversely, they're more comfortable with songs shrouded in irony, abstraction, vagueness, etc. And then there are always those that simply lack the mental capacity to process mixed messages. Obviously rap has accomplished performers on either side - those who followed Rakim's lead taken with "I Ain't No Joke" and those who put an extra emphasis on the latter part of Afrika Bambaataa's 'Peace, Unity, Love and Having Fun' credo. A more significant number, however, combines the dead serious and the tongue-in-cheek - often in one and the same song. That balancing act, to get listeners to laugh and to think simultaneously, is not easy to maintain. When they decided to call themselves Ruthless Rap Assassins in the wake of rap going hardcore in the '80s, these three Mancunians could have ended up either an unintentional parody or a comedy troupe. Instead, they released a debut album to wide critical acclaim and dropped one of their country's first socially relevant rap singles.

The "Killer Album" is in many ways a hip-hop album like no other. It originates out of Manchester, at the time in the music press dubbed Madchester, home to bands such as Happy Mondays and Stone Roses that mixed alternative and psychedelic rock with dance music. Its production overseen by longtime club DJ and electro producer Greg Wilson, the "Killer Album" does have a club/rave strain in its set-up. There's also a heap of old school rhyming straight out of the mid-'80s. It furthermore appears intent to capitalize on the sampling explosion of 1988 and 1989, maybe even posing as a successor to Public Enemy's "It Takes a Nation of Millions to Hold Us Back" and the Beastie Boys' "Paul's Boutique." Add to this mishmash the fact that the crew consisted of an MC calling himself Kermit Le Freak and two brothers with the confounding monikers Dangerous Hinds and Dangerous C, the latter with a 'DJ' in front, but also rapping, the former prominently providing vocals yet also employing the DJ alias Dangerous A...

The prospects weren't particularly good, but RRA smashed preconceptions with a rock 'n roll attitude that does indeed evoke PE and the Beasties. Although the Steppenwolf sample in "Go Wild!" inevitably jumps at you, it's ultimately just one explosive in the Assassins' "beat warfare." Quick to change their approach, the following track, single "Just Mellow" (advertised as 'the chiller from Killer') sees the trio offering "a break from the hardcore tracks" with an acoustic guitar groove and vocal soul sample. Only to rework the track in '91 with a remix called "Less Mellow"...

Contrast is a stylistic and rhetorical device repeatedly employed by the Assassins. Opener "Crew From the North" addresses a hip-hop audience mainly used to hearing from the London scene. Even as Kermit and Hinds hurl playground insults at competition and declare, "When we're on the mics we take the piss," they still mean business, concluding with "We're the Ruthless Rap Assassins and we are for real / and if you suckers can't hear, you suckers must feel."

Yet they can do all the rap stuff, the posing and the joking, they still know they can't escape reality. By track number two, the strong arm of the "Law of the Jungle" already has them in its iron lock. Over Ringo Starr's remarkably 'hip-hop' drums from "Sgt. Pepper's Lonely Hearts Club Band (Reprise)," they recite from Kipling's Jungle Book as Kermit readies his social critique:

"The arms race long since out of control
Too many children starving and cold
Diplomats talk but never solve shit
Their countries dying bit by bit
The TV beams the pictures all over the world
but the cries of anger are still not heard
Assassination, terrorism, war and crime
Why, it's all just a sign of the times
Live Aid, Sports Aid, whatever you like
It's only a band aid over human strife
It's time for your attitude to change
Time to realise that we're all to blame"

The broad accusations then make way for a more detailed look in the mirror, the lyrics even taking on a properly British tone with "Self-destruction is a fashionable trait / born out of boredom in a Thatcherite state." But no other song possessed the tangibility of "And it Wasn't a Dream," the aforementioned single. Unlike most other political rap tracks of the time, "And it Wasn't a Dream" didn't use the bullhorn to get its point across. And instead of detailing his generation's worries, Dangerous Hinds decided to talk about the parents, the West Indian immigrants of the '50s and '60s, who came to the United Kingdom with hopes high. Dedicating the first verse to the wife and the second to the husband, Hinds paints a compelling portrait of a disillusioned couple:

"When Dad was a lad he was baaad
But check him out now, it's kinda sad
He came here to England, he thought he'd do well
He knew more about the English than they knew 'bout themselves
Question him on Africa, he'd give you some crap
about the place across the sea where all the people are black
where they lived in grass houses, where they didn't wear clothes
where every last person had a bone through the nose
But what did he care, he was in the UK
where people co-existed in a civilised way
With this kind of thinking his brainwashed mind
couldn't cope, he lost hope and now he's lost and blind
Forget about the future, he's just living for now
He tried to succeed but he didn't know how
to deal with rejection at the sight of his face
All the isms and schisms concerning his race
He would stay here for ten or twenty years at the most
take his family home and live high post
When Daddy arrived that was his masterplan
His wife was the woman and he was the man
But life was so hard, it near destroyed their souls
Some couples went mad, some reversed their roles
Young, gifted and black, they were a perfect team
But now they can't go back, they lost it all for a dream"

Musically, "And it Wasn't a Dream" had all the makings of a hit, the lulling loop from Cymande's "The Message" providing a subtle Caribbean vibe while singer Tracey Carmen grooved in the background. Without crucial radio support, however, the single had no chance to climb up the charts once it briefly entered them. In typical Rap Assassins fashion, they reacted defiantly, releasing "Justice (Just Us)" as the next single. Clearly not aiming for airplay this time, the trio offered a bleak look at black Britain. The single mix courtesy of De La Soul's Maseo gave the album version a slight rock edge and toned down the booming drums but kept the sinister atmosphere and sharp scratches. On both tracks, Dangerous Hinds' bitter compendium of prejudices and disadvantages delivered in a stoic manner ring loud and clear. Finally, brothers Anderson and Carson Hinds act outspokenly militant on "That's My Nigger," an all around razor-sharp statement on race relations from the minority's point of view.

However, stinging social commentary is but one aspect of the "Killer Album." Long before there was the Madd Rapper, there was "Jealous MC," as running his mouth in the satirical song of the same name. The Coasters' rock 'n roll classic "Yakety Yak" may have been covered by plenty of bands, but it's doubtful any of them did it with so much proper punk attitude as the Rap Assassins. The battle rhymes and routines of tracks like "To the Other MC's" or "Three the Hard Way" may have been long dated by 1990, but they are clearly inspired by real live experience. And while Brit hop would soon get a little bit too serious for its own good, the trio combined brutal imagery with a playful attitude:

"If you're at a party and the MC's not swinging
Drag him off the mic, get a rope and hang him
But if you feel that hanging is a little severe
Don't let him get off lightly, let me make this quite clear
Get a hammer and some nails and nail him to the wall
And give him fifty lashes, no less no more
Then leave him on the wall as a endless reminder
that to the likes of him we won't be any kinder"

All three Rap Assassins could master solo tracks and at the same time perform together like only a real rap crew can. There was virtually no lead voice in RRA, as each one of these killers had a replacement. Some tracks are exuberant, overflowing with enthusiasm, while others possess a cutting-edge coldness. And last but definitely not least there is Greg Wilson's guiding hand, who creates a collage out of these many disparate elements by way of what the album credits call 'segueways, spins and slices' - short but highly effective go-betweens made up of movie quotes and other soundbites that turn the "Killer" into a real album with its very own identity.

"Killer" is one of those albums that make ordinary rap look kind of poor. It is that extraordinary. It's articulate as well as anarchistic, cool but not too cool, familiar yet different. It is the theory of hip-hop put into action - that you can create something totally fresh out of used goods and that physical poverty doesn't have to lead to impoverished minds. Kermit's, Carson's and Anderson's meeting point, the housing complex known as the Hulme Crescents, were torn down in the '90s, some years after the Rap Assassins were dropped from EMI and disbanded.

But the legend of the "Killer Album" lived on, inspiring the kind of fandom that led to the creation of a website like The North Hulme Sound and, in celebration of the release's 20th anniversary, a well deserved reissue on Cherry Red Records. Looking back on my own 20-year-long relationship with this album and a couple more with rap music as a whole, the Ruthless Rap Assassins represent in a nutshell what keeps my passion for the entire genre lit - diversity and originality. The combination of these two elements in a manner and to a degree you cannot reasonably expect from your average rap release is what elevates the "Killer Album" above so many others.