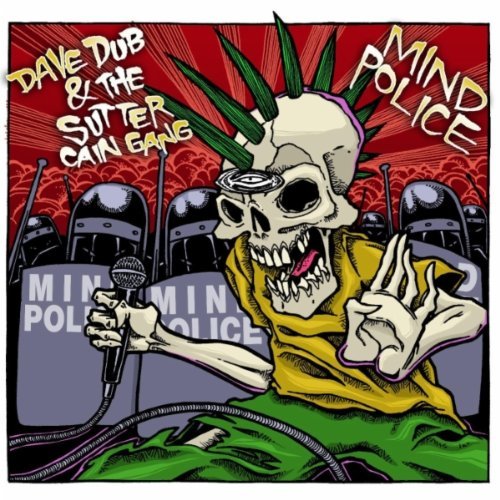 Sometimes one is tempted to start and end a review in one sentence and be done with it. It would be far more satisfying to the writer, but much less helpful to the reader hoping to glean insight into an album and artist. This is one of those cases, but this reviewer shall steadfastly soldier on and deliver the verbiage.

"Mind Police" is an album that can be experienced in under a half hour, and that's by design. Dave Dub & The Sutter Cain Gang did not record a single song here longer than three minutes and nine seconds, and half of them are actually 2:15 or less. The reason for these brief adrenaline bursts of music is simple - rapper Dub and his production team of JtheSarge and Piet Damolen envisioned this album as "a punk rock hip-hop project." One can't fault them for truth in advertising - that's exactly what "Mind Police" is. If you ever listened to a seminal punk album (that doesn't mean punk pop crossover like Green Day or No Doubt) it's exactly like this release - and not too far from what the early/obscure Beastie Boys songs sound like either.

Dub is the product of a California scene that encourages experimentation, both musically and pharmaceutically, and by his own admission he's done plenty of both since the 1990's. If you have Peanut Butter Wolf's "My Vinyl Weighs a Ton" you may know of him, but that was over a decade ago. He dropped so far off the radar he couldn't even be found with sonar. Like many troubled musicians, his once recreational excesses became full-time pursuits, and artistic output became secondary to staying comfortably numb. Confident he has now dealt with his demons and made peace with them, he has enlisted the help of JtheSarge, Myka 9 and their M9 Entertainment label to put his musical vision back on the map. Not surprisingly both J and 9 make cameos on "Mind Police" on the song "I Need It," one of the album's most intense (and also a bit incomprehensible) tracks.

As the old saying goes though let's get down to brass tacks, and they are particularly sharp and pointy here. I respect Dave Dub's commitment to make punk rock hip-hop his own way, and his label's commitment to supporting and producing it that way. Occasionally this results in songs that remind me a little bit of Ice-T's band Bodycount, most notably on the title track of "Mind Police" and the Cage-like "No Name." Having respect for an artist doesn't always mean enjoying their musical output though - see Camu Tao's "King of Hearts" for example. To be honest there's a very VERY narrow subset of today's rap audience that's going to appreciate songs like "Hitler's Nightmare" and "Robo Christ." If you like incredibly fast punk rock bass guitar and drums and someone with a relatively monotone vocal chord rapping just as fast over them "Mind Police" is your cup of tea. This writer finds the taste a little too acrid and bitter to enjoy the drink. There's a place for punk rock hip-hop in this world, and if you like early 1980's Beastie Boys, you're in that place. 30 minutes of it is more than enough for me.