Applejaxx :: Glow in the Dark EP :: Fadacy Music
as reviewed by Patrick Taylor 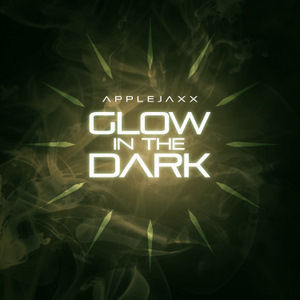 Christian rap is a dicey prospect. How do you approach music that takes pride in being as raunchy, vulgar, and hedonistic as possible and make it Christian? How do you put a Christian spin on music that is meant to make you shake your ass in the club? And how do you do Christian rap without being too corny or inauthentic?

One the negative end of the spectrum are artists like J.O.T. and Miss Crystal, who come off as corny, amateurish, and inauthentic. More often, the result of the mix between explicit Christianity and rap is something more along the lines of Carnival, who have solid musical chops but are still too feel-good and preachy for the non-Christian  rap crowd. The pinnacle of success are artists like Rhymefest who manage to address their faith openly in their music without coming off as preachy. North Carolina rapper Applejaxx is somewhere between Carnival and Rhymefest on the spectrum, and probably closer to the former than the latter.

This is the fourth project of his we've reviewed on RapReviews. Guido Stern was not a fan of his 2008 mixtape, "Databass." I thought his debut album "Back 2 the Future" was well-done but I was less inclined towards his follow up EP, "Jesus High").

"Glow in the Dark" is sonically and lyrically similar to "Jesus High," but whether it is the music or my mood, I'm feeling more generous towards it. Here's all you really need to know: Applejaxx makes Christian club rap. He's obviously influenced by Kanye West, but he's also influenced by Southern hip-hop that is no doubt on heavy rotation on the radio stations in his area. He works with competent producers to make crisp sounding approximations of music you might find yourself bumping and grinding to at a club filled with women in mini skirts and heels. Most of the lyrics celebrate his religion in general and Christ in particular, which means if you don't want to hear about God, you won't want to listen to "Glow in the Dark."

To quote the press release, "'Glow in the Dark' is a project themed around shining light in darkness. in the Gospel of John (8:12), Christ stated that, 'I am the light of the world. Whoever follows me will not walk in darkness, but will have the light of life.' Applejaxx explains, 'To glow in the dark one must follow Jesus by obeying his commandments. When you follow Christ, you are not ashamed to be a light in darkness. Christ calls us to be a light in this world, 'Glow in the Dark'."  I'm pretty sure that wasn't what Kanye had in mind when he named his tour the same thing.

To Applejaxx's credit, he's not judgemental or that preachy even, just really, really into God. He doesn't fall into the trap of telling other people how they should live (although he highly suggests you accept Jesus as your Lord and Savior), and instead uses his music to celebrate the path that he's chosen and that has worked for him. However, I wish there was more in his lyrics about how being a Christian translates into his life, beyond rapping about Christ.

But that's not the point of this album. The point is to use the hip-hop idiom to celebrate his faith, and Applejaxx does that pretty well. He's a capable if not amazing rapper, certainly on level with a lot of other secular rappers out there. The beats are solid, and the guest verses and singing by Ashleigh Nickole, Ferrari Ferris, Eddie Nigma, Mr. Coldstone, Trini, The Voice, Big Al, Je'kob, and Gibraan add some spice to the mix. They are all fairly talented rappers and singers, and all of them sound like they were musicians before they decided to channel their music to promote their beliefs.

While "Glow in the Dark" is not my cup of tea, I have to admit that it was done well. Applejaxx is good at heavily synthesized club rap, and his Biblical rhymes are a step above the standard mindless raunch typical of the genre.  I don't see this making huge waves among the unconverted, but Christan rap fans should snatch it up.