D-Sisive :: Run With The Creeps 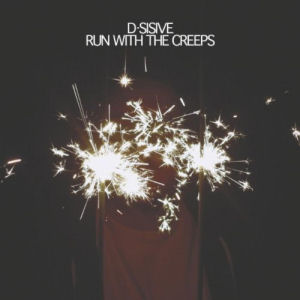 Reviews are not an easy thing to write. I'm not complaining about my job, but I'm just attempting to provide some insight into the process to help explain why reviews turn out the way they do sometimes. No review is harder to write than a review for an album or artist you really love. It's a difficult task for many reasons. The first reason is that you feel very passionate about the music you're writing about so you have to be careful not to get too emotional about it. I've had my fair share of reviews that unfortunately end up sounding like Stanish fan letters or diary entries. The second reason is that you feel an intense pressure to write something great that will get others to peep the music themselves. The danger here is laying the hyperbole on too thick, building expectations that no album could deliver, or worst of all sounding like a cheesy press kit in the form of a review. Finally, there is the pressure to say something that hasn't been said before.

In D-Sisive's case, the circumstances have converged to put me in quite a dilemma. After sleeping on D-Sisive despite two 9 out of 10 reviews from two different critics on this site, I finally peeped "Let the Children Die" and dropped my own 9 on that ass. Flash then dropped a 7.5 and 8.5 for "Vaudeville" and "Jonestown 2," further cementing D-Sisive's reputation as a quality emcee. All five of those reviews have run the gamut on what can be said about D-Sisive. They've explained all relevant facts of D-Sisive's life that a rap fan might need to know. They've used almost every adjective acceptable to rap fans to describe D-Sisive's music. My previous review even hit into that emotional area where my passion was very apparent. It's at his point when you realize that sometimes it just comes down to fact that music has to be experienced and no amount of words are going to substitute for listening to the music itself.

That said "Run With The Creeps" is D-Sisive's latest album and, getting to the point, it is more of the same high quality music D-Sisive has been making since "The Book." Not that D-Sisive's music could ever be called "happy," but this time around D-Sisive is darker than he usually is. There is no "West Coast" or "I Love A Girl" on here to put a smile on your face. In fact, this is probably D-Sisive's darkest album so far. "Run" opens up the album and D-Sisive declares "this is the music I'll be listening to when I die" and from the menacing drums pounding in the background it does not sound like he's expecting a pleasant death. The album's lead single, "GG Allin," finds D-Sisive comparing his artistic journey to that of the late punk rock legend and focusing on the struggle to keep it real. "To The Moon" is the albums most "positive" song and that has more to do with the beat than the subject matter. The song's upbeat drums and stuttering horns give it a soulful energy that belies the fact D-Sisive is rapping about his own funeral and disconnecting from reality. Though most of the songs showcase a somewhat bleak outlook on life, D-Sisive's skill behind the mic and ability to blend storytelling and personal experience keep the album interesting despite the repetitive vibe.

So there you have it, all you need to know about D-Sisive's latest album. If you're already a fan, chances are you only checked this review to make sure D-Sisive hadn't pulled an "Electric Circus" on us, you can sleep soundly tonight. If you're new to the site or still on the fence about D-Sisive, just consider the fact that four different critics with different backgrounds have come to the same conclusion time after time. If you're still unsure about dropping your hard earned money on "Run With The Creeps," the least you can do is go checkout "Jonestown" or "Jonestown 2" - they're free to download and well worth the time and effort.