AWAR :: The Laws of Nature 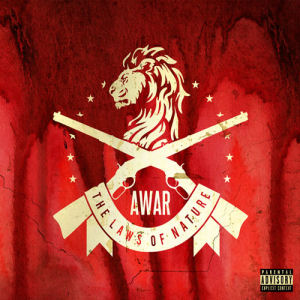 It wasn't hard to get excited about reviewing AWAR. Reading the back cover of the album was like a who's who of hip-hop production: The Alchemist, Jake One, Nottz, Vanderslice and M-Phazes just to name a few. The Albany, New York based rapper didn't get to the point of coalescing this much talent overnight - he's been recording and releasing material going back to 2005. It may simply be his bad fortune to hail from the 518, when most rappers that get pub out of New York come from New York City and its associated boroughs and projects. Clearly that hasn't stopped AWAR from hustling harder to get noticed, and it may be a sign of his confidence in "The Laws of Nature" that the album's front cover logo is printed with a reflective gold-colored foil. No one would pay the extra charge at the printing press for it if they couldn't sell it. And yet to hear AWAR tell it on the Alchemist laced "Tunnel Vision," money is the furthest thing from his mindset:

"Take my chances in the land of criminals
The industry probably lookin like a Satanic ritual
I'm just tryin to be me, logic and reason
They care less unless it's profit they seein
Call it a 360 deal, we not in agreement
Modestly speaking yes hip-hop needs this
Walkin a tight rope between great white hope
and slayin microphones - I just write to cope
And now they see my life under a microscope
The radio don't give the fans the right to vote"

It's not just that AWAR pulls great producers for "The Laws of Nature," he also pulls in highly recognizable names from the underground rap scene. Has-Lo joins AWAR on the Jake One banger "Stairsteps." California emcee and producer Evidence jumps on the pounding bars of "Never Break Me," but the Ev-esque beat is actually a Vanderslice work of art. If you thought LaToiya Williams only sang on Snoop Dogg songs "I Arrived" will come as a surprise, and if you thought Stat Quo had vanished from rap "Take a Moment" will be one too. Even the bonus track is a "Standout" thanks to M-Phazes and a guest appearance by Slaughterhouse all-star Joe Budden. With all of that going on though the track that jumped off the page the most to me was "Strictly Business." I'm old enough to remember and cherish the song and album of the same name by EPMD, so coincidence or not anything sharing the name must come correct.

"Born crazy - they say I ain't in my right mind
I'd rather be a lion for a day than a lamb for a lifetime
Been undervalued; now watch my fuckin price climb
Belong on big stages, I stand where the lights shine
Classy presence - diamond studded cufflinks
Leave a lasting impression like a brass knuckle fist
Black duffel zipped, I kick in rap's revolving door
Wavin the revolver around while y'all crawl on the floor
My bonds are mature, I got my own best interest
Lessen the dent by invest in the imprint"

The Alchemist track and AWAR rap have nothing to do with the classic hip-hop namesake, but they don't do it a disservice by being mediocre musically or lyrically. AWAR shows himself to be a thoughtful emcee throughout "The Laws of Nature," although on occasion he comes across as overly meticulous about his flow and his bars. That's not to say his delivery is forced, but more that he takes his "great white hope" punchline a little too seriously and feels he has to represent for every other caucasian emcee to come out of New York state. Songs like "Elephant Gun" suggest he shouldn't worry about it though, because when he relaxes a little bit and enjoys the quality Jake One beat his personality, flow and sense of humor come out stronger than before. Songs like "Until the End" featuring MURS and Nottz prove that like its title, AWAR is here for the long haul. He deserves a higher level of recognition than he's had until now.