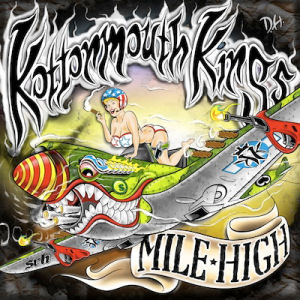 With remarkable consistency the Kottonmouth Kings release a new album almost every year like clockwork. This keeps a worldwide legion of stoned fans puffing on their latest hit, while keeping the Kings themselves chronically on tour supporting their releases. "Mile High" is the latest of these releases to spread like ditch weed, but I must confess that at times the whole thing can seem incredibly insular. You either know the Kings or you don't - you either see them on tour or you don't. This is something the Kings acknowledge themselves on "Kottonmouth Bitch" - the fact that (1.) their music doesn't crossover much and (2.) they don't care.

"It's a shame how we bring the ruckus
Radio critics and the media duck us
Then you got all these punk muh'fuckers
Suckin on nuts but they still can't touch us
It's disgustin, they still won't discuss us
Fuck your awards, cause the real people love us"

After nearly 20 years of making rap music they are entitled to this attitude. Their albums have been successful despite only occasionally drawing mainstream acclaim, and any critics who have derided their obsession with pot have only made their more popular with a loyal stoner audience. As they say on "Kottonmouth Bitch" that "could be one of the reasons why we stay underground." The other would be that their rip-rock psychedelic hip-hop doesn't necessarily translate well to other contexts; furthermore there really isn't anybody else in rap who can do that style and get away with it. If this is your first exposure to the Kings, don't expect warm soulful R&B samples, funk synth loops, AutoTune or Alchemist. Their sound is closer to Nine Inch Nails and Skrillex than Nas and Snoop Dogg. The closest they get to a mainstream rap sound (and it's not that close at all) is on tracks like "Hold It In."

Any parent who found their kid in possession of an album like "Mile High" would understandably be nervous. Like every Kings album that came before it, references to pot are frequent and blatant, announcing themselves in song titles before the tracks even play. "Green Dreams" are made of weed, and who am I to disagree? If you want some, "Get Some." Don't be stingy though, "Roll Us a Joint" and make sure you're "Packin the Goods" at all times. Even their "Honey Dip" with Mickey Avalon is a double entendre, so it's clear that "the type of girl that's always got (them) on the high life" doesn't need more explanation. Let's be real with each other - there's nothing at all medical about their marijuana. It's recreational and they'd rather it was legal. I'm not sure that's a bad idea.

Depending on the kind of "High" you want, this album comes in many different flavors, with everyone from Best Buy to F.Y.E. to Hastings offering different exclusives with your purchase. At its core though this album is 18 tracks and almost 80 minutes long, so if you're a hardcore Kottomouth fan you have to be ecstatic about their sheer amount of music to toke up. If you're more of a casual listener, the volume of material here can be a bit overwhelming, even before the bonus tracks get factored in. As for their rhymes and production D-Loc, Johnny Richter, Daddy X, The Dirtball and DJ Bobby B are as consistent as their yearly album releases. That's good news since their style, insular and self-referential as it may be, never devolves into an unlistenable musical mess. That's also bad news since it's increasingly in danger of going stale like an unsealed bag stuffed in your couch cushion haphazardly. "Mile High" delivers a good buzz, but beware that a new crop of smoked out rappers like A$AP Rocky, Smoke DZA and ScHoolboy Q could steal their market with a more potent strain of music.