:: 679 Recordings/Atlantic
as reviewed by Matt Jost 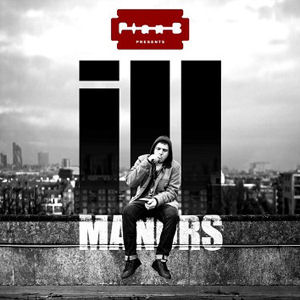 I went into "Ill Manors" with the preconception that it was an act of atonement for "The Defamation of Strickland Banks." After hitting big with a fictional drama told through lots soul music and a little bit of rap, it looked like a return to rap's and Ben Drew's stomping grounds. As it turns out, "Ill Manors" is not only that, it also actually trumps its predecessor in that it is accompanied by a feature film of the same name. Or rather, given filming budgets and workloads, it's the album that accompanies the movie.

Acting gigs, smaller directorial ventures and last but not least the success of his sophomore effort enabled Drew to realize the project that had been in the works since before "Defamation." I haven't seen the film, so I can only speculate as to the degree the songs here correspond with the content of the film, but it would probably not be completely wrong to say that "Ill Manors" the album deals with the same issues as 'Ill Manors' the film, just moreso on a musical and poetical level than visually and verbally.

Plan B zooms in on the pressure cooker that burst open just a little over a year ago when London and other cities were hit by a wave of civil unrest as adolescents were rioting and looting for several days in a row. A native East Ender himself, he paints a grim picture of the UK's deprived urban areas and its disenfranchised youth. Lead single and opener "Ill Manors" however takes the sarcastic stance first, purposely feeding into the stereotypes public opinion is quick to label troublemaking kids with:

"We're all drinkers, drug takers
Every single one of us burns the herb
Keep on believin' what you read in the papers
Council estate kids scum of the earth
Think you know how life on a council estate is
from everything you've ever read about it or heard?
Well it's all true, so stay where you're safest
There's no need to step foot out the 'burbs
Truth is, here we're all disturbed
We cheat and lie, it's so absurd
Feed the fear, that's what we've learned
Fuel the fire, let it burn"

After thus connecting the project with more recent events, the album dips into the film script as a number of its characters appear in songs. But first Plan B establishes his own role with "I Am the Narrator" - one that takes a rather close look at things:

"Drugs rule everything around me
Thugs makin' money; my manor, manor's ill, yo, ill, yo
Pushers on my block shottin' rocks, this is real, yo
Bitches suckin' cocks for them rocks, yeah they real low
Prossies on the corner with the fuckin' high heels on
Pick 'em up, drop 'em off, yeah they ride real strong
Crack addicts lookin' for other addicts to steal from
walkin' round wonderin' where they get their next meal from
Cokeheads on the red sniffin' up their wages
Dealers on speed dial, suckin' all their papers
Still on the same number that they've had for fuckin' ages
SIM card so old the logo's fuckin' faded
But turn it over and you see the gold nugget
reflectin' off the light that shines down above it
Unregistered chip, you gotta love it
Pay as you go, so the feds don't bug it
Twitter for the streets, if you want tweets
11 little digits and the blow is all you need
Tell me what's your poison, they got everything from weed
up to methamphetamine; everybody follow me
And join up to their anti-social network
Database of smack, coke and crack-smokin' experts
Without it they go out of business and no longer get work
So anybody tryina fuck with is gonna get hurt"

Such is the environment two of the movie's protagonists come up in, Chris, who, as "Drug Dealer" suggests, is virtually born into the trade, and Jake, who can't escape the iron grip of gang life, as detailed in "Playing With Fire." Meanwhile female prostitutes Michelle and Katya have their story told in "Deepest Shame" and "The Runaway," respectively.

With the majority of songs featuring dialogue from the film, one could get the impression that "Ill Manors" isn't meant to stand on its own. With great detail paid to the album's score and Drew acting as a committed narrator, though, the unrelated episodes don't distract from the overall mood and message. In fact "Ill Manors" allows for thoughtful moments the movie might not. "Pity the Plight" for instance is interspersed with movie dialogue and framed by punk poet John Cooper Clarke (who also appears on-screen), but it's unquestionably a self-contained, chilling piece of rap music. It's telling that the only song that doesn't really fit into the album's flow, "Great Day For a Murder" (which plays like a payback to the nation's tabloids), has no immediate connection to what's happening in the film.

Unlike the pop rap that is frequently peddled to the domestic audience, on "Ill Manors" all musical and narrative elements serve an artistic purpose. Plan B knows that both good music and movies depend on a variety of factors, and his artistic abilities bring forth brilliant verses, operative hooks and an ingeniously orchestrated soundtrack that borrows from classical, punk, pop, soul, reggae, dubstep and drum 'n bass but still retains the attitude of hardcore hip-hop. It also should be noted that Plan B couldn't voice godforsaken despair as credibly as he does on "Lost My Way" had he not discovered his inner soulman. By the same token his singing is able to provide a glimpse of hope towards the end, on "Live Once," the track featuring the album's only (needed) guest MC, Kano.

UK citizens are arguably in a better position to appreciate or dismiss "Ill Manors" than this reviewer. But there are just as likely Brits who are altogether unwilling to even consider Ben Drew's viewpoint. Looking at it from the perspective of a publication called RapReviews, "Ill Manors," depressing, blunt and provocative, fulfills one of rap music's most noble tasks - to touch the sore spots. Plan B doesn't present a remedy for all these social ills, but he makes it abundantly clear that economic disparities eat away at social cohesion and that in the United Kingdom, like everywhere in the world, the kids can only shape society's future in a positive way when the adults don't mess up the present.