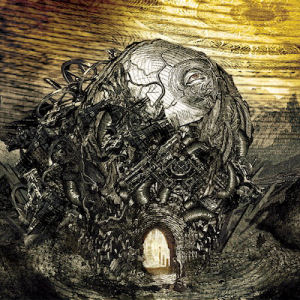 What is 3:33 exactly? That's far from an easy question to answer, though Patrick Taylor gave it a good go last year. The answer is at first glance deceptively simple - it's a group promoted by Parallel Thought, when he's not making albums with Del the Funky Homosapien and Tame One. That conclusion is quickly unraveled once one delves into a 3:33 album. One line from the press release comes close to scratching the surface of the experience: "3:33's time seemingly repeats itself in an infinite unfolding of madness and confusion." Key emphasis on the words "infinite" and "madness" here. It soon dawns on the listener that 3:33 is a group slash entity that are a little bit "weird" and tend to operate only in the theatre of the instrumental.

These explanations are only going to get more convoluted as we go along. I would give you direct audio samples were they available, but since this album doesn't come out until Devil's Night (a perhaps purposeful coincidence) there are no clips on Parallel Thought's YouTube channel. On the other hand if you play his remix of Bone Thugs-N-Harmony, then try to imagine it without lyrics, you'd start to scratch the surface of what's happening here. The artwork for this album and the previous 3:33 release suggest a Lovecraftian mythology, and on this one in particular it looks as though you'd be walking into a building that's half organic and half electronic - with tentacles growing out all sides and one ominous eye overlooking the landscape. You have to stare at the picture for a while as you listen to almost completely unnamed tracks like "ITMOI-6" and allow yourself to sink into the murky depths. This is an album to listen to in the dark. It might even help if you're high.

Sticking with "6" for a moment as an example, there's an overarching sound which one could choose to call "hip-hop" in some contexts - a pounding bass, hypnotic drums, and the sense of freeform experimental song construction which rap has always had in brotherhood with jazz. One quickly realizes how far "In the Middle of Infinity" steps outside of those traditions though, as the haunting background noises fade in and out, sounding like a call sent out into the cosmos to summon hideous eternal monsters of old. Then the "boom bap" disappears altogether, leaving you only with that depraved siren song, and then it comes back, and then it disappears again and folds back unto itself and doubles up. It can leave a listener feeling quite lost and helpless, which I can only tell you the reader is what I surmise to be Parallel Thought's intention.

3:33 "In the Middle of Infinity" is a disconcerting and bold sound which is definitely not for the timid ear. You will not be comforted with familiar references to pop culture, nor with samples of your favorite movies and TV shows, and there's no emcee to bring any levity to the proceedings. This music feels dangerous. It's [adult swim] bump music if every track they used was 6:66 in length, which may be where the inspiration for the name came from. Half of Hell is still Hell. There are three audiences I'm almost sure would enjoy this album: zombie movie fans, horror con attendees, and the clinically insane. I'm clearly in at least two if not three of those categories because this Cthulhu inspired music both scares and excites me. It may make you draw pentagrams in the dirt with a stick if you bump it in your headphones too long. As long as you're not shedding the blood of innocents in the process, I'm fine with that. Take a vacation from your sanity and wander into "Infinity" for a little while.