Soldjasoulz :: Soulz of the Storm :: Bandcamp.com
as reviewed by Steve 'Flash' Juon 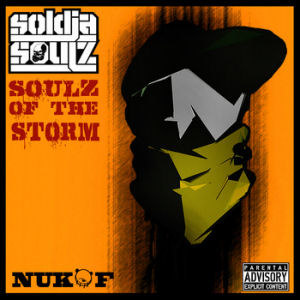 UK month continues with a look at the Soldjasoulz, the hip-hop duo of DPF and Reds, both hailing from Norwich. I took the opportunity to educate myself not just about the group but about the city that they hailed from, which is older than any settlement in the United States, pre-dating even European voyages to "discover" the West (Spain or Norway - take your pick). It seems to be generally accepted that it was built on the ruins of a settlement abandoned by the Romans at about 450 AD, and by the 11th century had become the second largest city in England other that London. Famous exports include Colman's mustard and the Premier League football club Norwich City. (Soccer for the yanks reading this.) It's considered to be a prosperous area with a temperate climate, and census figures peg Norwich at over 93% white, with a small but significant minority of Asian ethnicities.

Now if this doesn't sound like a hotbed for fiery hip-hop compared to the roiling economic, social and political turmoil of the London metropolitan area, perhaps you've drawn the same conclusion I did. Nevertheless the Soldjasoulz bio professes their music "owes as much to dancehall reggae as it does 1990's hip-hop" and that their work has impressed a wide range of artists on both sides of the pond and gotten them billing on the same stages as Souls of Mischief and Klashnekoff to name a few. Three selling points caught my eye beyond that though - the three tracks produced by Tricksta, the guest appearance by Main Flow on "Night Breed" and the fact it was offered at "name your own price" via Bandcamp - perfect for a first-time foray into their musical offering.

"Engraved in your mental, yeah the rebel sound
Pull it up pull it up 'til we done got the message out
It's the Soldjasoul mind-blowing Irn-Bru
Brewed by bylines fly from the viral
type of flow ravenous, hacking off legs
One-two step, I drag you through my vortex
Welcome to the flipside, midnight soul search
The rhythm hit 'em, strip it down like it's yo' girl"

I'm about 80% sure on those lines from the Reds produced track "Cutblood," but I'm basing at least two lines on my knowledge of the Scottish soda I could swear they're referencing - so if I missed on that feel free to paddle my arse with a cricket bat. The accents here are a little thicker than I'm used to from other UK rappers, and have less of the Jamaican/West Indies/Carribean accent than I'm familiar with. It helps that their production tends to lean toward the electronic and minimalistic, creating a spartan sound that their flows carry over well. It also adds an air of intensity to the music that the genteel surroundings of Norwich might not, making songs like "Big Kahunas" have a sharp edge that slices your ears in a most pleasant way.

Now I did mention a cameo by Main Flow, and it's fair to say that after not having heard much from him in the last half decade his guest bars on "Night Breed" hit the spot. It's a somewhat eerie track too, which as an instrumental alone would be perfect for the Halloween season. Even Tricksta's tracks tend toward the minimalistic sound the Soldjasoulz crave, as "Storm Warning" is almost underproduced and "Body Bag" is as "cucumber cool, calm calculated" as the lyrics on it profess to be. The closest you get to a lush layered sound is on the closing three tracks produced by I.C., including some lovely bells and flutes on "Know Ya Roots" and the sinister intensity of "Late Night Raw" that you could picture a Sticky Fingaz cameo on without much effort.

Soldjasoulz have created a winner on "Soulz of the Storm" by creating a UK hip-hop sound which is distinctive from their counterparts in more well known urban centers you've heard hip-hop exported from. As for the rappers themselves, I'm a bit non-plussed at their verbals. Nothing strikes me as atrocious, but nothing strikes me as outrageously good either. I can quote from their songs with a bit of effort at discerning the accent, but once I do there's not a huge amount of memorable punchlines or superbly illustrated social commentary that would stick with me unless I listened a hundred times. That's not to say their music is fluff or pop, it's certainly not, but the rhymes need to be as edgy as the music and I suspect they need more time to develop that area of their craft. This album is a step in the right direction but it's only the first of many miles to come.