D-Sisive :: Jonestown 3. The Dream Is Over :: Bandcamp/URBNET Records
as reviewed by Steve 'Flash' Juon 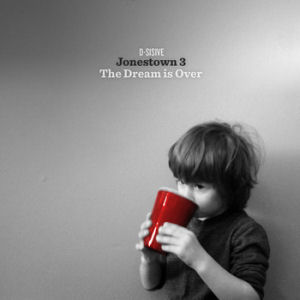 "Jonestown 2" didn't make my list for Best Albums of 2011 for one reason only - D bumped himself off the list. His free album was good, but his commercially released record for URBNET was just that little bit better. That doesn't mean "Jonestown 2" was any less of a revelation. The chronically dour Toronto lyricist turned his self-flagellation into hatred for mediocrity, and instead of accusing today's rappers of being weak, he accused the fans of being mindless sheep for "drinking the Kool-Aid" for whatever was #1 on the Billboard charts. Newcomers may have found it a turnoff, but longtime Derek Christoff fans understood his frustration, given he's always critically acclaimed yet far from a household name. It's not unreasonable to expect listeners to educate themselves about the best artists, especially if they claim to care about the art and the culture, rather than simply taking whatever pablum is churned out by conglomerates.

"Jonestown 3" is no less of a challenge to the listener, and that includes the fact it's a name your own price release. Mr. Christoff isn't going to tell you what this album is worth, he'll let you decide, and if you decide it isn't worth a penny he's not going to come after you for it. Janet Jackson and Luther Vandross once claimed "The Best Things in Life Are Free," and maybe that's true with a D-Sisive album, but if you're the discerning rap listener that he's seeking out there's a fair chance you'll wind up wanting to fork a little money out. The album is produced entirely by equally acclaimed artist Muneshine, and his attention to detail shows in songs like "Pajama Pants." The title may seem silly or trite - the track is anything but. Multiple layers of samples and instrumentals weave in and out of the background, as Christoff paints a picture of the very day that his life began anew.

"Cold french fries from last night lay
beside dried ketchup on a white plate
With crumbs from a baked apple pie
and a cheeseburger bite that helped add to my weight
... I pressed play on my iPod
Sitting on my dock, fully charged
+Pet Sounds+ serenades through the speakers
Wouldn't it be nice if these dishes were, washed?
Heh - hot water and dish soap
Bowls, plates, forks and chopsticks soak
I scrub dirt and rinse suds
I sing and hum with the voice of Brian Wilson in love
In love with the thought of walkin' out this basement
apartment and follow a road less travelled
An ostrich singing out Orville Noblich ballads
The story of an artist"

D-Sisive gets more personal with the listener than most artists are expected to, or possibly even should. He lays his life open like his rap songs are his diary, and instead of tearing out or redacting pages that are too personal to share, he puts them under a microscope and magnifies them thousands of times. He's got a sense of humor which is sometimes dark and macabre (hence using "Jonestown" in album titles), but he often pulls the wit out at the moment you least expect it. "Friend of Mine" is ostensibly about a crush he has on a fly lady, but turns into him making fun of both himself and Marvin Lee Aday.

"I was in a pair of sweatpants
They were Jordans that I paid $80 for
Thefore designer sweatpants
with the shoes to match
I was never fashion forward, but I have an eye for beauty
And you caught it like a shortstop
Sorry if I'm being cornball, quoting a Meat Loaf song
But I knew that moment
I would do anything for your love, and fuck it I would do that
Whatever that is - I dunno
Meat Loaf's pretty big - maybe cut carbs?
If that's it, I'll pass on the garlic bread
if you accept my invitation to have
a plate of spaghetti with me - I'll order salad and
I'll wear dress pants, and dress shoes
If that'll impress you"

For the late arrivals who haven't already drunk his Kool-Aid, D's voice is your classic enigma wrapped in a riddle surrounded by a London pea soup fog of thick mystery - and he's The Ripper lurking in the shadow. "My voice is not what you should walk towards; never follow" quips Christoff on "All My Friends Are Dead." He's not imbued with the typical charisma of your typical rap all-star, and both rapper and audience are the better for it. No matter what speed he's rapping at, whether the up-tempo "Tell Me Different" or the methodical "Station 135," each word is delivered clearly. "Clearly" as opposed to "precisely" at any rate, because these are not antiseptic surgical cuts from an overly intellectual emcee. He challenges the listener with statements like "you can't tell me how to end my song," then pulls you fiercely into his embrace on the piano and crooning ballad "WhenWeDieWeDieTogether." The pace may throw you at first, as syllables come 1-2-3 1-2-3 instead of 1-2-3-4, but his voice quivers with each heartfelt word.

Derek Christoff is not an easy artist to get a grasp on, but with each Truman Capote reference he pushes the envelope of what your idea of rap music is and what his idea of HIMSELF is, both of which are worthwhile endeavors to pursue. At times he can seem bleak, but it's his penchant for filling a flowerpot with piss and making it rain on his own head that makes you stop to observe. Maybe you laugh, maybe you're repulsed, maybe you're inspired by his satirical outlook on the world - you're never not affected by his work. When that work is paired with an outstanding producer like Muneshine, the result is "Jonestown 3" - a complex, emotional and provocative journey where "The Dream Is Over" yet the music still lives on.